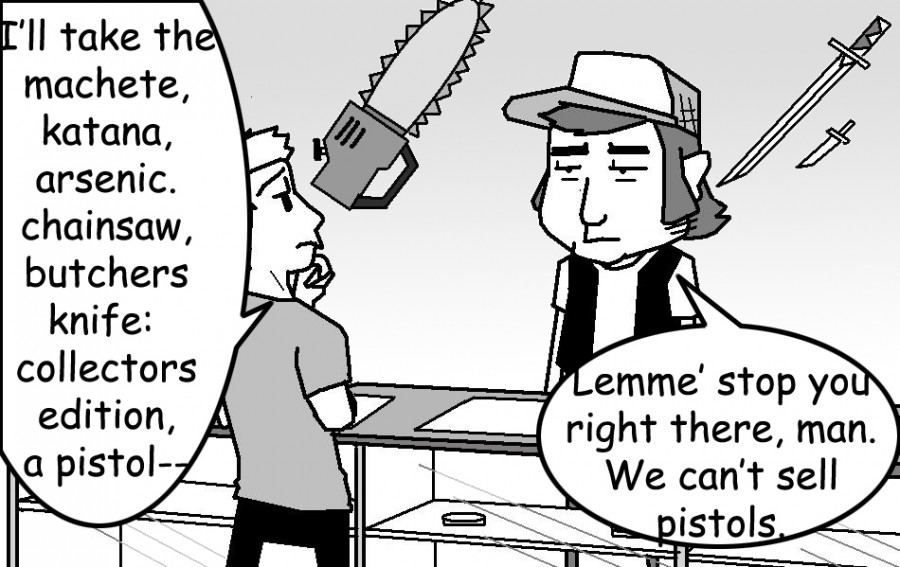 A significant number of TTAG’s Armed Intelligentsia are law enforcement officers. Despite Vice President and Gun Control Task Force Führer Joe Biden’s recent suggestion that cops are ready to march in lockstep behind new gun control legislation, many aren’t. Reader L.C. Judas, for example, who penned this pro-pistol polemic on our behalf.

“I’m a gun owner. It isn’t a crime but it appears the mentality now is to treat it like one. Just this morning in fact, I was accosted by my mother. She demanded to know if I was trafficking weapons and wanted me to know that I “looked like Columbine” for a literal quote of what she actually said. The fact of the matter is I don’t deal arms and I don’t have any shootings planned. I own rifles with magazines, two in fact. THAT is the only reason I could imagine for the most annoying conversation I’ve ever had with the woman who brought me into this world . . .

The fact is that a lot of the anti-gun legislation supporters feel the same way. That someone with multiple guns is committing a criminal act by ownership or just a hair away from committing unthinkable acts. Hence, they are trying to criminalize ownership by guilting the country as a whole with their opinions because they feel they can decide what’s good for us.

The flaw in that logic is simple: no one has the right to tell anyone else what is good for them. Assault Weapon Ban legislation on the scale that they are talking about seeks to do the one thing laws cannot do: think for the people.

No matter what you ban and why you do it this will not change someone’s personal judgements, past, present or future. You cannot make a law that will change the way the people as a whole or individually will think.

Murder is already illegal in all fifty states and all US territories so no amount of additional legislation will change what happens in the future when madmen break the law in that respect. Murder charges do not deter them and making logistical hurdles is exponentially harder on the rest of the gun owning community as a whole than it is on the very few who make it their missions to harm others for no reason at all other than personal satisfaction.

The legislation is in response to a tragedy, one I cannot possibly understand as I’m not a parent and will not spout hollow sympathies and insult those victimized. It was perpetrated by a madman and I am hurt as a human, gun owner and law-enforcement officer and it boggles my mind; that’s all I can say regarding the bloodshed. Additional laws will not change what happened and the fact remains that the laws in the state of Connecticut kept Adam Lanza from getting weapons legally. He killed his mother and took them.

So now we are at an impasse. Does this mean his actions merit laws that will only punish the law-abiding citizenry who actually go through the legal channels to own firearms?

The fact remains that madmen who shoot people on a mass scale for their own very hard to understand reasons are vastly in the minority. Millions upon millions of gun owners have lived entire lives without firing a single shot in anger at any human being. Shall we punish them to ATTEMPT to punish FUTURE spree shooters and drag every gun owner currently living in the country of the United States of America into a political debate based around tragedies that, while utterly abhorrent, are less common than accidental deaths in pools and public waterways each year?

The last sentence above is not a hyperbole. In this past year 137 children drowned to death in the US.  No less bright and happy than any of the children who were shot. No more deserving of a premature end to destiny. Yet, that statistic doesn’t make the news and hover in the media like a gory medallion of what some people are capable of.

I will not be inane and place more statistics here but the fact remains this is a national tragedy and a crime. To that I say this:

Legislation against the sale and ownership of semi automatic weapons is not going to work. Those are already well-proliferated through the country and it isn’t the guns that are the main problem.

Banning guns will not ban spree and mass murder nor will it curtail that impulse in the minds of those who wish to do so.

Crime is not legislated against when it rises. We fight it with ingenuity, willpower and police work. When cars started getting stolen, car alarms, The Club and unique car keys with chips inside them were invented and cops started finding patterns to catch thieves in the act, be them location, time of day or the type of car taken. We didn’t legislate against locksmith equipment, crowbars and screwdrivers or the ownership thereof to stop thieves. Doing so would not have helped.

If the world at large is full of people who want to cause harm, trying to disarm them won’t take away their ability to harm. The usage of whatever is available up to and including bombs and poison gases or simple arson is historically just as much a mortal threat to large groups of people as flying bullets from a semi-automatic firearm.

Crimes of violence are not stopped with laws, they are stopped by disabling or apprehending the offenders before the victim count starts or escalates. Laws are to PUNISH those offenders caught in the act not to use as a tool to control the population as a whole.

Adding more ordinances to the purchase, ownership and sale of weapons deemed “too dangerous” or magazines above an arbitrary “high capacity” benchmark would not have made a single difference to any of the spree shooters in the past but they will make a huge and unneeded difference with the legitimate shooting society of this country.

You cannot put the many law-abiding and peaceful through hurdles designed to deter violent criminals based on the actions of such a small margin.  This in effect means you are willing to treat all gun owners like soon to be mass murderers. That is not right in any context because it is not true.

Even if it were conscionable to place the additional rules in place to effect the entire law-abiding public, the measures of control still may not even encompass the criminals it is aimed at when it is all said and done.

The amount of the dangerously deranged proportionally is smaller than the margin of error encountered when taking a poll or tabulating the masses. Assuming a margin of error of two percent you will still be well over the less than one percent of criminal gun owners who bought weapons legally and thusly logistically you will not be able to confirm making a mathematical difference because it could simply fall into the margin of error.

No, that does not bring anyone back to life or justify what has happened in any of the mass murders but the fact remains the amount of legitimate gun owners versus the amount of spree shooters is infinitesimal. Making a law to attend to only the most deranged when they are set on breaking the laws and beyond reason anyway is inane and redundant in the most literal fashion while exceedingly inconvenient to the other innocent millions who own guns who haven’t done anything to anyone.