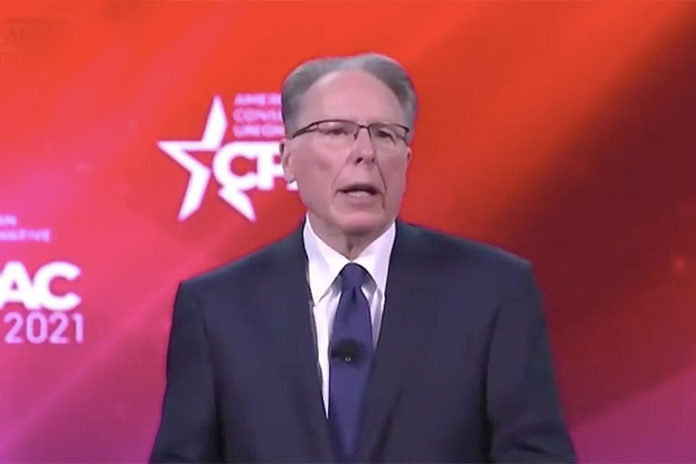 It was vintage Wayne LaPierre today as the NRA’s Executive Vice President made his customary annual appearance at the Conservative Political Action Conference earlier this afternoon in Orlando.

He hit all the usual notes, slamming gun-grabbing politicians for blaming firearms for every societal problem. He called out big city mayors like New York’s Bill DeBlasio, Chicago’s Lori Lightfoot and Houston’s Sylvester Turner for going after law-abiding gun owners while failing to enforce the laws already on the books and allowing crime to soar in their cities.

LaPierre hit Biden, Pelosi and Schumer for using homicide statistics in their “warped crusade against the Second Amendment.” While telling his somnolent audience that the anti-gun left would rather let prisoners go free while defunding police departments, he announced that the foes of the right to keep and bear arms . . .

If you’ve heard any LaPierre speech, you’ve heard this one — in one form or another — a hundred times before. Just replace a couple of names here and there and LaPierre’s handlers could have (did?) copied and pasted the text for today’s speech from any of his others. The CPAC crowd certainly responded as if they had.

One aspect of Wayne’s address did break a little new ground. He actually briefly addressed the fact that the NRA has asked a US bankruptcy court to bail them out of years of bad decisions and protect the Association from the existential threat posed by New York Attorney General Letitia James.

LaPierre claimed that the AG’s attacks and New York’s attempts to force financial institutions to quit doing business with the NRA “…only strengthen our resolve. They steel us for the fight.” Good to know.

Part of the reason LaPierre’s stem-winders are so repetitive is because, in fact, the threats to Americans’ Second Amendment rights are very real and never go away. The cast of characters — politicians, gun control orgs, their media stenographers, among others — may change slightly from speech to speech and year to year, but their resolve to achieve civilian disarmament in this country never diminishes. So you should excuse Wayne, at least partially, for sounding repetitive.

Unfortunately, that doesn’t make for engaging oration. The CPAC crowd seemed to be more concerned with scrolling through their social media accounts than listening to Wayne’s recitation of what was scrolling by on the TelePrompter.

LaPierre and his act are old and stale. With a few exceptions, they’ve been fusty and uninspiring for at least a decade. And now that so many of the missteps, mismanagement, profligacy and alleged corruption that have been commonplace under his leadership are out in the open for all to see, performances like today’s have become downright embarrassing. We’re years past the time for someone in the wings to give him the hook.

The good news is, we happen to know that the NRA is actively seeking his replacement. It would be good if that process is concluded as quickly as humanly possible. There’s a decent chance the bankruptcy court won’t give the NRA the protection it’s asked for. Whatever the outcome of that move, the process of flushing the management group at the National Rifle Association and rebuilding the Association in a way that serves its members and more effectively fights for Americans’ gun rights can’t begin soon enough.