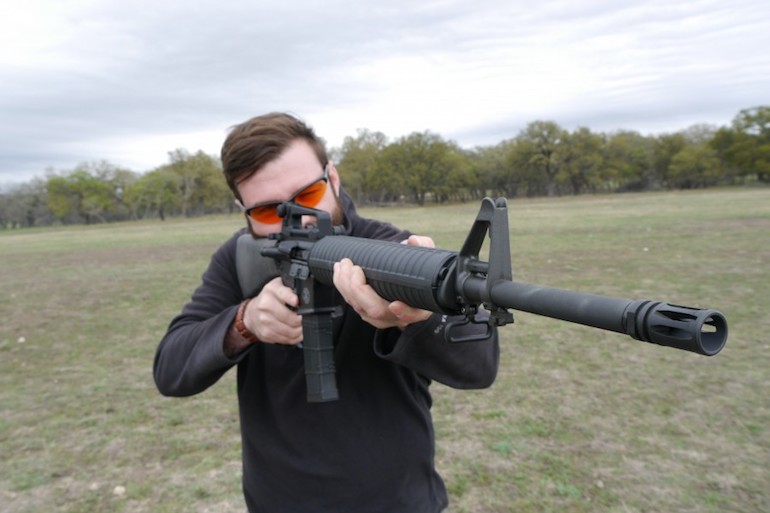 Conversations with “precision riflemen” often get into tedious, esoteric mathematical realms, and usually very quickly. Many factors influence the bullet during the brief fraction of a second (sometimes longer) while it is in free-flight between when it departs the muzzle and the point of ultimate impact (exterior ballistics), but the two main ingredients are:

Density of air varies, of course, with elevation above sea-level, humidity, temperature, and dust/smoke content. But gravity relentlessly pulls the bullet toward the center of the Earth. Wind blowing against the flying bullet, from any direction, will push it (to some degree) off its still-air trajectory.

There are other variables to consider, from the rotation of the Earth, to “ballistic drift,” to the “Coriolis effect” [ED: aka the aforementioned rotation of the earth] and the gravitational pull of Jupiter. The bullet’s shape, diameter and density [ED: aka ballistic coefficient] also affects the way it passes through the air, as well as intermediate impact with grass and brush.

All of these are of concern mainly to the artillery officer; they’re generally irrelevant for the practical rifleman.

With modern, autoloading military rifles, the bore-line/sight-line span is six centimeters (2.5 inches). Any bullet that impacts within a circle with a six-centimeter radius is sufficiently accurate for most serious purposes.

So, the instant our bullet departs the muzzle, it is already six centimeters low. With sights adjusted correctly, the bullet will then climb until it crosses the sight-line. With 5.56×45 (223) caliber, I recommend this intersection take place at 40m. This is the “initial intersection.”

The bullet then continues to rise until, under the influence of gravity, it starts to fall back toward the sight-line. This highest point in the bullet’s flight, the “maximum ordinate,” is reached at 140m. At this range, the bullet is six centimeters above the sight line, but no more. 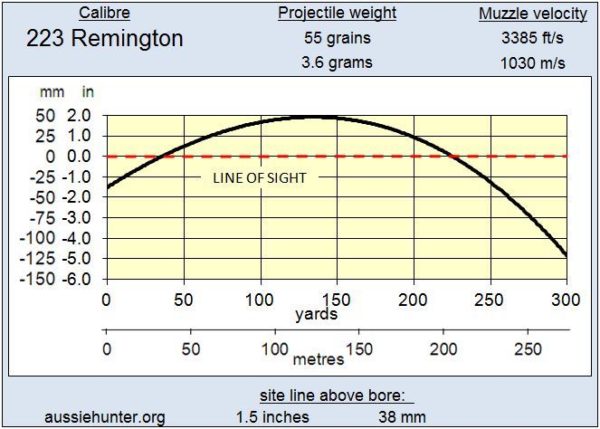 As it continues downrange, the bullet then falls back toward the sight-line, crossing it once more (this time on the way down) at 240m. This is the “second intersection.” The bullet then continues to fall until it is, once again, six centimeters below the sight-line. This takes place at 260m.

So, between point-blank and 260m, the bullet is never more than six centimeters away from the sight-line, “all other things being equal.”

We call this “maximum point-blank range,” or MPBR. Beyond 260m, we are in the “back-curve zone.”

The foregoing holds true only when the rifle, as it is fired, is perfectly vertical. When a shooting firing a rifle from a “rotated” position, the six-centimeter standard collapses after 150m. Thus, I tell students that their M4 is basically a 150m gun. Within that range, it is deadly accurate, no matter the shooting position, no matter the wind, no matter most other factors.

The “back-curve zone” is that portion of the trajectory which lies between maximum point-blank range and the ultimate point of bullet impact. Any time a rifleman is working in ranges that involve the “back-curve” of the trajectory, that is, after the bullet has fallen more than six centimeters below the sight line (after the second intersection), the path of the bullet becomes harder and harder to predict.

The rotating bullet is designed to remain stable as it travels through air, but only so long as it remains supersonic.

The speed of sound in dry air, at sea level, at 70 degrees F, is 342 m/s (1,125 f/s). Modern rifle bullets are not designed for stability at subsonic velocities. When bullet velocity degrades to the point when it transitions into subsonic velocities, stability progressively suffers.

Today’s snipers use the back-curve zone; and they earn my admiration. But under “field conditions,” using generic military-style rifles, most of us will squander a lot of ammunition trying (mostly in vain) to get reliable hits in the BCZ. When the rifleman tries to sight-in his rifle for a particular, extended range (beyond MPBR), he must adjust the sighting device so that the second intersection will occur at a range that necessitates a maximum ordinate in excess of six centimeters. When he subsequently attempts a shot at a shorter range (without a sight adjustment), it will probably be high.

In fact, the rifle will shoot “dead-on” only at the exact, extended distance for which it has been sighted. Without another, subsequent sight adjustment, “holding over” or “holding under” will be necessary for all other ranges.

The shooter will thus find himself with a “single-purpose rifle.”

When training for real fighting and equipping ourselves with an M4, XCR, SCAR, et al, fitted with a red-dot, in 5.56×45 caliber (we can probably include 300 Blackout also), so long as we stay within the MPBR, you’ll enjoy great success, and stop squandering ammunition on dubious shots.