TriggerTech is a Canadian company that started out making triggers for crossbows and Remington 700s. They’ve more recently branched into the AR-15 market (and a 1911 trigger is currently in the works). Their patented “Frictionless Release Technology” (FRT™) makes their products unique in the trigger world. Although we included TriggerTech’s drop-in AR trigger in our AR-15 Drop-In Trigger Roundup, the product is functionally unique enough that I wanted to take a deeper dive with it and learn more about how it works. What follows is information learned from a couple of conversations with TriggerTech’s CEO and CTO. The heart of a TriggerTech trigger — what makes it different, what makes it patented — is that stainless steel, bearing-grade roller highlighted in green in the drawing above (in real life it’s left steel-colored). Unlike basically every other trigger out there, flat engagement surfaces don’t slide against each other. It turns out this is a big deal for many reasons.

Imagine a flat sear surface and a flat hammer surface, pushing against each other to prevent the hammer from falling. The force on these two surfaces is significant, as they’re holding a lot of spring tension on the smallest possible amount of surface area. In fact, as the trigger is pulled and your finger overcomes the static friction then the kinetic friction between those surfaces, the surface area of the sear/hammer overlap gets smaller and smaller and therefore the pressure on those surfaces increases. 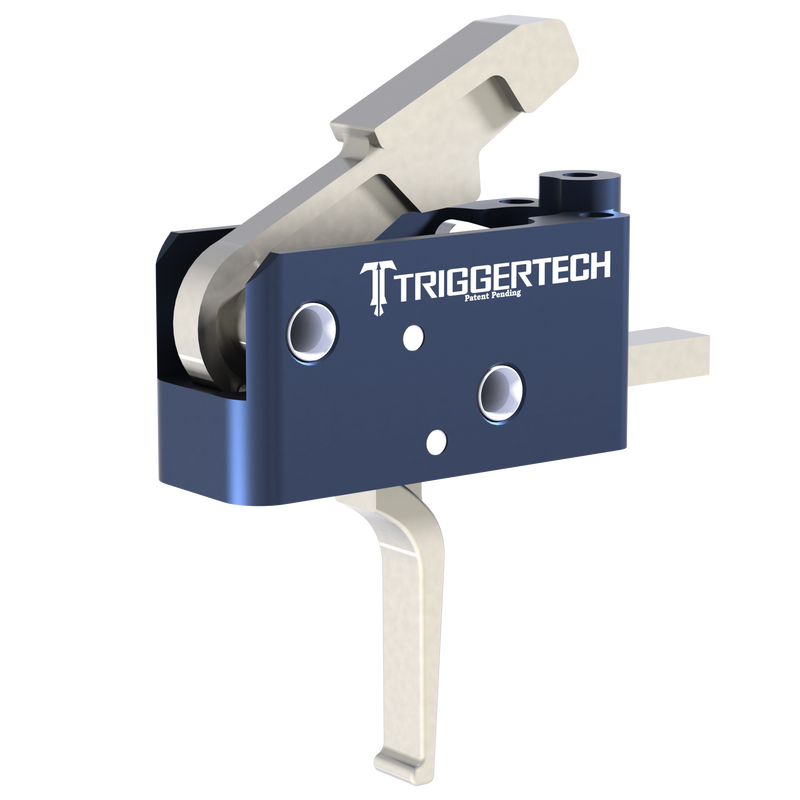 A lot of sear/hammer engagement surface overlap is safer, since it makes the hammer less likely to fall accidently. But that directly translates into more trigger pull distance being required to fire, which is known as trigger creep and is not desirable. To make the crispest trigger pull possible with a traditional sliding friction design, you have to limit the overlap. You have to cut it as close as you can, effectively balancing and trading off between performance and safety. With a free-floating roller bearing between those surfaces, there is no friction to effectively move the sear in relationship to the hammer. The TriggerTech trigger starts with nearly no resistance at all — a 0-lb trigger pull — and then an appropriate trigger pull weight is engineered in. This is one reason it can be so precise and consistent shot-after-shot (as we saw in the Roundup). It’s also huge for safety.

I found it very interesting that the trigger shoe itself — the part you put your finger on — is not actually the same part as the sear. It almost always is one and the same piece of metal on an AR trigger, whether drop-in or component. One reason for that is mechanical advantage.

Due to the pressure and friction on the engagement surfaces, your finger needs to be farther away from the pivot point (where the trigger rotates around the pin) than the sear in order to affect a mechanical advantage in your finger’s favor. A typical AR trigger gives you a 5:1 ratio, meaning when your finger moves five distance units, the sear moves 1. If this weren’t the case, the trigger pull weight would increase substantially. However, more advantage equates directly to more creep, as giving your finger more leverage over the sear means asking it to move farther per unit of sear movement.

Since TriggerTech’s Frictionless Release Technology is, you guessed it, effectively frictionless, no mechanical advantage is necessary. The native pull weight is zero. Instead of a 5:1 ratio, TriggerTech’s triggers have more like a 0.98:1 ratio. The sear surface actually moves more than the trigger shoe. It’s in overdrive. This eliminates creep, and explains why the TriggerTech measured as having the third least creep in the entire drop-in trigger market, despite apparently having much more engagement surface overlap. Apparently the design and performance benefits of the roller bearing system give them a lot of design freedom within the self-contained housing. The AR trigger I tested was designed to feel like a high-end, custom 1911 trigger, but should a version be desired that has no take-up whatsoever and even less creep, they can absolutely make that. The tiny bit of creep that’s in there — so small, mind you, that my TriggerScan unit can measure it but it isn’t detectable by hand — is in there on purpose. Apparently it just feels nicer that way. Another benefit from the roller is decreased wear. Now that the engagement surfaces aren’t sliding against each other under high pressure and friction, they last longer. TriggerTech also uses a Dvorak TriggerScan for their internal testing, and they claim to see identical, perfectly overlapping graphs of the first shot and of a scan after 50,000 shots. Under a microscope, there’s no meaningful wear on the engagement surfaces. Reliability, too, can be improved. But not only reliability, as the quality of the trigger break is also maintained even with a lot of debris in the trigger, as the roller is very effective at kicking debris out of the way rather than trapping it or grinding it into the engagement surfaces. In part because there is no reliance on lubrication, TriggerTech’s triggers perform very well in extreme cold weather. Additionally, nearly every part but the aluminum housing is made from 440C stainless tool steel. It’s corrosion-resistant, and hardened up to HRC 55. Most drop-in triggers are adjustable for pull weight, and most of the TriggerTech offerings are no exception. Where they do set themselves apart here, however, is that they’re click adjustable. Instead of simply tightening or loosening a freely-rotating set screw, TriggerTech’s screw has a spring detent that gives you positive click values. On their Remington 700 trigger, each click equates to a ~1 oz trigger pull weight adjustment increment (~2 oz on the AR trigger), and it’s user-adjustable from ~1.5 lbs to 4 lbs. Again, this precision in pull weight adjustment is because of the FRT — because the pull weight is engineered in rather than being a side effect of having to slide fixed friction surfaces against each other. Finally, TriggerTech sees a commercial advantage that they’re hoping to capitalize on in the near future. One that, from the sounds of it, would benefit all of us. This is apparently the first high-performance trigger that’s suited for mass production with a high-volume manufacturing process. As the engagement surfaces don’t have to depend on extremely smooth finish quality or on flawless geometry, high precision machining (e.g. wire EDM) and/or hand polishing is no longer needed.

High-volume manufacturers could purchase or possibly license and implement TriggerTech’s technology to safely offer match-grade, high-performance triggers to their customers at a desired, high-volume-appropriate price point. Imagine base model bolt guns coming from the factory with an FRT trigger. Overall, TriggerTech’s offerings are feature-rich and are certainly unique on the market. I enjoyed geeking out on some of the technical aspects — especially the mechanical advantage part — and look forward to seeing more from them in the future.