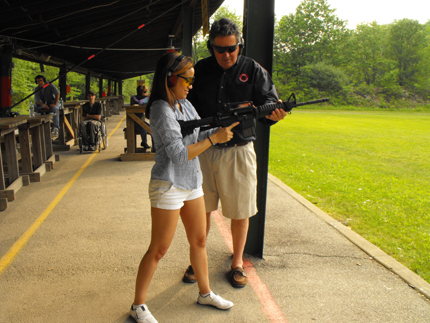 TTAG commentator paul r made this point underneath a recent post:

After reading the interview with [jsonline.com columnist Eugene] Kane, I must respectfully disagree with one of your points. It is simply not true that armed self defense is “easy” without training and much practice. Buying and carrying a gun, without training, makes you dangerous in most instances and not to potential criminals; but to yourself, your loved ones and those who happen to be around you . . .

Firing a handgun effectively and accurately is difficult enough on the range under controlled circumstances. In personal defense scenarios, it is very, very difficult and you do us a disservice by suggesting that the average joe can strap on a gun and be ready to go because this is simply not the case.

Like it or not, people should be trained to carry and operate their gun.

As I told columnist Kane, everyone is entitled to their opinion about whether or not Americans should be able to keep and bear (carry) arms. Obviously, the practice is inherently dangerous for both the individual and society. These potential dangers increase dramatically if the firearms owner is untrained. And?

I could argue that negligent discharges, accidental shootings, crimes of passion and defensive gun uses gone wrong amongst Americans who legally own guns are so rare that they’re statistically insignificant. You can easily and justifiably round that stat to zero.

But I won’t. Every human life is precious. Look at the horrible tragedies caused by untrained concealed carry weapons permit holders (if you can find them). If we can save just ONE life. Yada yada yada. Let’s go back to main proposition: untrained firearms owners are potentially dangerous mo fo’s and I reckon it don’t make no never mind.

The Supreme Court ruled in Heller (and reaffirmed in McDonald) that the right to keep and bear arms is an individual right guaranteed by the United States Constitution. As such, it is up to each individual to decide whether or not to own and/or carry a firearm.

Whether or not 2A rights are good for society is beside the point. Like it or not, the damage caused by citizens exercising their constitutional right to keep and bear arms is no more relevant than the supposed damage rap music creates amongst impressionable African Americans and their communities.

If the majority of our society believes that Americans should not have the right to keep and bear arms, if they believe the country’s citizens are incapable of handling the responsibilities of firearms ownership, or that private firearms ownership is unnecessary, or that it fosters crime, or that it’s just too damn dangerous, those who hold that view are free to repeal the Second Amendment.

These days we must enter the murky waters of “reasonable restrictions” as set forth by the United States Supreme Court in the McDonald decision.

Although, as we have held, the Second Amendment does protect individual rights, that does not mean that those rights may never be made subject to any limited, narrowly tailored specific exceptions or restrictions for particular cases that are reasonable and not inconsistent with the right of Americans generally to individually keep and bear their private arms as historically understood in this country. Indeed, Emerson does not contend, and the district court did not hold, otherwise. As we have previously noted, it is clear that felons, infants and those of unsound mind may be prohibited from possessing firearms.

As TTAG pointed out at the time, this passage is so vague that A) the Brady Campaign to Prevent Gun Violence claimed Heller a victory (i.e. all restrictions are “reasonable”) and B) the ruling opened the door for decades of legal wrangling.

Meanwhile, all gun control advocates and many gun rights activists (not including Mr. Raynolds as I suggested in a previous edition of this post) argue that mandatory instruction qualifies as a “narrowly tailored” restriction. More generally, training requirement is “common sense.” Society and the individual are better off if gun owners are schooled in their weapons’ safe and legal use.

Again, that’s both true and irrelevant. What IS important: firearms training requirements create a barrier to firearms ownership. They cost time and money and stop stupid people from being able to own and/or carry a firearm. Good! you say. Why should we let less-than-entirely sensible people wield lethal force, especially when they can’t follow the four safety rules or hit the broadside of a barn?

Because I’d rather have a nation where citizens can easily obtain a firearm to defend their life and lives of their loved ones than a country where only people considered “safe enough” with a gun may do so.

After all, who decides what’s “safe enough”? The unavoidable answer: someone other than the person who wants to exercise their constitutional right to keep and bear arms. Who do YOU trust with your gun rights? Well, exactly.

And yes, armed self-defense is easy. You remove your gun from its hiding place and aim it at the person in the act of threatening your life. You either pull the trigger and shoot them or you don’t. There’s a lot of other stuff that it would be good to know (for all concerned) but that’s roughly it in terms of the information a gun owner needs to know.

Can a defensive gun use go wrong? Abso-damn-lutely. We’ve reported on DGUs where two combatants emptied their handguns at each other at bad breath distance and both missed. Do innocent bystanders die when untrained [legal] gun owners try to defend themselves with a firearm? Sometimes. Bad things happen, even in a country as fundamentally safe as America.

More to the point, law-abiding citizens use concealed firearms to save their life. (Google “armed self-defense.”) Equally incontrovertible: all law-abiding Americans have the right to keep and bear arms. Period.

Pro-gun rights people who maintain that Americans must have training to carry a concealed firearm do the gun rights movement a disservice. And endanger human life. In fact, the emphasis on firearms training hands a victory to our adversaries, who are looking for any excuse to limit civilian firearms ownership.

Training requirements keep guns out of the hands of the people who really need them—regardless of anyone else’s opinion of their ability to use a firearm effectively. And that ain’t right.