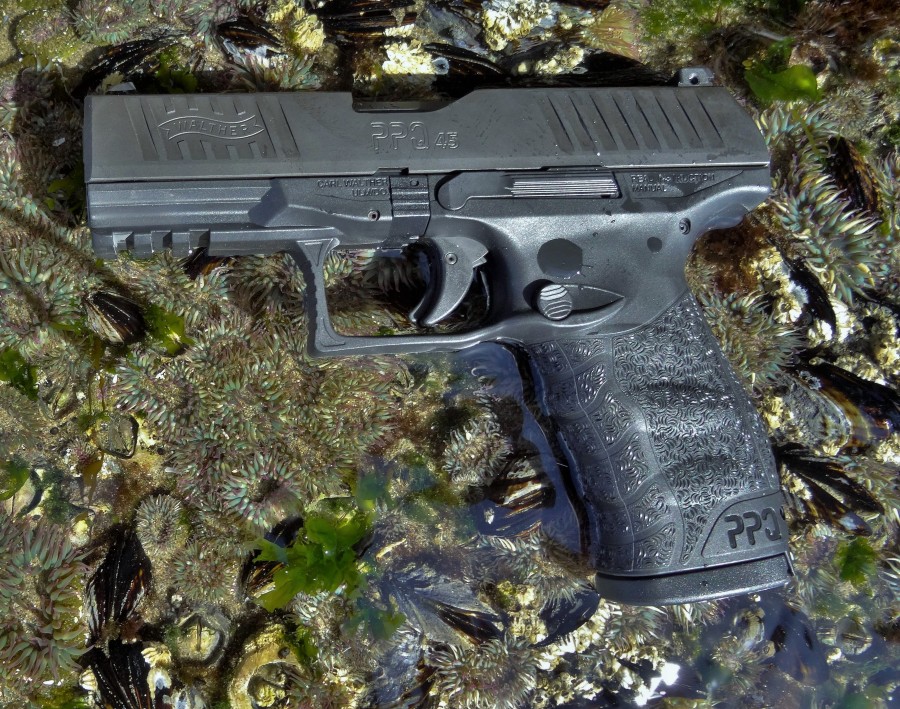 (The Walther PPQ .45 for this review was provided by the Kentucky Gun Company.)

If you only carry a .45 because they don’t make a .46, then Walther pistols have probably never been on your radar. It would be the ultimate understatement to say that the venerable German gun manufacturer Walther GmbH Sportwaffen has been slow to embrace John Browning’s greatest cartridge. But all that changed with the release of the PPQ 45. Simply stated, the PPQ 45 is an upsized version of the excellent PPQ. Question is, can you upsize a 9mm PPQ and still maintain its excellent handling characteristics and ergonomics? . . . 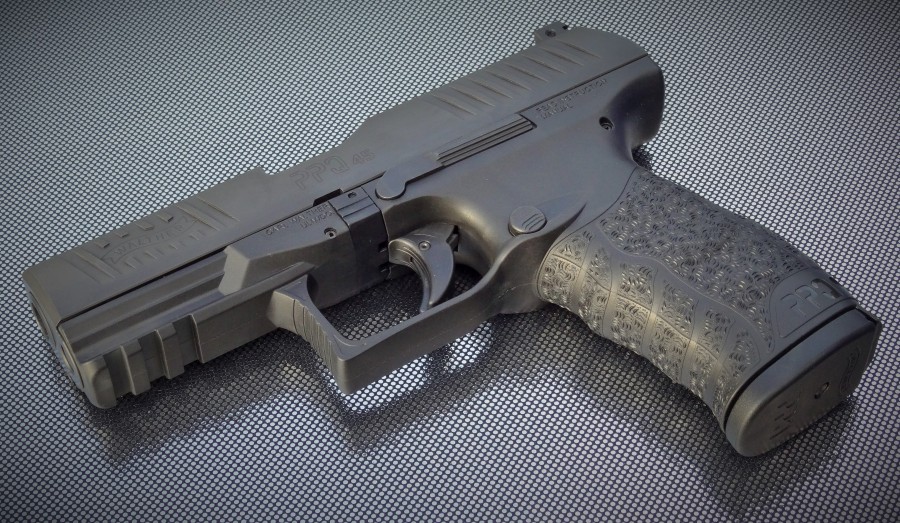 Walther released its Police Pistol Quick (“PPQ”) in 9mm in 2011. It was essentially an improvement on the GLOCK family of striker-fired pistols, featuring better ergonomics, a better trigger, and improved aesthetics. I really sung the praises of the 5-inch slide version of 9mm PPQ, and I stand by those assessments a year and another 3000 rounds later. So I was thrilled when I got the call from TTAG HQ asking me to put the new “big brother” of the 9mm PPQ through its paces.

As is standard industry practice, Walther tested the waters by first only introducing the PPQ in 9×19 and .40 S&W. Despite the fact that gun shops often place the PPQ on their second shelf, the PPQ has proven itself to be a top-shelf contender that blows the GLOCK away in virtually every category; except perhaps availability of accessories. Despite not being pushed hard by many dealers, the reception has – apparently – been good enough to cause Walther to step up and offer the PPQ in the uber-manly and uber-American .45 ACP chambering.

With a list of features a mile long, Walther has hit another home run, on paper anyway:

Oh, and did I mention it has a polygonal hammer-forged barrel?

Of course, what’s good on paper only tells half the story. I’ll conduct this review in two parts; for Part I, I have put 500 rounds downrange and give you my initial impressions as part of this article. I’ll follow this review up with a more a rigorous 6-month field evaluation after which I’ll be able to provide more data points and a more definitive conclusions. You can’t begin to talk about the PPQ 45 without talking about the trigger. The PPQ trigger features a light and fairly smooth take-up that hits an obvious wall after a ¼ inch or so. Then another 4.5 pounds of pressure and a 1/10 of an inch is all it takes to release the striker. The trigger resets in 1/10 of an inch with an audible click. Double taps are super quick due to this reset. The trigger is remarkably crisp and lacks any annoying bumps or stacks.

If I had to criticize the trigger at all, it’s only because it’s light. The factory lists the trigger weight at 5.6 lbs, but as noted above, our sample broke more than a pound lighter than advertised.

Now don’t get me wrong, I love the light trigger…for range work. Light triggers are great for accuracy, but not so great for safety – unless you train a lot. If you train with your pistol on a regular basis, this isn’t so much of an issue. But if you only go to range a couple of times a year (and hence may have rusty gun handling skills) a light trigger combined with no manual safety could be a problematic combo. Walther applies a tough Tenifer finish to the PPQ’s slide and barrel. Tenifer is a brand name of a type of salt bath ferritic nitrocarburizing, which is also known as liquid ferritic nitrocarburizing or liquid nitrocarburizing. Based on my experience with other pistols I’ve owned that were finished in Tenifer, it’s as tough and durable as any of the modern finishes out there – with the possible exception of whatever is on my HK USP-T. 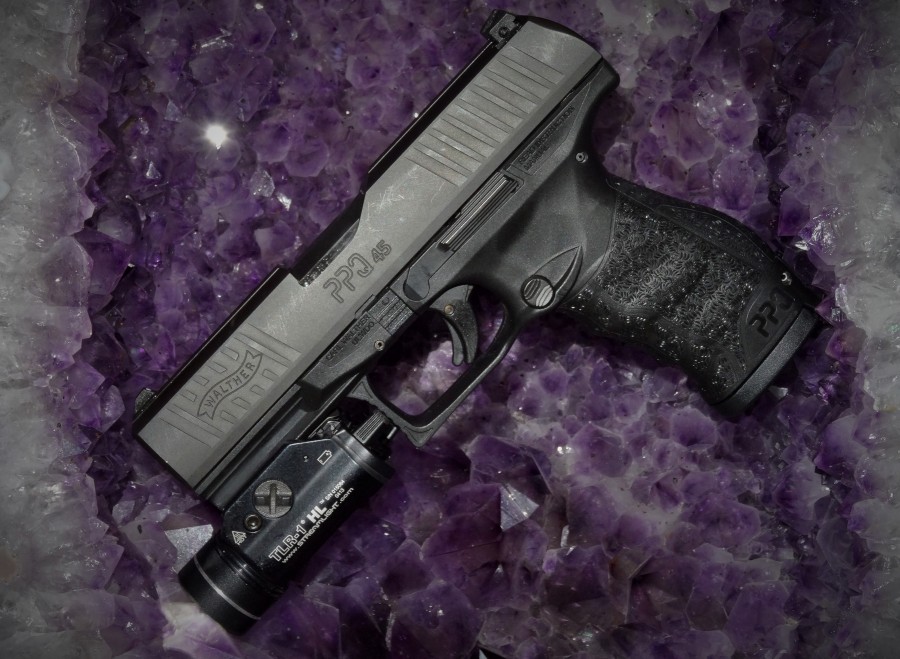 To test out the finish, I dunked the PPQ in the ocean surf and sand, then threw it in the melted ice water in the bottom of my Yeti cooler overnight, and then let it dry. The next day, there was some surface rust on the extractor and one of the roll pins, which came off easily with a brass brush. The Tenifer held up fairly well to this abuse, but there were some scratches from the sand and/or coral reef. These scratches were hard to capture on film, as they are only obvious when seen from certain angles. (See photo above). 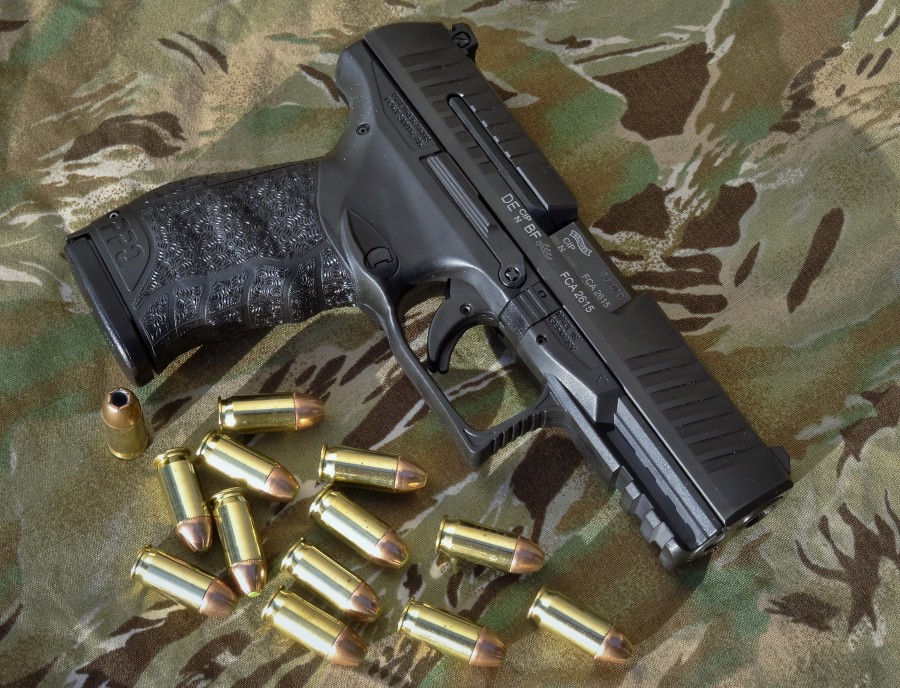 I really like the PPQ’s stock dual oversized slide stops because they are very comfortable to operate and easy to find (even for folks with small hands). With most 1911s, I have to break my grip in order to reach the slide stop, but with the Walther PPQ its right where I can get to it.

Another useful feature for southpaws is the magazine release. It’s a traditional American “button” style release, which is more popular here in the states than the European paddle style release located in the trigger guard. While not truly ambidextrous like the paddle design, the button style release is reversible: the operator can switch the button from the left side to the right in a matter of a minute or two. In reviewing the PPQ 5-inch slide 9mm, I noted that the PPQ may just be the finest example of Walther’s technology and research on the topic of ergonomics. Fortunately, the PPQ 45 continues in the tradition of the smaller pistol. The PPQ 45’s grip is slightly larger in girth, as the mag well is perhaps a millimeter or so wider (side to side) and longer (front to back). However, it’s remarkable how closely the PPQ 45 matches the feel of its smaller 9mm sibling.  Holding them side by side, you don’t feel much of a difference.

My understanding is that the PPQ 45 is supposed to ship with three backstraps, but my T&E sample shipped from Kentucky Gun Co. with only two. These can be swapped out in a matter of minutes by pushing out the small roll pin located on the bottom of the grip (see photo above). I did switch out the grips in the 9mm, and it was a relatively simple task if you have the right punch (not included).

Walther’s cross-directional textured tactical grip provides a good grip without being uncomfortable. Like many aspects of pistol design, this boils down to user preference. I’ve heard some complain that the PPQ’s grip texture isn’t aggressive enough, but I prefer it to the more aggressive texture of guns such as, say, the traditional Springfield XD style grips.  I recently had my Sig Sauer P229 modified to add the “E2 grips,” and I have to say I’m quite enamoured with the sandpaper-like feel of those grips.  But I’m not complaining about the texture of the Walther grips. 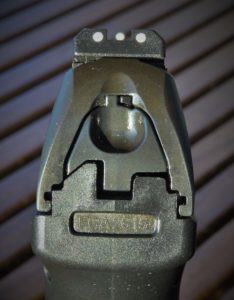 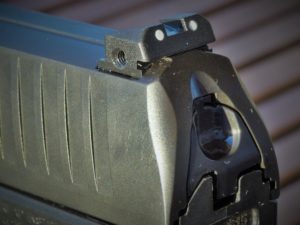 The sights on the PPQ 45 are a standard three-dot variety, and are made of polymer. The rear sight is adjustable for windage. These sights work well in daylight hours, and if this gun is used as a range toy or competition pistol, there is probably no need to change them out. Nonetheless, steel night sights are available, and I suspect I will upgrade these at some point in the future. 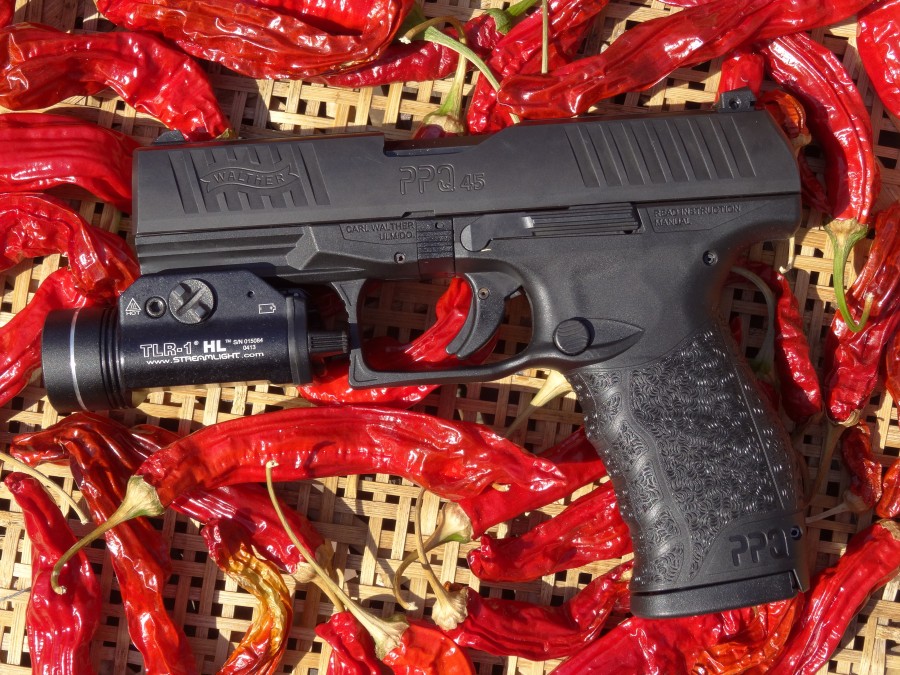 The PPQ 45 features the same type of integral picatinny rail as can be found on its smaller siblings. Rails are fairly standard these days, and folks either love them or hate them, so there isn’t much extra to say on this point. 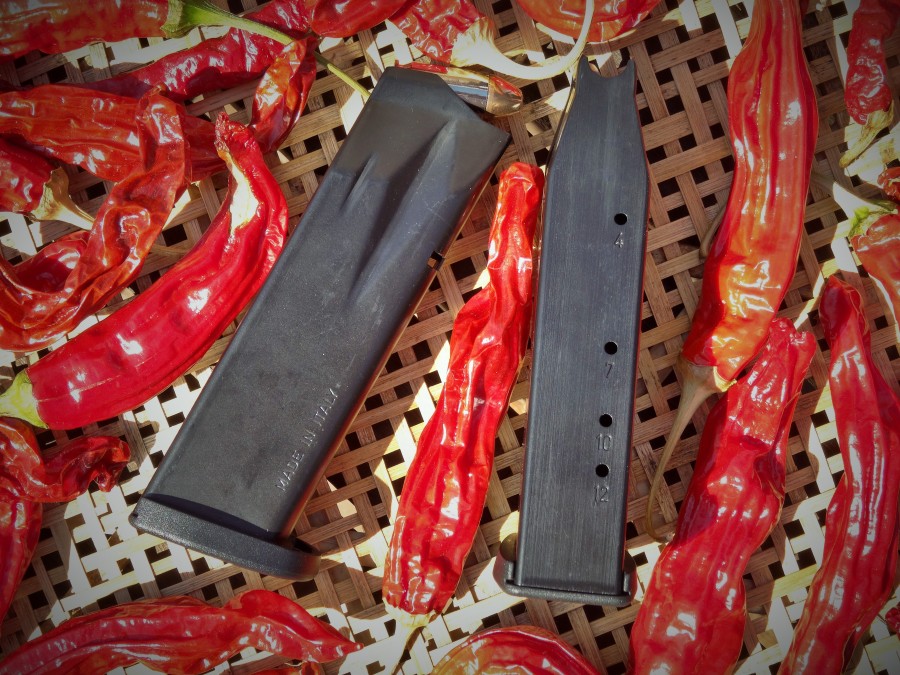 The pistol comes with two 12-round steel mags, which are manufactured for Walther by the Italian firm Mec-Gar. Mec-Gar is undoubtedly one of the top manufacturers of high-quality OEM pistol magazines, and its client list boasts the likes of Smith & Wesson, Beretta, Ruger, Steyr, SIG SAUER, Colt, CZ, etc. Replacement mags should run around $31-42, depending on where you buy. 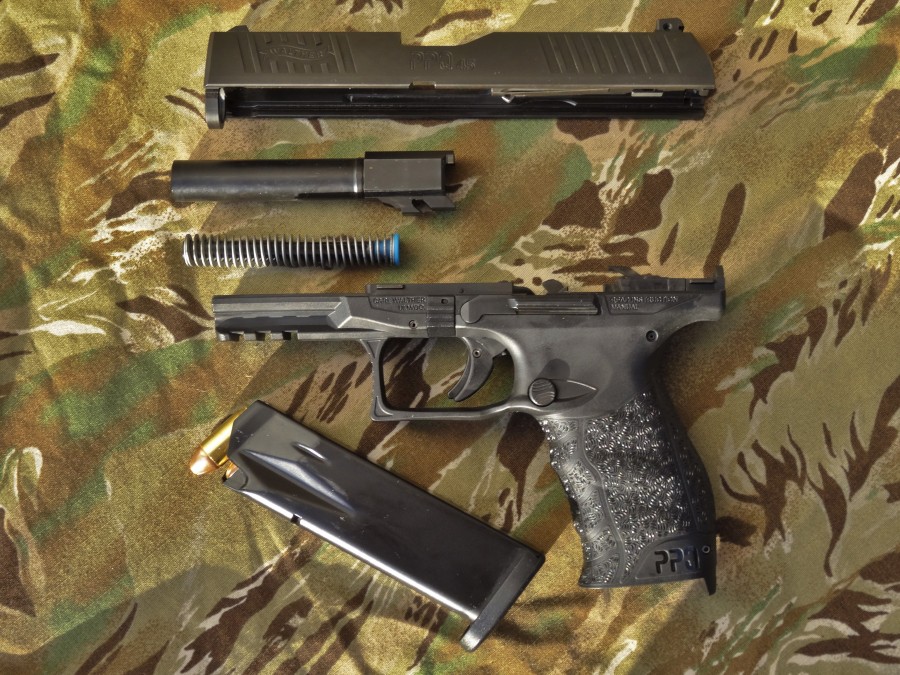 Disassembly is very GLOCK-like, only slightly more simple. Like a GLOCK, the striker must be in a de-cocked position, which requires that you pull the trigger on an empty chamber. After that, you simply pull down on the takedown catch and the slide can be removed. The takedown catch is much easier to manipulate than the two small levers found on a GLOCK.

The following photo shows the “guts” of the frame, for those who are curious: 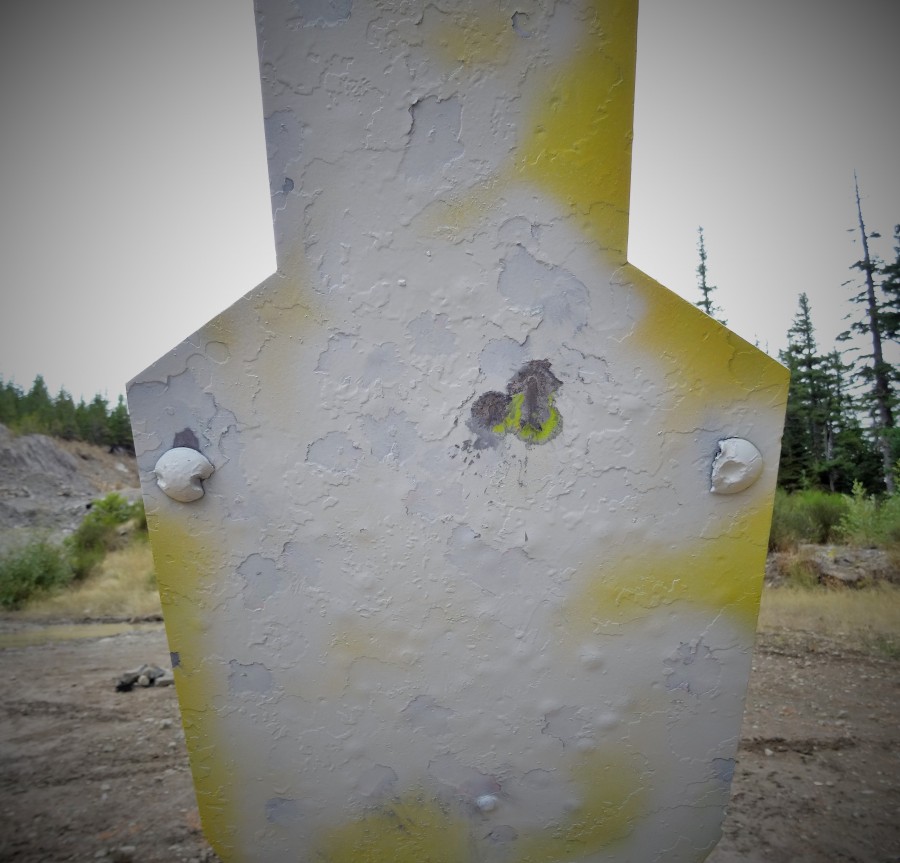 The group shown above is three shots fired with cheap Federal aluminum case ammo from 21 yards. the group measures .91 inches center to center.  Candidly, I’m glad I had a witness, because I’m not sure I could do it again on command.

While not all my groups were this good, I could fire the Walther PPQ 45 much more accurately and quickly than my HK USP T or a typical 1911. In fact, sub 2-inch groups at 20 yards were typical / expected, and I think the gun could do even better in more capable hands.  More importantly, however, this is the first .45 ACP with which I can achieve fast accurate double taps (split times in the .2 to .3 range). I think it’s the ergonomics and light trigger that sets this gun apart in the accuracy department, although I’m sure the Walther barrel helps as well. 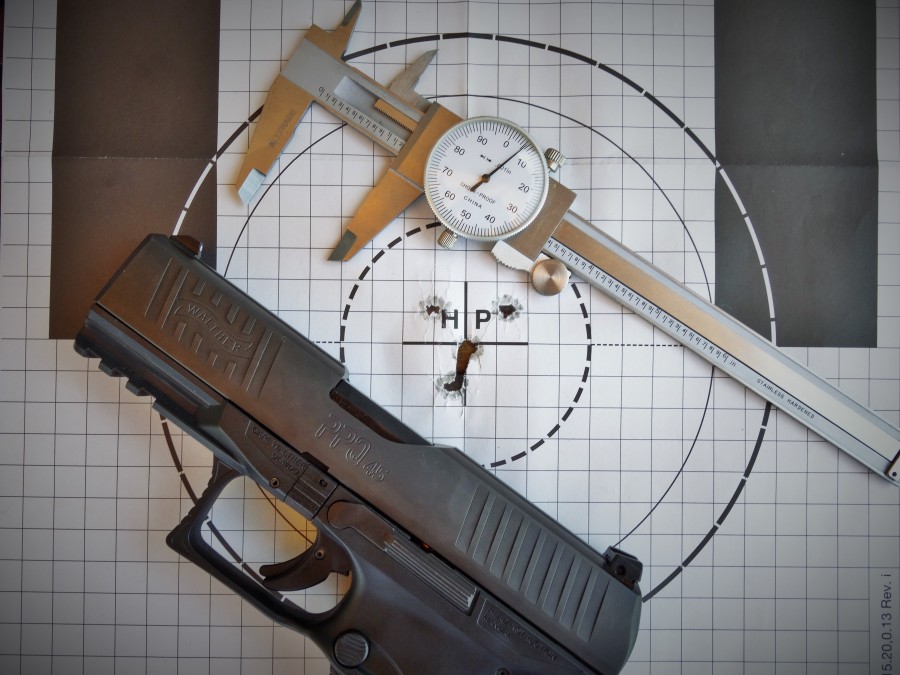 Walther provides a test target with each PPQ 45, showing four shots fired at fifteen meters (49.2 ft). The four-shot group measures 1.2 inches.  This type of accuracy is certainly consistent with my field evaluations to date. To test the reliability of the PPQ, I shot 500 rounds using 10 different loads. My selection of ammo including top shelf loads such as Remington Golden Saber, Hornady Critical Defense, Federal Hydra-Shok and SIG SAUER Elite Performance HPs. I also launched a number of different types of value-priced ammo, including Federal American Eagle brass cased, Federal red box aluminum cased, bulk pack UMC, and Wally World Winchester white box. The Walther PPQ ate everything I fed it, and even functioned well when totally wet. Like the PPQ 9mm, I have a very high degree of confidence in this pistol. The Walther PPQ 45 comes with a nice enough plastic case, and includes two magazines, a chamber flag, a small box containing the parts needed to reverse the mag release, and a lock. I believe the pistol is supposed to ship with a magazine loader, but my sample didn’t have one. 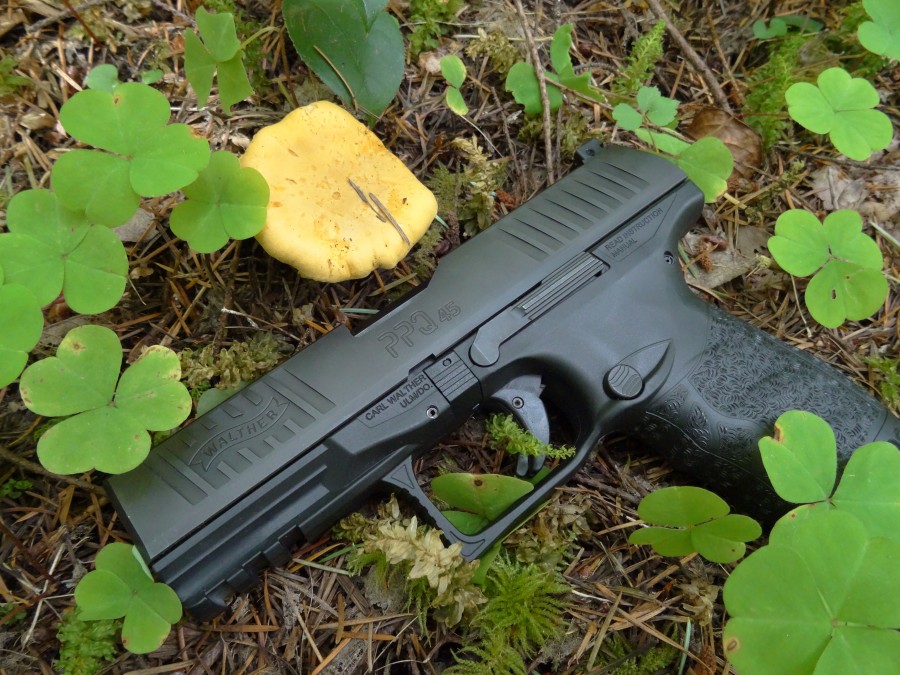 I’ll be the first to admit that I’m not really a “.45 guy.”  Primarily, this is because the ammo is expensive when compared to 9mm.  Moreover, high quality 1911s tend to be expensive. One of my clients gave me a HK USP-T in .45 ACP, but I don’t shoot it worth a damn. I have a Beretta 8045 Cougar that I really love to shoot, but it features the old Walther P-38 decocker design which I don’t like, and it only has an 8+1 capacity. Thus, this is the first mid-priced .45 ACP I have come across that I would carry on a daily basis. My first impressions are that Walther has hit another home run. Stay tuned to TTAG for an update next spring. Accuracy: * * * * *
Based on my initial shooting impressions, this pistol is top of its class.

Customization: * * *
Here is the one area where Walther doesn’t enjoy the same benefits of larger companies like GLOCK and Smith & Wesson. As of this writing, accessories and aftermarket parts are still a bit lacking for the 9mm version, when compared to some of the other brands. That means custom kydex holsters are your best bet…for now.

Overall Rating: * * * * *
Should be a GLOCK killer, but probably won’t be due to a lack of a push from gun dealers.

(The Walther PPQ .45 for this review was provided by the Kentucky Gun Company.)