I return with another entry in my never-ending quest to find quality, affordable, defensive handguns. My latest contender: The Tristar C-100, chambered in 9mm.

The C-100 is manufactured by Canik and imported into the U.S. by Tristar. Canik guns have made quite a splash in the U.S. handgun market in recent years because, bluntly, they are cheap. However, in this case “cheap” does not mean “crap,” it means affordable.

As in really affordable. The reason everyone has been talking about and buying various models of Canik handguns in the last few years is because they are a lot of gun for not a lot of coin. Case in point: A friend bought this barely used C-100 at his local gun store for all of $300. He was kind enough to let me borrow it, as I’ve been testing a range of CZ-75 clones lately. The C-100 is the spitting-image of the CZ-75 Compact model, made by CZ in Czechoslovakia. So how can Canik make a nearly identical CZ-75 Compact clone, and sell it for 40 percent less than the real deal? The answer, my friends, is pure politics. Canik pistols are made in a  NATO-approved plant in Turkey. Turkey is known for its skilled labor force and its modern manufacturing facilities (lots of other name brands have figured this out, putting their name on Turkish shotguns). 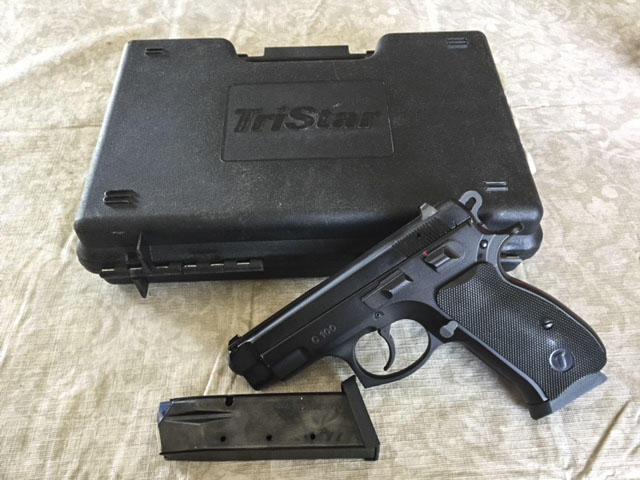 The C-100 comes with a lockable hard-plastic case and two 15-round magazines, along with a variety of accoutrements (manual, cleaning kit, lock, etc.). The magazines appear to be very high quality, and are of gloss-blue finish with blue plastic followers, black plastic base pads and witness holes. Just for essess & gees, I tried the C-100 with a couple of magazines for the Israeli-made Bul Cherokee pistols (also CZ-75 clones) I had for testing. While the BUL magazines were for full-size pistols and extended below the bottom of the C-100’s grip frame, the magazines functioned perfectly in the C-100 and locked the slide back when empty.

Like I said, the C-100 is a dead-ringer for the CZ-75 Compact. The slide is steel, but the frame is aluminum. That’s a good thing, as the C-100 is intended to be a defensive carry pistol, and all-steel pistols tend to get left at home because they are heavy.

Not that the C-100 is a flyweight; this is still an all-metal pistol. The C-100 is a double-action/single-action pistol with a thumb safety, not a de-cock lever. This allows for 1911-style cocked-and-locked, condition one carry.

If one so chooses to tote the C-100 in double-action mode, one must first chamber a round, then carefully lower the hammer by depressing the trigger and holding onto the hammer while carefully lowering it. That puts the C-100 and any true CZ-75 pattern pistol into DA/SA mode. The gun can now be carried hammer-down on a loaded chamber, for a double-action first shot followed by single-action follow-ups.

The C-100 comes with decent checkered black-plastic grips that look like the grips on the CZ. Sights are steel three-dot combat sights that also appear to be a perfect facsimile of the original.

The single-action trigger pull measured at just over five pounds, with a bit of creep before the shot broke. I couldn’t find a tool mark anywhere on the C-100, inside or out. The barrel locked up solidly with no play when I pushed down on the barrel hood, and the rifling looked perfect. According to Tristar Arm’s website, all C-100s have a Cerakote finish which is tough and resists wear.

Size-wise, the C-100 is very similar to the GLOCK 19 which is obviously the market competitor Canik/Tristar is challenging here. The C-100 is a touch heavier, with its metal frame, but barrel length, grip length (approximately), and magazine capacity are all the same as the G19.

Heck, the C-100 even fit in my leather GLOCK 19 holster (well, sort of…it was a bit loose) in a pinch. Good friend and custom leather holster maker extraordinaire E.J. Redding provided an OWB pancake holster he’d built for a CZ-P01, which fit the C-100 perfectly. 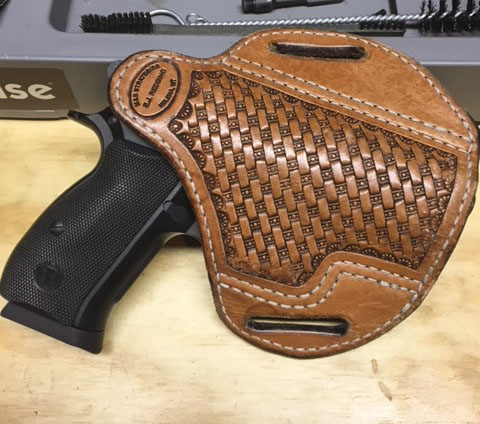 So How’d it Shoot?

Pretty well for a “cheap,” semi-compact defensive 9mm pistol. It didn’t wow me, but it didn’t disappoint me either.

All loads were fired by me from a sandbag, at 25 yards. A sixth round was loaded in the magazine to ensure consistent pressure on the bottom of the chamber throughout all shots (if you believe in such things). The results: From best to worst: Just for scale, that’s my size 11 hiking boot. For the OCD crowd, this is a 12-inch group. I’d post the picture with the tape measure, but it would just make me angry.

I have a thing for semi-compact defensive handguns, and compact CZ-75s are as sexy to me as tall redheads. I’ve lusted after a CZ-75 Compact with its traditional operating setup (thumb safety without a de-cocker) for a long time, but just could never justify the price tag. Plus, could it really do anything that my G19 doesn’t?

But for $300, the C-100 is a real contender against the mighty G19. The girth of the grip frame is a little much for those of us with short, fat fingers, especially when trying to fire the gun double action. In single action (which is how I would carry it and any CZ-75), this problem is alleviated.

It’s still bigger in your hand than holding a single stack 1911, but all double stack, high-capacity pistols are. If the C-100 was mine and I was carrying it every day, I’d invest in a set of thin grips. If you have large paws like its owner does, that won’t be an issue.

The C-100 certainly no target pistol, but target handguns cost money. You aren’t going to find one for $300 and you probably won’t carry it every day either.

The C-100 is an affordable defensive pistol. It shot a couple of loads well enough, certainly passable for personal defensive use. It also showed a few flashes of brilliance that were wrecked by fliers.

One thing I do appreciate: The C-100 shot directly to point-of-aim. The sights were dead-on and didn’t have to be moved. This may seem a minor point, but it is not always the case, even with more expensive handguns. This is a good reminder that you should put at least a couple of hundred rounds through any new concealed carry gun before you rely on it for self-defense. You need to know what ammo it likes and ensure that the sights are aligned.

The trigger was decent, and I say this as a confirmed trigger snob. It’s no match 1911 or single action S&W revolver trigger, but it’s more than workable.

I would have preferred a bit lighter pull, there’s very little creep in the single-action pull, and it broke cleanly. For a $300 Turkish clone, it’s well worth the price of admission. I’m a fan of the C-100. It doesn’t do anything that my GLOCK 19 doesn’t, but it costs about $200 less. The C-100 was completely reliable, as neither the owner nor I have experienced a malfunction in hundreds of rounds. As affordable handguns go, this one may take the prize for “best buy.”

Accuracy: * * *
Acceptable accuracy from a semi-compact defensive pistol, particularly given its price point. For what this thing cost, it shot much more accurately than I was expecting. It’s no target pistol

Ergonomics: * * * *
CZ-75s are very comfortable to my hands. While it’s on the girthy side, all the controls are all right where I want them, and single-action trigger is easy for my short, fat fingers to reach.

Trigger: * * *
At over five pounds single, this is no target trigger. But forgivable in a $300 pistol, there’s very little trigger creep before a fairly crisp break, followed by a good audible and tactile reset.

Customize this: * * * *
No rail = no lights/lasers/bayonet/chainsaw attachments for the dust cover. I know Crimson Trace makes laser grips that will fit. Sights appear to be as replaceable as the CZ-75 Compact. Lots of aftermarket grips out there, too. Holsters aren’t exactly plentiful, but they aren’t unheard of.

Overall: * * * *
For a street price of $350 or so, you get a proven, reliable design that’s more than accurate enough for its intended purpose.