Aside from the M&P Shield, I’ve never been a fan of M&P pistols. I was continually surprised to see knowledgeable shooters compete with M&P’s — but not surprised that they’d changed the grip, sights, trigger and barrel. And then I shot the new full-sized Smith & Wesson M&P9 M2.0 featured in RF’s review. For all intents and purposes it’s a different gun. A better gun. Is the Smith & Wesson M&P9 2.0 Compact as good?

The M2.0 Compact isn’t another GLOCK “generation” with little more than cosmetic changes (OMG Becky front serrations!). While Smith gave their GLOCK 19-sized M&P an aesthetic upgrade, they addressed all the major ergonomic and functional “issues” that hamstrung their handgun. First and foremost: the grip. A lot of people complain about the GLOCK’s shooting angle; its “unnatural” point-of-aim. But you can train yourself to acclimatize to its “quirks.” What the naysayers neglect to mention: the shape and texture of the GLOCK’s handle. How a handgun feels in your hand, how secure it is, has an enormous impact on your speed and accuracy.

The new Smith & Wesson M&P9 M2.0 Compact’s handle is perfectly comfortable and extremely grippy. It helps make the Compact a true hand-gun (singular). Thanks to the pistol’s geometry — low bore axis and all — and the grip’s simple shape and texture, you can get a rock-solid hold in single-handed fast-as-you-can-pull-the-trigger fire.

Comparing the Smith & Wesson M&P9 M2.0 Compact head-to-head with the GLOCK Gen 5 G19 — as everyone will — the Smith’s superior ergonomics are never in doubt. In fact, I can’t think of any current striker-fired pistol with such a great human-to-firearm interface. [Unlike the full-size version RF reviewed, our T&E gun had no external safety. I’d prefer one. If you do too, Smith makes ’em.]

Bonus! The M&P9 M2.0 Compact’s slide is easy to manipulate on the frame — which was a little surprising considering the gun’s minimal recoil. Again, a bit of mass on top of great geometry carries the day.

The Compact’s sights are bright white traditional 3-dot style, well suited for a tactical pistol. This rear sight on this version has a slight vertical angle on the rear sight, but it’s fairly smooth and doesn’t catch on a pocket or my belt for one-handed slide manipulation. As of this writing, S&W doesn’t offer a tritium night sight for the M2.0 Compact, as they do for the M2.0 Shield. I hope they add that option and fit a much more vertical notch on the rear slide, instead of the Shield’s ramp-style rear sight. One of the few places without improvement: the Compact’s magazine well. There’s no flaring, enlarging or funneling. Reloading problems are a thing; any miss and the magazine will catch on one of the handle’s angles, slowing you down. A slightly flared and funneled mag well wouldn’t have created any additional bulk, and would’ve helped blind magazine insertion. It took them a few decades, but even GLOCK learned to funnel and flare their magazine well (that’s the G19 Gen 5 on the bottom in the photo above). For everyday carry, the Compact’s dimensions are much more friendly than the full-size version. That’s from a guy who thinks the GLOCK 19 is the perfect size pistol. If you like the G19’s dimensions, you can keep the G19’s dimensions. As you can see above, the M2.0 Compact and the G19 Gen 5 are virtually identical in size.

The S&W Compact’s fairly narrow frame conceals easily while providing enough sight radius and hand purchase for fast, accurate fire. I ran the Bill Wilson 5X5 test quite a few times with the M2.0 Compact. I’ve never quite broken 20 seconds with a gun I’ve never shot before, but I consistently got close with the Smith. A lot of that has to do with the Compact’s new trigger.

Lest we forget, the original M&P’s trigger was widely regarded as the worst of any in a modern striker-fired pistol. So the M2.0’s “vastly improved” trigger arrived with low expectations. Talk about a reversal of fortune; the M2.0’s trigger sets a new standard, only equaled by the Walther PPQ. The M&P9 M2.0 Compact’s trigger breaks at a little over five pounds, with a smooth pull and very little grit or stack. Like the full-size version, the new trigger is both a huge improvement and something of a disappointment. The trigger shoe is the issue. It’s simply too tightly curved and doesn’t allow comfortable finger placement. Nor does it give you many options on where you put your finger.

Because of the fairly small grip and my not small hands, I had to pull my trigger finger out of the trigger well to get any kind of consistent trigger pull. That left most of my finger outside the well, with only the last half of the tip of my trigger finger on the actual shoe. The pistol ships with no fewer than four backstraps. Swapping the standard backstrap for the largest one helped a bit. But a less extreme curvature of the trigger would have helped a lot. If this were my only gun, as much as I appreciate the Compact’s new go pedal, I’d still fit the pistol with an aftermarket trigger. But I shoot a lot of different guns, so I can’t train on a single platform. If this was my EDC, and especially if it was my duty gun, I’d leave the factory trigger alone and let consistent training do its job. Bottom line: unlike the original M&P, an aftermarket trigger on the M2.0 is a nice-to-have, not a have-to-have. As usual, after an initial lube of the gun, I never cleaned, lubed or disassembled the Smith & Wesson M&P9 M2.0 Compact. I shot over 500 rounds including IMI Di-Cut cartridges, FMJs and hollow points from various brands, in grains from 115 to 147. There were no problems of any kind at any time. Magazines always inserted securely and dropped with authority. I had no issues returning to battery with any round regardless of my grip. Like the GLOCK 19 and the SIG SAUER P229, I just have to accept the fact that my thumb inadvertently presses the Smith & Wesson M&P9 M2.0’s slide release, causing intermittent failures of the slide-to-lock back on an empty magazine. I can live with that. Disassembly remains as simple as it can be, but Suzie Safeties note: you will have to pull the trigger to get the slide to release from the frame. As always, make sure the gun is completely unloaded prior to attempting to disassemble the firearm. 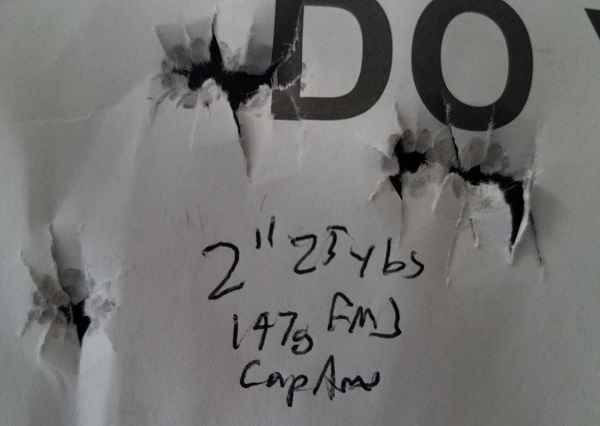 After my trigger time with the full-sized Smith & Wesson M&P9 M2.0, I was looking forward to shooting the Compact version, mostly because I liked the full-sized M2.0, but I’m not really looking for a gun that can double as a diving board. I wasn’t surprised with how well its smaller sibling handled recoil. The Compact is a fast, flat-shooting gun that barely moves in my hand.

I was expecting the M2.0 Compact to replicate the full-size M2.0’s distaste for heavier grain bullets, but the Cap Arms 147 grain FMJ was my best scoring round, averaging a 2″ group. This is a particularly soft-shooting round, an oddity amongst the heavier grained 9mms. What this pistol didn’t like: any of the other 147gr rounds or 124gr+P rounds I put through it, all of which shot closer to the 3-inch mark. 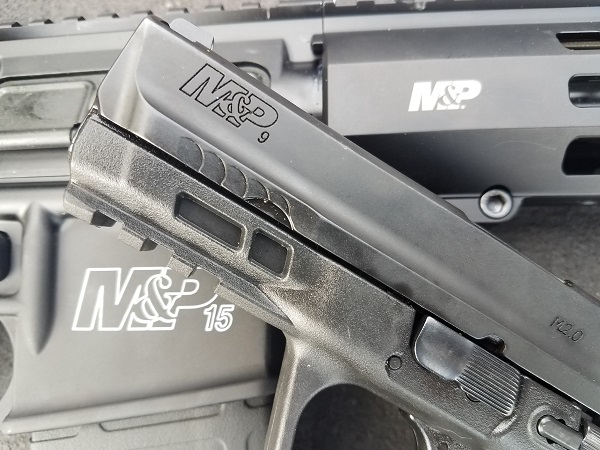 Smith & Wesson have created (recreated?) an American-designed, American-made gun that competes with anything in its class. This is a great firearm that would be a good value at a higher price. I don’t know if large police departments who’ve bought GLOCKs and SIGs for decades would make the switch to Smith, but they’d be fools not to consider it. As would you.

Style and Appearance * * * *
I don’t particularly dig the look of any of the modern polymer pistols, but this one at least has some style to it, with matching slide cuts front and back.

Customization * * * * *
Backwards compatible with the aftermarket options available on the original, and multiple palm swells as well as magazine base plates are included. There’s not much you can’t do to this gun.

Accuracy * * * *
It didn’t drop below the 2-inch mark, but it hovered right there. For five-round groups at 25 yards with a couple of different weights and a wide range of brands, that’s good performance in a firearm of this size.

Overall * * * *
This is a great value on an American-made pistol. I’d carry it any day and be very confident in it’s performance. Smith & Wesson paid attention, and stepped up big time. The lack of renewed attention to the magazine well, no factory option for night sights (yet) and a less-than-perfect trigger geometry keep this gun out of the five star category.