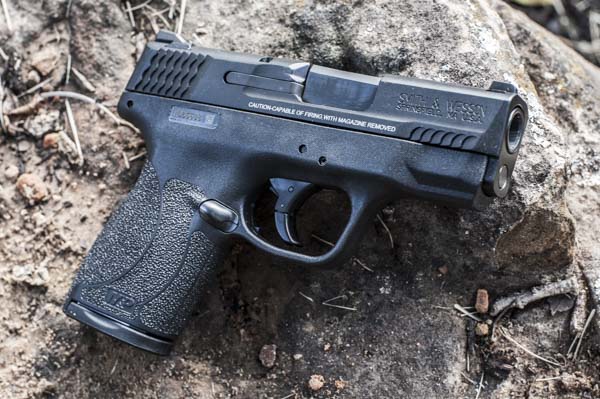 The first thing I noticed about the Smith & Wesson M&P 45 SHIELD: its width. For a .45ACP pistol, it is exceptionally slim. The thickest portion of the gun — at the slide lock — is only 1.05″ wide. So I slipped it into a quickly made IWB leather holster and went about my day. Not only was it comfortable, but it disappeared in an un-tucked fitted T-Shirt. It even ankle carries well. At the four o’clock position, IWB, no one could tell I was armed. I tried all sorts of normal workday poses to see if it would print. At some point, I realized that the awkward poses my friends were asking me to try were no longer for posterity, and the question of true discrete carry was answered. This is a comfortable, easily concealable, reliable .45ACP handgun.

To keep the gun as slim as possible, all of the Smith & Wesson M&P 45 SHIELD’s controls are small and tucked in close. There’s always a debate on whether it’s a slide lock or a slide release, but on this gun, there’s no debate. You won’t release the lever just using your thumb, at least not quickly and reliably. It’s too small, and too snugly mounted against the frame. The slingshot technique is the only reliable reloading technique to get the M&P 45 SHIELD back into battery quickly. The external safety, even though it’s quite small, has no trouble at all disengaging. It manipulates easily, mostly because of the serrations that cover it’s surface, but also because of its position.

Just during my firing, I engaged and disengaged the safety 63 times. Plus a whole bunch just trying it out. Swiping my thumb down to grip, I missed the safety exactly zero times. You can also get this particular gun without the safety, but I like it. 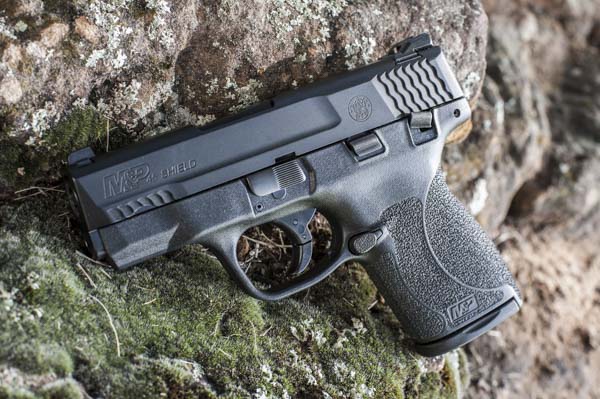 All of the controls are on the left side on the 45 SHIELD, none on the right. The mag well isn’t beveled in any way. So although the magazines are easy to load and drop freely, the design leaves you with little room for error. Train, train, train.

My first big surprise: the M&P 45 SHIELD’s overall light recoil. The handgun weighs in a couple of ounces lighter than the similar capacity, similarly sized, GLOCK 36. And yet the Smith delivers a fairly soft recoil pulse. Considering how light and thin this gun was, I was expecting a much more punishing experience.

The first time I had seen this gun fired was at the range with a US army armorer, a vet about 80-years-old. He’d just bought the M&P 45 SHIELD for his everyday carry pistol. Normally, I wouldn’t recommended a small gun in a large caliber for such a chronologically advanced man. But I was impressed when he ran through both magazines, pounding the steel at 25 yards in fast fire like it was nothing. I chalked it up to “old man strength” (which is real, BTW). The next magazine out was mine. I was pleased to find that the 45 SHIELD fired like a much heavier pistol. I put all of the reliability rounds out the first day; some 440 rounds. Although my hands were a little chafed from the grips, I didn’t feel worn out from the gun. It was easy to keep the front sight down, even in fast fire with the flush magazine.

Surely some of that recoil mitigation is down to the gun’s grip. After all, the gun weighs relatively little and has a fairly high bore axis, with the middle of the bore an inch above thumb. The grip angle is very much a natural pointer for me, and the mediocre sights came right up in line with my eyes every time. But whoever came up with the fine dot texture stippling absolutely nailed it. Even on a humid 90-degree-plus day, the M&P 45 SHIELD’s grip went absolutely nowhere in my hand. What I don’t like, and what I was so close to liking: the trigger. The M&P 45 SHIELD has a two-piece hinged set up. Like similar triggers from other gun makers, I’m assuming it’s designed for safety. But it gave me problems during slow fire. If I focused on pulling the trigger straight back, the weight of the trigger drastically increased. In fact, it increased almost to infinity; it wasn’t going anywhere until my finger pulled hard enough to start sliding down the trigger, engaging that hinge in the two-piece trigger design. The result is a halting, two-part break that causes the muzzle to jump and the round to end eight to 12 inches off the mark at 25 yards.

That said, while this was my experience many others have praised the 45 SHIELD’s trigger. It’s certainly better than its standard M&P big brothers (a low bar). And it features a short reset that’s great during rapid fire. Given the groups that I eventually shot with the gun, I was able to train myself around the trigger. And if, like me, you’re in the minority who isn’t a fan, Apex tactical makes a great replacement trigger for the SHIELD line. In short, your mileage may very well vary. The sights are OK. There are a few different options on this gun, and I would highly recommend night sights for any EDC pistol, especially a back-up gun. Unfortunately, that option doesn’t exist on the Smith website. It’s out there for the 9mm and the .40SW, but not the .45ACP. Yet.

The big disappointment: the M&P 45 SHIELD’s rear sight, which has a smoothed front ramp. Considering the intended application for the gun, that’s a misstep. This should have been a hooked (Heine-style) or just a flat vertical surface that would allow the user to rack the gun by hooking it on a belt, pocket or whatever.

There’s also a good amount of space between both sides of the front sight while looking through the rear site. I appreciate that on a gun like this, but accuracy does suffer, as you can see on the horizontal spread of my rounds in the accuracy testing. Aftermarket sights are available. Accuracy was very good — once I took account of the trigger. In slow fire at the 25 yard line, off a bag, I was able to score 3” five round groups with a variety of a ammunition with boring consistency. Hornady’s 200gr XTP round gave me a few 2 ¾” groups, but everything I fired was within a quarter of an inch, one way or another, of the 3” mark.

Shooting standing at 50 yards, I easily hit a half-size silhouette with any ammunition I tried.  To put that into context, that’s much better than the stock M&P .40SW and just as good as the M&P C.O.R.E. Performance Center .40 cal I tested last year. Not bad at all for a slimline auto with a just over 3” barrel. Another big plus for the 45 SHIELD: reliability. I put 440 rounds through for testing in one day, and then another 60 for accuracy testing the next. I shot Blazer and Winchester 230gr FMJs, Hornady’s 200grain XTPs, Remington Golden Saber 185gr HPs and CAP Arms 230 grain XTPs. Zero failures to feed or to eject. I had one failure to lock back on an empty magazine at number 440. That’s it. As with all of my tests, I lubed the gun when I started, and never cleaned it or disassembled it again until after the test was complete. Field stripping and cleaning is window-licker simple. Unload, lock the slide back, slide the take-down lever down, let the slide go forward, pull the trigger, and keep pulling the slide right off. A barrel and a spring and you’re done.

I’m far more impressed with the M&P 45 SHIELD than I am with other M&P pistols. Especially at the price point, it’s a great EDC or backup gun. I’m not a fan of the trigger, but everything else is far better than I would have thought. The recoil profile on such a thin, light gun in .45ACP makes the M&P 45 SHIELD a solid choice for personal self-defense.

Accuracy * * * *
Master the trigger and this gun is the bees knees.  Three-inch groups or slightly better from a striker-fired EDC compact with a 3.3” barrel is great by any standard.

Reliability * * * * ½
It had one failure to lock back on an empty magazine in 500 rounds, so I had to take something off. Take that for what you will.

Customization * * *
No idea why Smith doesn’t have night sights on their website yet, but you can find them, as well as quality trigger upgrades online.  Sights and trigger upgrades are the basics, and are all I would want to touch on this gun. Not much for the southpaws out there.

Comfort and Conceal-ability * * * * *
As long as you’re a righty, this gun hides well, is easy to manipulate, and carries all day long in comfort.