There are an awful lot of very good choices these days in sub-compact and micro-compact pistols. We’re living in a golden age of concealed carry options designed to appeal to the millions of Americans who now have concealed carry permits or live in constitutional carry states.

The fact is, not everyone can or wants to spend $300 or more on a concealed carry gun. And thanks to companies like SCCY (pronounced ‘sky’) they don’t have to. The question is, can those looking for an affordable personal defense gun find something that’s reliable? Another issue is not everyone wants to carry a 9mm pistol. Recoil sensitivity can be an issue for some, as can hand strength. Racking the slide on a small 9mm handgun can be a chore if your grip is weaker than most.

And while some have derided the effectiveness of .380 ammunition, improvements in self-defense loads in recent years mean carrying a personal defense pistol chambered in .380 ACP (AKA 9mm short) is a very viable option.

SCCY makes ultra-affordable have developed a following. They’re small, affordable options with decent capacity. You can read Nick’s review of the SCCY CPX-2 9mm pistol here. he found it an inexpensive, reliable option for personal defense.

After producing two popular 9mm options, SCCY came out with the CPX-3 a doppleganger of their Parabellum guns, but chambered in .380. Now, in a logical evolution, SCCY’s new CPX-4 adds ambidextrous manual safeties to the safety-less SCCY CPX-3. 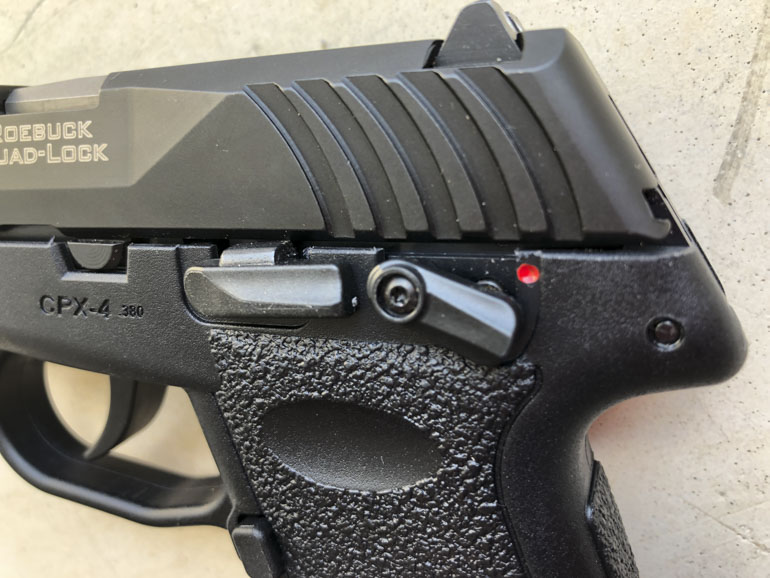 The CPX-4 is a polymer-framed double action only semi-automatic pistol. It comes packed with three 10-round double stack magazines, two with flush-fit baseplates and one with a pinky extension. The SCCY CPX-4 ships with three 10-round capacity magazines, two with flat bases and one with a pinky extension. (Dan Z for TTAG)

The CPX-4 also ships with a trigger lock and two keys. The SCCY CPX-4 has ambidextrous frame mounted manual safety levers. Its deep rear slide serrations make for a sure grip when racking the slide. (Dan Z. for TTAG)

Again, the only difference between the CPX-3 and the new CPX-4 is the addition of a frame safety. The double-action SCCY CPX-3 relied on a long, relatively heavy trigger pull to prevent accidental discharges.

But that’s not enough for many concealed carriers who simply don’t feel comfortable packing a pistol that doesn’t have a manually-actuated safety. Hence the CPX-4’s ambidextrous manual safety levers. The CPX-4’s trigger guard has a slight undercut for a higher grip. Ergonomic finger grooves provide a good grip on the gun. (Dan Z. for TTAG)

As for the trigger, it’s virtually the same as the one on the CPX-3. It’s a looong, relatively heavy, consistent 9 pound trigger pull, though it’s notably smooth. As with most double-action triggers, you’ll have to let the trigger all the way out to reset it for a second shot. The CPX-4 has a slight undercut in the trigger guard and molded texturing in the grip. That texturing could be more aggressive. While sufficient if your hand is dry, if it’s sweaty or otherwise wet, the grip can feel slick. 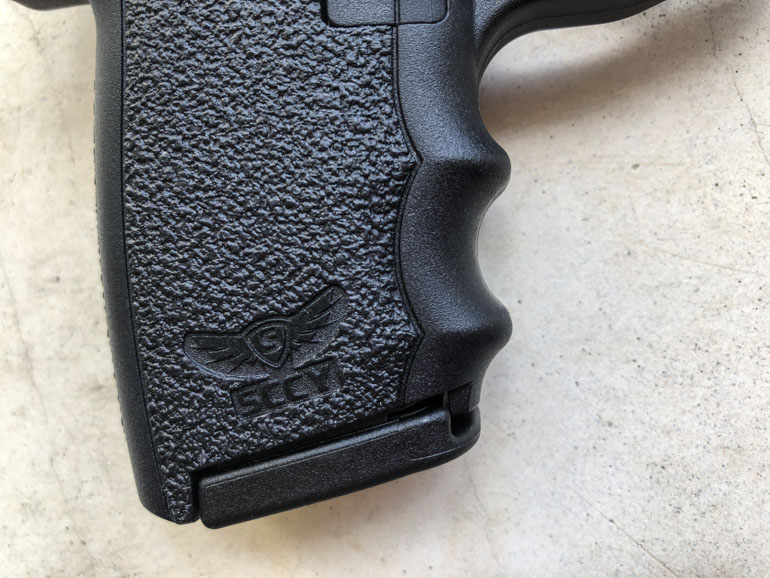 The SCCY CPX-4 comes with two flush fit magazines and one with a polymer extension for your pinky. (Dan Z. for TTAG) The .380 ACP CPX-4 is an internal hammer-fired double action only semi-automatic pistol. It’s polymer grip is built on an aluminum alloy receiver. The barrel and receiver are machined from bar stock. (Dan Z. for TTAG)

SCCY offers the CPX-4 with two slide options; either a black Nitride finish like our review gun or a natural stainless steel finish. The CPX-3 .380 is offered in a variety of grip colors that aren’t black, but not so with the new CPX-4. At least not yet. The CPX-4 has standard 3-dot sight system. The front sight is fixed and the rear is dovetailed for windage adjustment. Ease of disassembly is good, though you’ll need an empty case or tool to pull the takedown pin. (Dan Z for TTAG)

While takedown is simple, you’ll need to use an empty case or other tool to pry the takedown pin out. Reassembly couldn’t be easier.

The CPX-4 features what SCCY calls a Roebuck Quad Lock system. They bill it as a way to fix the barrel to the slide by bracing it at four points when the pistol is in battery, effectively forming one solid piece. The idea is to minimize any slop or play, improving accuracy. In practice, it’s hard to see the effect of this feature. It may well do exactly what SCCY claims. But in a pistol as small as the CPX-4 with a combination of a short sight radius (barrel length is a fraction under three inches) and a long, heavy trigger pull, the CPX-4’s accuracy is comparable to other subcompact .380 pistols. We fed the gun a variety of range and personal defense loads from Armscor, Winchester, Remington and American Eagle, among others. Of the more than 750 rounds we fed the gun, we experienced only one failure to go fully back into battery. That appeared to be the fault of a bad round.

We’ve read about SCCY pistols not performing well with come brands of ammo. We didn’t find one in the brands we tested, though you should thoroughly test any concealed carry gun with the personal defense ammunition you intend to use. We’ve seen more expensive guns than the CPX-4 balk at certain rounds while being perfectly reliable with others.

As for group size, I was able to get consistent 2.75 to 3-inch groups at 15 feet. That’s more than accurate enough for the CPX-4’s self defense intended use. With its easy-shooting, ease of operation, and 10+1 round capacity, the CPX-4 gives anyone looking for a .380 ACP CCW pistol with a frame safety a good option to consider.

Fit and Finish: * * * *
Like their earlier pistols, SCCY makes a gun with better build quality than you’d expect in a handgun in this price range. Metal parts are nicely finished and there were no sharp molding edges on the zytel polymer parts.

Ergonomics: * * * *
With a .380 auto pistol’s lighter recoil spring, the CPX-4 is easy to rack and comfortable to shoot. The molded grip texture could be grippier. While it’s comfortable in the hand, it can get slick when wet.

Accuracy: * * *
Accurate enough for its intended use. It produces very reasonable group sizes at personal defense range, which is what the CPX-4 is designed for.

Concealability: * * * *
It’s small and light enough. The CPX-4 is a tad on the wide side (compared to similar .380 concealed carry pistols), but not enough to be a problem.

Customize This: * * *
There’s no accessory rail for a light or laser, but there’s at least one aftermarket laser available I’ve found. The rear sight is dovetailed and there are some aftermarket options out there, too.

Overall: * * * *
The CPX-4 is an incredible value in an easy-to-shoot concealed carry pistol. If you’re someone for whom racking a 9mm concealed carry gun might be a problem, the CPX-4’s easier-racking slide may be just what you’re looking for. And if you feel better carrying a pistol with a manual safety, the SCCY CPX-4 will put your mind at ease.