The largest growth segment in the already hot firearms market is in concealed carry handguns and sub-compacts. A carry pistol is frequently the number one purchase for new gun owners: a handgun that can be used for home defense as well as concealed carry. And while buying a good gun is foremost in their minds, plenty of buyers with price constraints are happy to go with a relatively lesser-known brand if the price is right. That’s exactly the market segment the SCCY CPX-2 9mm handgun has staked out.

SCCY (originally Skyy, not to be confused with the vodka) has only been producing firearms in the state of Florida since 2003. But they can be found at stores nationwide and just about every gun show these days. Their raison d’etre is producing handguns that are big on quality at a low price, and they seem to have hit that mark with their flagship pistol, the CPX-2 9mm. For that $250 you get a polymer frame semi-auto handgun with a 3.1 inch barrel in 9mm that sports a “double action only” trigger with a full-length bar stock chassis embedded under the skin. It accepts double stack 10-round magazines with either flush-fit bases or finger extensions that give you a little more pinky room. And the CPX-2 comes with two mags as well as replacement bases for both.

The original CPX model (CPX-1 for those keeping score at home) included a manual safety on the frame, but it drew so much criticism that SCCY dropped it altogether in the newer model. 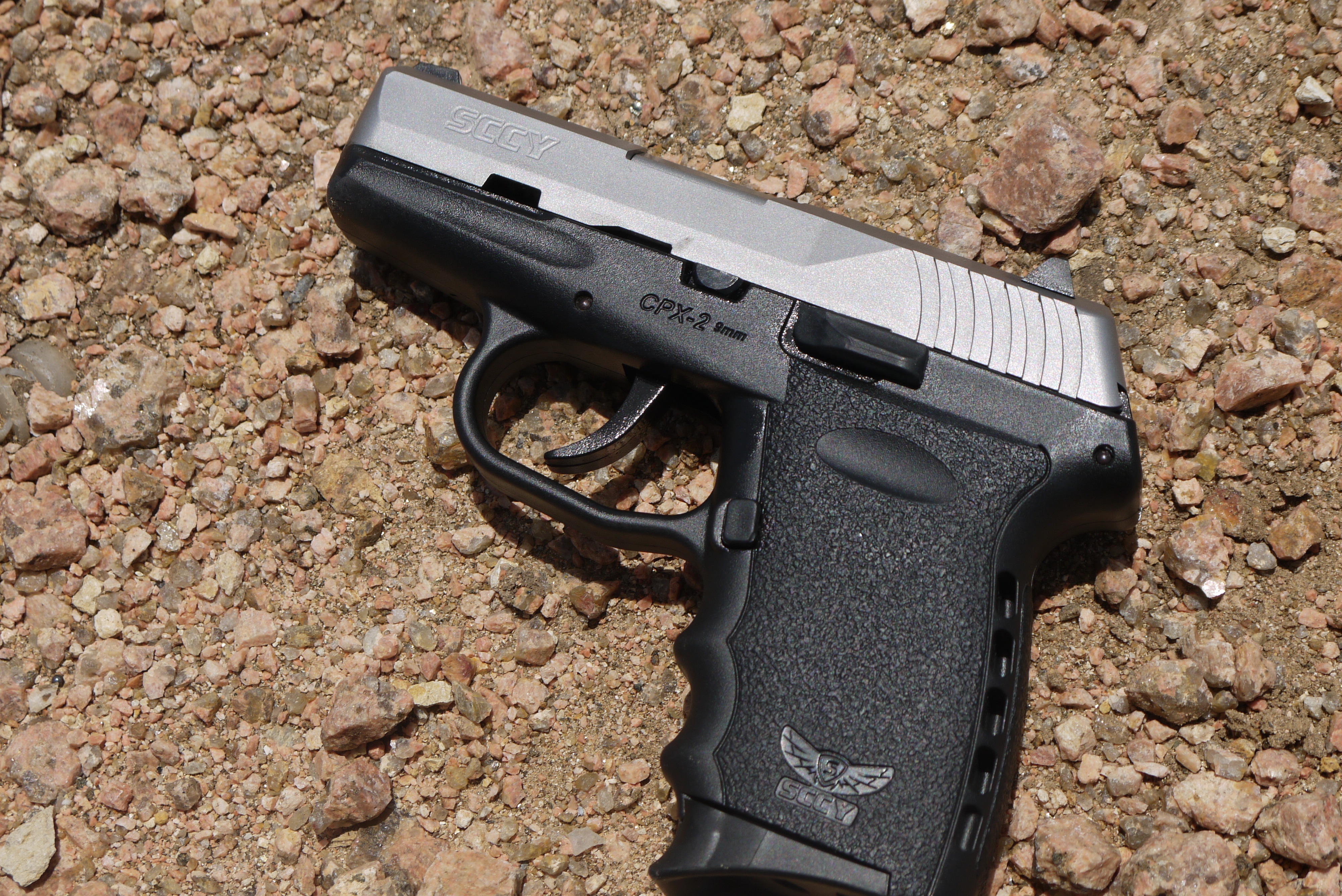 When you pick up a $250 gun, you expect it to feel cheap. But with the SCCY pistol, it feels the same as any GLOCK — only slimmer. None of the usual rattling or toy-like textures are present, only a polished and shiny gun. It even looks nice on the outside. Nice, compared to other polymer framed handguns, at least. It’s quite appealing on the inside as well. The gun takes down easily, kinda like some unholy combination of a 1911 and an FNS-9. Tools are unfortunately required to lift the takedown pin out of its hole, but it goes back together with fingers only. 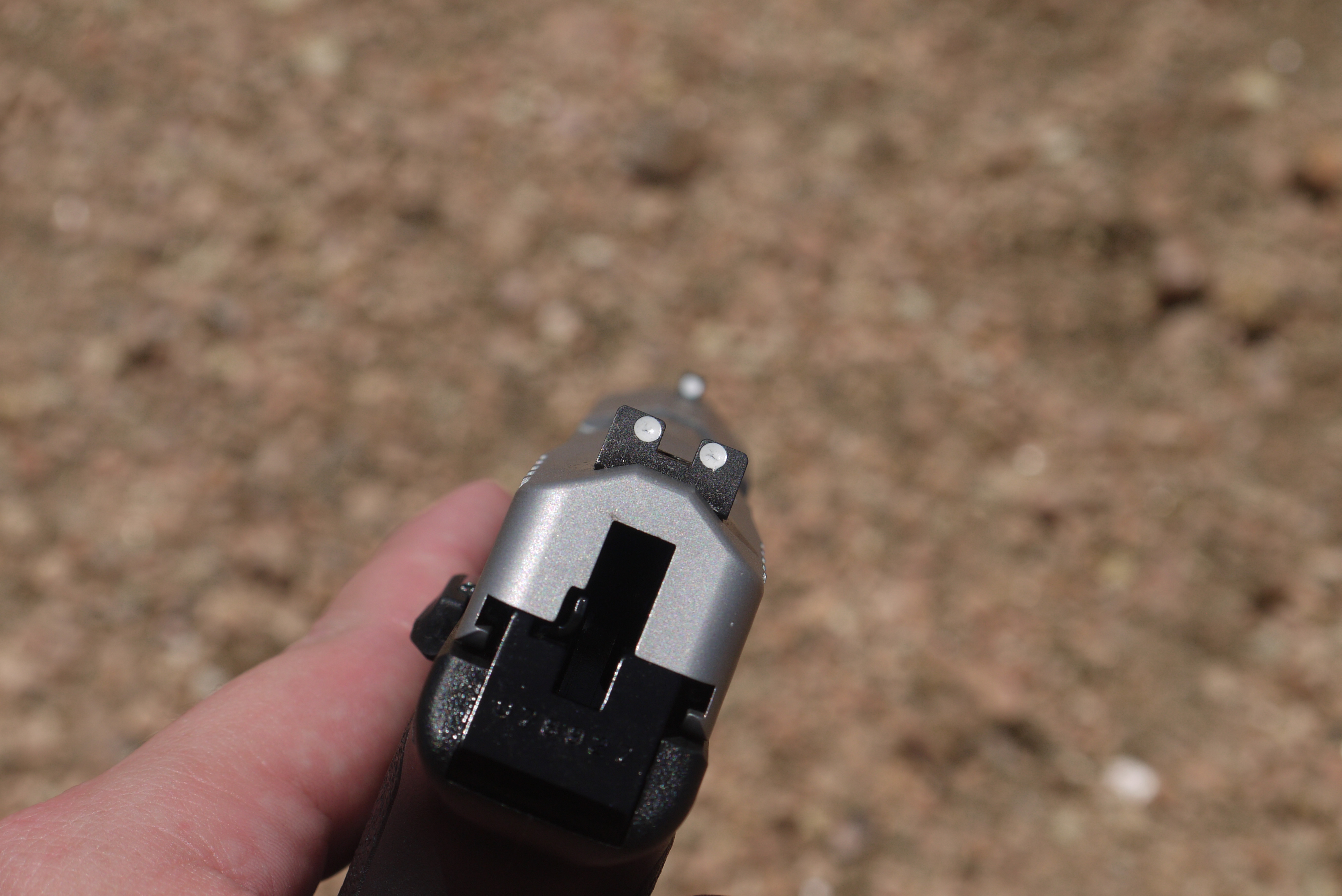 The white dots on both the front and rear sight are especially nice and big, highly visible white dots that can be seen even in low light. That’s not to say that you’ll actually be accurate, however.

The trigger is where the ship starts to fall apart. It’s a double action internal hammer job, so we already know the long trigger pull is going to be heavier than Joe Grine coming out of an all-you-can-eat Chinese buffet. And while it’s a smooth pull, there’s something about the combination of the flat-yet-curved trigger and the small form factor of the gun that kept me from actually putting rounds on target. At 10 yards I was “minute of paper” at best. Follow-up shots were a challenge, so con’t expect one-inch groups. While the gun will eat anything you throw at it, the magazines seem to object to steel-cased rounds. They caused this malfunction back at the loading table, and caused the stainless steel slide to lock back once on the firing line before the gun was empty. Then again, you get what you pay for when it comes to ammo. Personally, I wasn’t a big fan of the gun. I wasn’t able to be accurate with it, and the DAO trigger left something to be desired. Then again, I’m not this pistol’s target audience.

Thankfully I had brought a couple brand-new shooters with me the day I was testing it, and out of all the handguns we fired, this was the one they seemed most interested in buying. They had been thinking about getting a handgun for home defense, and even with the FNS-9 and Glock 17 sitting on the table, they kept asking about the SCCY CPX-2 and wanting to fire it.

There is something to be said about a good looking, cheap gun.

Accuracy: * *
At contact distance, where this gun is most likely to be needed, it doesn’t really matter. But “minute of bad guy” at 10 yards is the best I could muster.

Ergonomics: * * *
For me and my big hands, the handgun is too small. Even with the finger grooves and extended baseplates on the magazines, I couldn’t get a solid grip. Add the long and stiff double-action trigger pull and you have something that I would buy, fire once, and then chuck in the drawer, never to be seen again…until it’s needed.

Reliability: * * * *
I had no issues, except when I ran steel-cased ammo. The owner of this handgun tells me he has run everything from FMJ to hollowpoint ammo to +P loads with no issues, and I’m happy taking him at his word on that. Or, rather, my hand appreciates him testing the gun for me.

Customization: *
There are pretty much no aftermarket options for these handguns.

Overall: * * * *
While this isn’t my first choice for a home defense or concealed carry pistol, I can definitely see why SCCY sells so many. It’s cheap and reliable enough to meet the needs of a new shooter looking for a budget self defense firearm.