I spend a lot of time wondering why Cartier and Chanel don’t team-up with a gunmaker to produce fashionable pocket pistols. Actually, that’s not true. I spend most of my time worrying about paying off a mortgage the size of Argentina’s national debt. But I’m not surprised that Kimber has stepped into the upmarket breach, offering the first truly chi-chi pocket pistol: the Kimber Micro Bel Air.

Fresh Prince and Beverly Hills Hillbillies be damned, this special edition of Kimber’s Micro 9 variant was inspired by Chevrolet’s long-running Bel Air series of automobiles. It’s all about the finish. Kimber’s 1911-style mouse gun marries a glassine Bel Air Blue frame to a mirror-polished slide, accented with ivory-colored Micarta grips. It couldn’t be more American Graffiti if it tried. Not to put too fine a point (or tail fins) on it, the Bel Air is one cool cookie. As someone in touch with his feminine side — a man who’s not afraid to parade a brace of miniature schnauzers past lunching roofers — I welcome the pastel blue Kimber Bel Air into the pantheon of concealed-carry pocket pistols. But getting to grips with the Miami Vice color scheme-compatible handgun reveals an immediate problem: It’s slicker than a greased pig hurtling down a Slip ‘N Slide.

Skipping ahead to the shooting part of the program, my first shots at 5 yards all landed above the bull to the left. As did all subsequent shots. Suspecting a lack of marksmanship, I proffered the pistol to one of Red’s RSOs. Despite the Kimber Bel Air’s dainty, gleaming, barely-checkered aluminum backstrap, same result. The combination of slippery surfaces and stout recoil makes the slick n’ snappy little Kimber Bel Air corkscrew in the hand. Hence the shots landing northwest of the bull. The resulting minute-of-bad-guy group would be more than welcome in a defensive gun use, of course. But I’d be loathe to rely on the Bel Air at anything other than bad-breath distances.

To be fair, that’s true for the majority of mouse guns (although I’ve seen Jerry Miculek knock the antenna off a grasshopper at 50 yards using a Smith & Wesson snubbie). In that sense, the Bel Air is like all its competitors, only more so. 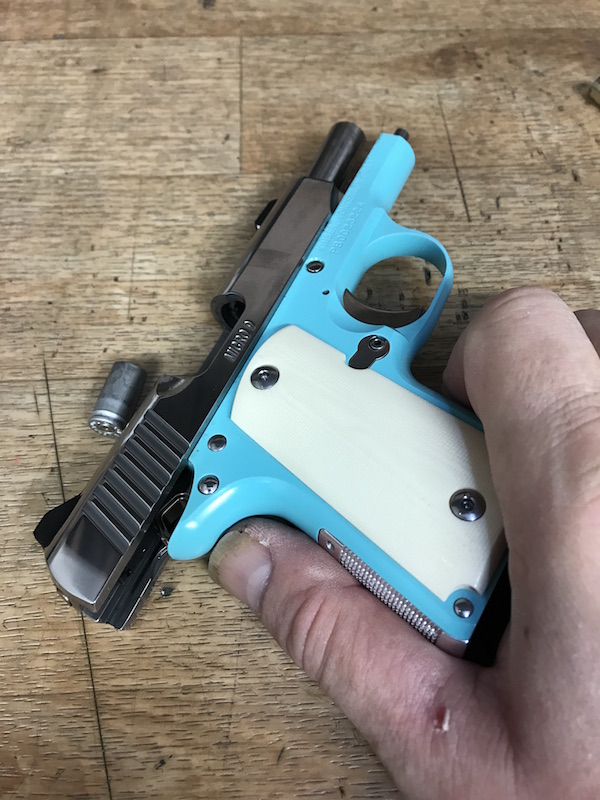 Practicing with this pistol takes it toll. The Bel Air’s frame-mounted safety dug into my thumb and gouged out a bloody keepsake. At the same time, my hand slipped down the two-finger Bel Air’s smooth ‘n shiny micro handle. After the first shot, my middle finger was holding on for dear life underneath the grip — right on a sharp edge at the bottom of the mag well. Although it wasn’t a bloody encounter, it was neither pleasant nor productive.

Switching from 147-grain ammo of various stripes to 115-grain rounds made no discernible difference to the Bel Air’s accuracy. When I placed my thumb over the safety — as I do with a full- or Commander-sized 1911 — accuracy didn’t improve. Nor did comfort. There was only way to hit the bull: Aim down and to the right and let the ballistic horse have its head.

In case the Bel Air’s jumpiness wasn’t enough to put me off the idea of carrying the nostalgia-themed firearm as a primary weapon, it was entirely possible to insert the six-round micro magazine into the gun without seating it properly — a problem I discovered when I racked the slide of the micro and came up empty. Not that a Bel Air owner is likely to practice or use combat reloads. But still … While I’m willing to shed a bit of epidermis for the team, I gave up firing the Bel Air after 350 rounds. Unlike early high-test-ammo-only Kimber Solos, the 9mm Bel Air scored high in dependability and cycled everything I fed it — from jewel-like Cap Arms brass to budget-minded Blaser aluminum ammo to Federal Premium hollowpoints. Also on the positive side: The Bel Air’s tight tolerances made racking the gun a genuine pleasure.

Ignoring the tragedy of the Lincoln assassination, our man Foghorn dubbed the Bel Air an “opera gun.” (A Bel Air is to a “real gun” as opera glasses are to proper binoculars.) Setting aside its utility vs. cheaper 9mm mouse guns, the Kimber Bel Air is beautiful. Unlike the pink versions of born-black striker-fired pistols, the Bel Air is a female-oriented firearm that begs to be carried (holstered) in a $1225 Balenziaga Giant 12 Envelope leather clutch. By the same token, the Bel Air 9mm is a gun. Tough guys may smirk, but if I was a sleek supermodel making my way from a Michelin three-star restaurant to my Jaguar F-Type, facing a déclassé lowlife intent on stripping my Bulgari diamond necklace off my San Tropez-bronzed skin, a Bel Air would offer a far superior form of self-defense than, say, an arched eyebrow.

In short, the Kimber Micro 9 Bel Air is a looker not a shooter. Would a less-slick frame and aggressive front-strap checkering have ruined the Bel Air’s je ne sais quoi? Je ne sais pas. As a harbinger of new stylish firearms appealing to new customers, no question, the Kimber Bel Air is a bellwether ballistic bauble. Whether that’s worth $864 is entirely up to you.

This gun and its unique bel air blue frame is a serious babe.

It’s called a micro for a reason.

You can’t be serious, darling!

Bereft of any effective grip checkering, the Bel Air’s mirror-smooth frame is slip-sliding away.

It goes bang. No failures with FMJ practice ammo or JHP personal-defense rounds.

The Bel Air is a bad choice for blowing away bad guys stopping a lethal threat at anything other than bad-breath distance. But its mild recoil is a superb choice for fashion-forward firearmistas (with small hands) who’d rather be seen dead than carry a traditional pocket pistol. Literally.

Ruger LCP .380 Holsters: How To Carry A Pint Size Pistol

Smith & Wesson 9mm Compacts: The GLOCK 19 Before the GLOCK 19