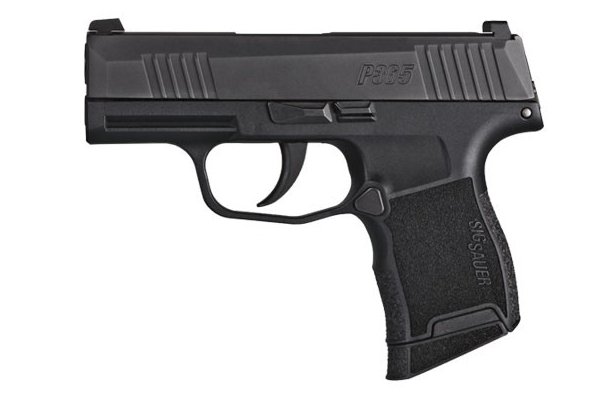 Most everyone has pretty much the same list of wants in a concealed carry gun. People want a small and light gun, with a good trigger, good sights and a decent capacity. If it shoots well and comfortably on top of all that, well, that’s just a bonus.

It’s akin to wanting your delicious gourmet pizza, fast and cheap, too. It’s easy to want everything, but reality usually gets in the way.

Not any more. At least when it comes to the CCW gun. As for the pizza? That’s another story.

SIG released their new P365 earlier this year to pretty much rave reviews across the board. Rave reviews, however, should be taken with a grain of salt, as many ravely reviewed the original Remington R51. And we all know how that turned out.

The good people at C.I. Shooting Sports in Normal, IL wanted me to try the new SIG. Like many indoor ranges, they have quite a fleet of rental guns you can shoot on their indoor range, including a lot of hot-selling, new guns. And “try before you buy” is never a bad thing.

They put one in my hand right away. It’s almost as if they wanted me to anger my lovely bride by letting another orphaned gun follow me home. Was it really as good as what the salesman said? Was it really “game changing” as the gun rags are seemingly so quick to write about every new offering that comes with an advertising contract?

This gun is better (exclamation point). And nobody gave me a testing and evaluation copy before I wrote this. Or an ad contract.

The P365 embodies everything concealed carriers want most. It’s smaller than most single-stack 9mm pistols, specifically the Glock 43, S&W’s Shield, Springfield XDs-9 and the Ruger LC9. I’ve shot all four of those, too, and the P365 has a better trigger and is more comfortable to shoot. With a capacity of 10+1, you’re also carrying more bubble gum than those aforementioned single-stacks. Because if you don’t have enough bubble gum to go around when things go south, you’re in real trouble. 12-round magazines with about a quarter-inch longer baseplate are available for a cool $48.99 if you want to upgrade by two more rounds.

The P365’s magazines have a unique taper to them, making them a hybrid of both double stack at the bottom and single stack at the top of the magazine. 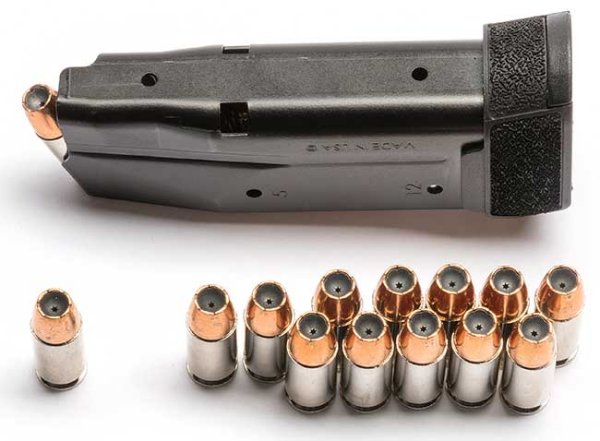 What’s more, tritium night sights come standard (they’re officially called XRAY3 Day/Night sights). After all, a majority of defensive gun uses happen in low light. SIG made the glowing front sight dot larger than the rear ones. Frankly, the front sight looks like a big, green beach ball out there. At 18 ounces, it’s light enough to forget about on your hip and heavy enough not to beat you up when you shoot it for practice or recreation. (Exotic metal snubbies… here’s looking at you!) The trigger felt and broke smoothly at about 5ish pounds.  Most folks will take this trigger every day of the week and twice on Sunday over a factory Glock. Like a revolver, the trigger breaks after a long, smooth pull (also not unlike the P320). That and keeping your you-know-what off the bang switch is your safety.

It fit my hand almost perfectly and quite comfortably. It’s got a fine texture that helps keep it quite securely gripped, yet (probably) won’t wear holes in your clothes or abrade your love handles. Smaller hands will appreciate the grip.  No, it does not have adjustable backstraps. That is a proprietary accessory rail up front, not a picatinny rail. SIG ships the gun with two 10-round magazines, one with a pinkie extension (see above) and one without that still accommodated most of my pinkie (see below). The magazines loaded without issue and seated on a closed slide. Once loaded, the gun did its thing. Shooting hundreds of rounds had me smiling pretty broadly.

I shot the Dot Torture Drill with the SIG. It’s a great way to get a sense of how well a gun shoots in various grips and exercises (strong- and support-hand and two-handed) compared to my beloved GLOCK.  I shot three shots from perfect at five yards – and none of those fell more than a bullet’s width outside of the 2” circle. Face palm. That’s better than I’ve been shooting with my gat of late, I’m embarrassed to say. Firing ten rounds at five yards (above), one shot each second, yielded a tight group and an even bigger grin on my face.

Field stripping didn’t require me to pull the trigger first (a selling point for safety) and came intuitively. Putting it back together took a couple of seconds longer, but no issues. Reliability: * * * * *
Flawless reliability (even when dirty). It shot everything I put through it. Nary a hiccup in sight.

Accuracy: * * * * *
I did my part and the gun did its part. Minute of bad guy? More like minute of button. Yeah, for a small pistol with a 3” barrel, it will put rounds in a nice, tight group.

Trigger: * * * * 1/2
For a factory trigger without any work, this one is excellent. I’m no trigger snob, but this is the best concealed carry pistol trigger I’ve tried.

Value: * * * *
The gun lists for $599. Given that SCHEELS store in Springfield, IL reportedly has a wait list of 30 people (who may have already pre-paid) at full MSRP, don’t expect to see discounts anytime soon. It’s a good value for what it brings to the table. Of course, it’d be a great value at $499. You get the idea.

Overall: * * * * *
The SIG P365 is like Stacy’s mom: it’s got it going on. For now, it is the gun to beat when it comes to general concealed carry or as a backup gun for the truly hard core. It’s a better pistol, hands down, than all the single-stack offerings by the other major manufacturers I’ve ever shot (which is most of them). I can’t sing its praises loudly enough.

Paired with your favorite inside-the-waistband holster, you’ll be comfortable and well-protected in your daily life. By the way, you can win one of these at the May 7th Sangamon County Guns Save Life monthly meeting at SCHEELS in Springfield, IL.