The Henry Big Boy Steel carbine in .357 Magnum/.38 Special may the handiest little rifle in the history of the world ever. Weighing in at a total of 6.5lbs and two inches shy of three feet in length, it’s a breeze to carry all day, and maneuvers easily in the tight Dewberry thickets and cedars, where I find most of my hogs. The carbine comes with swivel studs attached, which is much appreciated. And you’d do well to mount a shooter’s sling on this rifle because once on your shoulder, this little carbine virtually disappears on even the longest outings. As I have mentioned before, there’s a good reason that our grandparents carried a revolver and a rifle chambered in the same caliber. St. Elmer Keith’s .357 Magnum is another point in favor of the practice. If the terminal effect of a .357 Magnum round is impressive in a pistol — and it is — then that same round from a 16” or 18” carbine-length barrel is absolutely spectacular.

To give you an idea of what the .357 Magnum will do from a rifle, that 158g round that you use in your Ruger Blackhawk with will now produce just barely over 1,000ftlbs of energy from the muzzle from this rifle. The M4 I used in combat firing the standard M855 NATO round will produce barely 100 ft-lbs more, and I’ve seen men killed at 400 yards with it. It takes a skilled marksman to take game at 100 yards with the .357 Magnum carbine, but it certainly can be done.

More likely are deer hunts in states that require a straight wall case, or deer and pig hunts all over the country where brush is thick and the ability to easily maneuver an effective weapon is more important than long range shooting capability. This, the smallest of the Henry lever guns I’ve reviewed, is also the least adorned. There is no gleaming silver or brass, just a black-blued receiver and barrel, and a quality walnut stock. The fit and finish is altogether good. The finish being a little better than the fit. The finish is the typical satin black found on most of the steel Henrys. There’s no high polish, but there isn’t meant to be. This is a working gun. Still, there are no sharp edges, no tool marks, and absolutely no unevenness in the appearance. As typical of Henry guns, it’s done quite well. As for the wood to metal fit, the wood was slightly oversized throughout the gun, and there isn’t a flush fit to the wood/metal points. The quality of the walnut stock is good, if not exceptional. Then again, I wouldn’t expect it to be at this price. The barrel is round, not octagonal, and this particular model include the large cocking loop. If I were somewhere cold where I’d be wearing heavy gloves, that big loop would be very welcome. 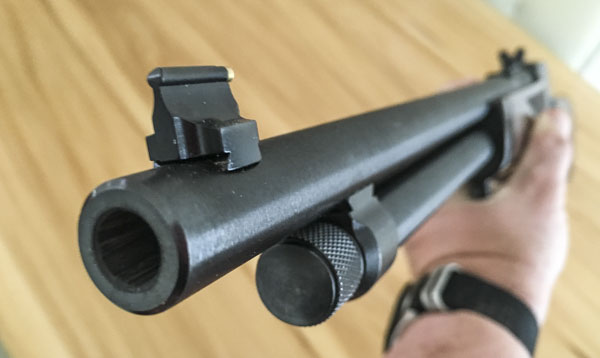 Unlike many other lever guns, and most of the Henry Rifles, there’s no barrel band on the Big Boy Steel carbine, but a more traditional rifle-style end cap. As the barrel isn’t truly free floated, I doubt that this makes any improvement in accuracy, but seems to be more of an aesthetic choice. The rifle also includes a rubber recoil pad. Although welcome for comfort, I seriously doubt it is required for anyone but the most sensitive shooters. With commercial .357 Magnum loads, the adults I had shoot this gun laughed at the recoil, and even my 12-year-old son was surprised that it didn’t kick.

As with almost every other Henry rifle I have ever shot or reviewed, the action on this little carbine was buttery smooth. I can cycle the action with only my pinky. The trigger is also typical Henry with maybe a millimeter of pre-travel followed by a crisp break.

As with all Henry lever guns, save the Long Ranger, the Big Boy Steel is tube fed, without a loading gate. There’s no cross bolt safety, no half cock and there doesn’t need to be. With the time-proven patented transfer bar, he rifle will only fire if the hammer is fully cocked and the trigger is pulled. That means you can carry safely on a loaded chamber with the hammer down while you stalk. The sight setup is also a familiar one for me by now, and one I’ve come to very much appreciate. 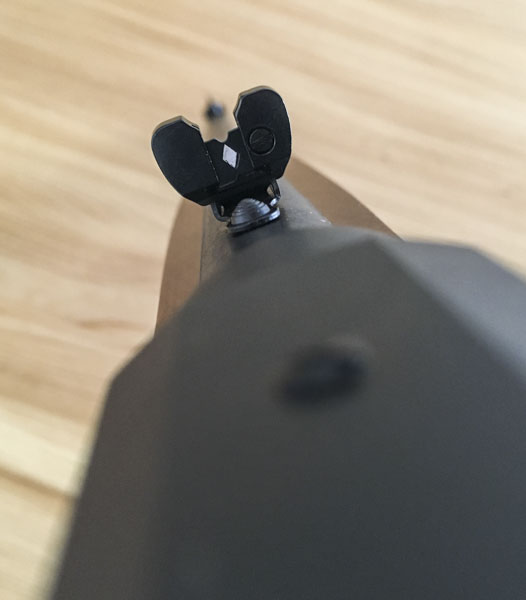 The white diamond insert is what seals the deal for me. On a fast-moving target, say a sounder after that first shot takes out the sow, the wide aperature of the rear sight gets me within minute of pig. But when I need that longer or more precise shot, I can use the insert to further align the front sight against, greatly diminishing my group size. It’s a great set up for this kind of rifle.

As usual, I shot this rifle a day after the reliability testing, without cleaning the rifle in any way. Although I like the sight set up, I had a hard time getting the sights into any kind of acceptable focus enough to shoot. Too much time reading Texas Ranger history for an upcoming article had ruined my eyes. Not wanting to waste a day, I mounted a Weaver K6 scope — easy to do as the receiver is already tapped — and put out a few groups. Three five-round groups all measured under two inches, with the Hornady 125gr XTP round scoring 1.8”. The next day, after giving my eyes at rest, I tried again and found it much easier to focus. This time, using solely the iron sights, none of my groupings were over 3¼” using any ammunition, and the inexpensive Magtech 158gr JSP printing the best scores at 2.5”. Not bad at all, and more than good enough to hit the vitals at likely distances.

I have heard some horror stories about the .357 Magnum in a lever action rifle as far as reliably loading different rounds. For this particular carbine, those stories proved to be fairy tales. I put 250 rounds through the rifle over four days prior to accuracy testing. Those included, Sellier and Bellot 158gr FMJs, American Eagle 158gr JSPs, Magtech 158gr JSPs, Armscor 125gr FMJs, Hornady 125gr FTXs and Hornady 125gr XTPs. 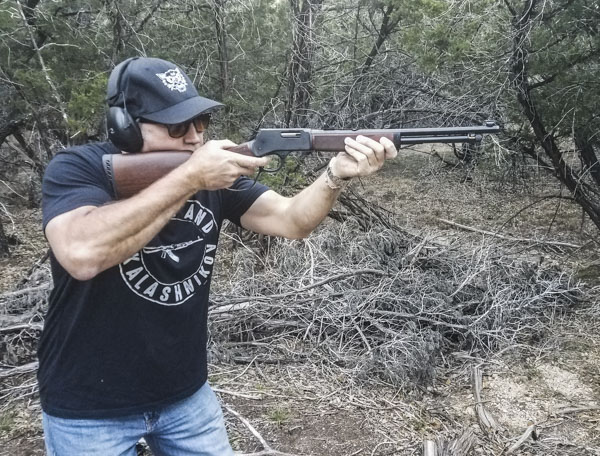 As a true oddball, I even threw in some old PMC Ultramag .38 Special +P J 66 grain Tubular rounds. As long as I fully cycled the action, there were no problems loading, feeding, or firing any of the rounds. As with all traditional lever action rifles I’ve tested and owned, if I tried to slowly cycle a round, I was able to induce a miss-feed. I lubed the gun prior to the first shot, and then at no point during my review did I clean or lubricate the gun again in any way. The result: no issues. I had a buddy try the gun who hunts only occasionally, and shoots about as much as he hunts. He fell in the love with the Big Boy Steel. He was hammering plates with ease with at 15, 25 and 50 yards and tried to buy the gun from me. I pointed him to the Henry website.

He wanted one for his truck and the Big Boy Steel is an ideal truck gun. It’s enough gun for even novice shooters out to 50 yards on anything we have native to Texas, and probably enough for all but the biggest of black bears as well. Plus, on the off chance that you should need a firearm for self defense, eight rounds of extra-fast .357 Magnum should be more than enough for anything on two legs you might encounter.

Style and Customization * * * *
Fit and finish are good, if not great. I would have liked a better wood-to-metal fit. I’m a sucker for Henry’s shinier models. Still, you can swap the sights if you want, and it comes tapped for glass with quality swivel studs included. And if you should so choose, better wood is available.

Reliability * * * * *
With a more than fair variety of rounds, the gun loaded, cycled and fired over 300 rounds flawlessly for 310 for this review. That’s (sadly) more than most hunters may ever fire their rifle.

Accuracy * * * *
With iron sights or glass, if you miss the breadbasket on any game at 150 yards or under, it’s all your fault.

Overall * * * *
An absolutely spectacular hunting rifle for swamps and heavy woods. No pig will be safe in its presence. Other calibers available in the same model now include the .45LC, my beloved .44 Magnum. The .327 Federal and .41 Magnum will be available in the Spring of 2017.