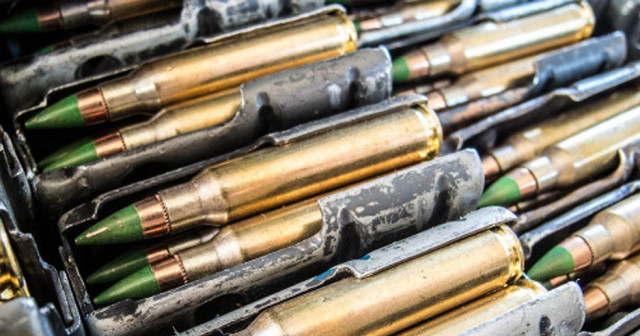 On Monday, Representative Patrick McHenry (R-North Carolina), introduced H.R. 1365, the Ammunition and Firearms Protection Act, in the U.S. House of Representatives. The bill is a reaction to the recent kerfuffle over the BATFE’s proposed M855 ammo ban, which would add the exception to 18 U.S.C. sec. 921(a)(17), which defines “armor-piercing ammunition” . . .

Representative McHenry described his bill as being prompted by an “assault on our Constitution and Bill of Rights.”

“The Ammunition and Firearms Protection Act would put an end to this attack on our Second Amendment by ensuring this popular ammunition used by countless law-abiding American sportsmen remains available and not subject to any future ATF bans,” McHenry said in a statement.

The ATF argued the proposed bullet ban would have protected police officers from bullets that were traditionally used in hunting rifles but can now also be used in handguns, which are more easily concealed; it backed down amid mounting pressure from Republicans and the gun lobby.

On the other hand, as The Hill reports, Representatives Jackie Speier (D-California) and Steve Israel (D-New York) will be offering up a new bill to ban the ammunition.

House Democrats will introduce legislation this week that would block handguns from firing any sort of ammunition that can penetrate body armor worn by police officers.

The Modernize Law Enforcement Protection Act is expected to be introduced later this week by Rep. Jackie Speier….

“The Second Amendment does not give anyone the right to use a bullet that is specifically designed to pierce the protective gear worn by police officers,” Rep. Steve Israel…, who is co-sponsoring the bill, told The Hill.

“The Second Amendment, which I support, had well intended 18th century protections, but we live in a world with 21st century criminals and increasingly lethal weapons,” he added.

Is anyone fooled when a politican begins a sentence with “The Second Amendment, which I support…”? It’s kind of like when someone says “with all due respect“….

Speier’s and Israel’s bill (which has not yet been introduced,) is apparently intended to be much more aggressive in going after the right of Americans to keep and bear arms than a bill introduced earlier by Representative Eliot Engel (D-New York) (H.R. 1358 – the Armor Piercing Bullets Act of 2015,).

Engel would specifically exempt 40 grain .22 rimfire ammunition and rounds specifically intended for one-shot target pistols from the definition of ‘armor-piercing ammunition’ while simultaneously authorizing regulators to go to town on anything else that otherwise meets that definition.

Given the political makeup of the House, I’d be more than a little surprised if the Democrats’ bills get anywhere — they sound just like red meat for a political base that has been conditioned to accept “guns bad!” as one of the slogans to shout at rallies.

Still, it’s nice to see the political opposition stake out their positions so clearly. If Israel, Speier, and Engel want to openly put themselves on the side of those who would restrict the civil rights of Americans, it won’t have been the first time members of their party have done so.

(As an aside, the current definition in the U.S. Code for “armor-piercing ammunition” is as follows:

(i) a projectile or projectile core which may be used in a handgun and which is constructed entirely (excluding the presence of traces of other substances) from one or a combination of tungsten alloys, steel, iron, brass, bronze, beryllium copper, or depleted uranium; or
(ii) a full jacketed projectile larger than .22 caliber designed and intended for use in a handgun and whose jacket has a weight of more than 25 percent of the total weight of the projectile.

That’s right, under section 921 of the U.S. Code, “armor-piercing ammunition” can only be fired from a “handgun”. And they wonder why we laugh when the anti-gunners talk about passing new laws.)