If you were asked what the most proven combat optic in the world was, what would you say? If your answer was not the Trijicon ACOG, you answered wrong. Trijicon has been around since 1981, however, the beloved ACOG (Advanced Combat Optical Gunsight) was not introduced until 1987.

The ACOG is a fixed power optic that was originally only offered as a 4x with the first TA-01 model (Insert Picture 12). Since then, Trijicon has brought to market variants ranging from 1.5x all the way to 6x. Design and features have remained relatively unchanged since the TA-01, with the most noticeable change being the addition of fiber optics for daylight bright reticles. ACOG’s didn’t exactly take off immediately upon Trijicons unveiling.

It wasn’t until 1991 and Operation Desert Storm where the US started to take notice and actually started to deploy them in combat theaters. The durability of these optics has been Trijicon’s most praised attribute, and was just what the military needed for a fighting rifle. The ACOG was far beyond anything of its time, and to this day it remains just as relevant as it was in 1991.

The use of a fixed 4X optic just made sense for over three decades. Since the ACOG’s creation, the vast majority of the United States’ conflicts have taken place in the mountainous middle east, with most enemy encounters occurring several hundred meters away. For this reason, the 4×32 models have been the most widely used optics in the US military.

What about when combat theaters evolve? When fighting occurs in more urban areas? Well Trijicon has an answer. Meet the TA-44-C mini ACOG.

This 1.5×16 optic is remarkably compact at 4 inches long and 5.1 ounces in weight, with all the durability and reliability of its bigger brother. This one rests on an American Defense Manufacturing QD mount.

The body of the TA-44 is forged from 7075-T6 aluminum, which is the gold standard for a combat optic. The tube is then finished off with a matte black anodized finish that almost gives the appearance of a rubberized exterior (Insert Picture 2).

The lenses on the mini ACOG are multi-coated and offer light transmission and clarity that is second to none. I can say with confidence that this ACOG has the clearest glass I have ever seen on an optic.

The advertised eye relief on the TA-44 is 2.4 inches, but it is much more forgiving than Trijicon gives it credit for. I was able to get equally good eye relief from two inches all the way out to over six inches. The trade-off you have to swallow for the forgiving eye relief is the field of view, or should I say lack thereof.

The 16 mm objective lens will give you a smaller field of view than other models (Insert Picture 5), but what do you expect from an ACOG this small? The windage and elevation turrets are both capped and tethered; a nice feature we’ve seen from Trijicon for decades.

I won’t give them too much credit as any optic intended for combat should feature that in my opinion. Adjustments on the TA-44 are ½ MOA per click and can be made easily by hand. Clicks are audible and tactile. No complaints in that department.

Trijicon offers several different reticle choices and colors for the TA-44 series, but I opted for the ACSS reticle with the red illumination. This specific model (TA44-C-400306) is only available through Primary Arms, due to the ACSS reticle being the work of Dimitri Mikroulis of Primary Arms. 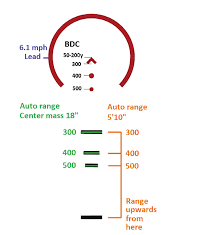 For those who aren’t familiar with the ACSS reticle, it’s excellent. The Advanced Combat Sighting System reticle comes in several different shapes and sizes. This specific TA-44-C features the CQB-M5 version which we’ll be discussing here. However, you can find the ACSS in its most simplistic form in several red dots, as well as its most complex form in long range precision optics.

The CQB-M5 gives you a 2 MOA chevron in the center with 1.5 MOA and 1.2 MOA dots underneath. Encompassing all of this is a very large horseshoe. Underneath this horseshoe is a series of four horizontal ranging lines.

What’s amazing about this reticle is everything you can accomplish with it. First, it gives you the ability to account for bullet drop out to 500 yards. Second, it gives you the ability to range a target, based on the size of the average male being 5’10” and eighteen inches wide. Lastly, the ACSS provides a lead point on the outer edge of the horseshoe for a target moving 6.1 MPH (average running speed).

All of these capabilities are wrapped up in a surprisingly simple reticle. If you’re anything like me, when I first discovered the ACSS, you may doubt the reticle’s accuracy. However, from my testing, I found that the ranging and drop compensation features are spot-on and there are several videos out there supporting that fact.

As good as the ACSS reticle is, in the TA-44, it does suffer from being incredibly small. The capabilities of the reticle are slightly overshadowed by the fact that using it takes more focus than an eye exam at 60 years old.

While shooting on the move, I used the TA-44 primarily how I use a red dot, and being only 1.5x, this worked out fine at close distances. The only time I could really use the reticle how it was intended, was when shooting off of a rest. Even that took quite a bit of squinting, however I was able to pick up the individual aiming points and easily make hits out to 300 yards.

The reticle illumination in this mini ACOG is perfect. Larger models have long suffered from being overly bright in direct sunlight and the go to remedy for this has long been to tape over part of the fiber optic. However, with the TA-44 having a much shorter fiber optic, I found that the reticle never got overly bright in sunny conditions.

For when the lights go out, tritium has you covered. You won’t get the same brightness as you would through the fiber optic during the day, but the tritium illumination works perfectly in low light conditions when a super bright reticle isn’t necessary.

The TA-44 has an intuitive way about it in terms of illumination. It works better than any automatic adjusting reticles I’ve used and I honestly trust this ACOG to know what brightness level I need more than I trust my own eyes.

The TA-44-C takes first prize as my favorite optic. It’s rugged and seemingly bomb proof exterior has gained my respect and I am confident that this optic will endure any scenario it could be put through.

The fact that I never have to worry about batteries, while still getting brightness that you would only expect from a battery-powered optic is fantastic. The clarity of the glass is simply unbeatable. I would argue that Ray Charles could have made positive target identification through this glass.

I trust this optic as much as I trust the MK 18 in sits on, and that’s saying something

Quality * * * * *
Trijicon is known for making quality optics. The TA-44 is no exception. Ask anyone who owns one.

Durability * * * * *
Do I have to stop at five stars? This is a no brainer. Just look at the ACOG’s track record. It’s seen hard use in conflicts on every continent. There’s a reason the military just keeps getting more or them, and it’s not because they don’t like batteries.

Clarity * * * * *
As I said earlier, this is the clearest glass I’ve ever seen. Edge-to-edge clarity is consistent all the way around. This optic sees things clearer than my naked eye can.

Reticle * * * *
I can’t speak for the other reticles offered in the TA-44, but the ACSS is the Swiss Army Knife of reticles. It can do more than you’ll probably ever use it for. However, all this greatness is borderline useless due to how small it is in this optic. Shoot from the prone or off a rest and you’re good. If not, good luck.

Overall * * * * *
I can’t say enough good things about this optic. You get the legendary dependability of the ACOG with the size and weight of a red dot. No batteries needed. If you’ve been looking for a CQB optic, look no further.