I made my trip around the custom world over the years and some time ago I finally settled on the Tucker Gunleather Cover-Up Plus as my IWB holster of choice for all of my carry guns. Why? Most IWB holsters are adjustable for either cant or height, but not both…or not adjustable at all.

The Tucker Cover-Up line of holsters were one of the few IWB holsters that I could find that were adjustable for both cant and ride height. Let’s face it, humans come in as many shapes and sizes as there are people. The more adjustment an IWB holster offers, the better the chance of finding that perfect, comfortable fit for day-long carry.

The Cover-Up line is made of leather. I don’t know about you, but I find Kydex rubbing up against my skin all day long to be very uncomfortable; especially in hot and humid South Florida where I call home. I would much rather have leather, which, after all, is actually skin, rubbing against my hip and buttock all day instead of plastic.

Kydex is also rougher on gun finishes than leather as well. I don’t mind being rough on the finish of a utilitarian pistol like a GLOCK, but I want to keep the finishes on my Wilson Combat and Dan Wesson carry guns looking as nice as possible; leather is the only way to do that. 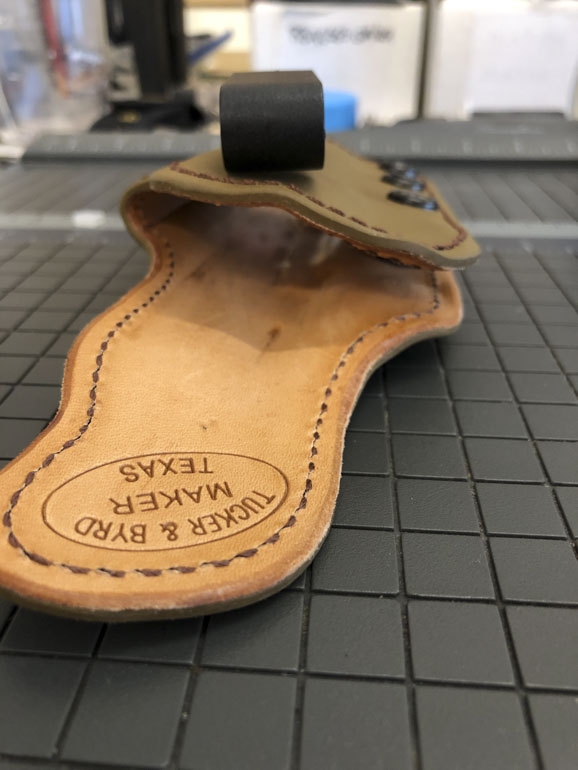 I saw Tucker had a new IWB holster offering, the DC-2 single clip holster which is part of a new line for them (DC stands for deep carry). The DC-2 is Tucker’s IWB option in the DC line. It looks very much like my favorite cant- and height-adjustable Cover-Up holster, but the construction is different.

The DC-2 is made with a Boltaron shell covering a leather interior. For those of you not familiar with Boltaron, it is a thermoplastic that has a softer, more leather-like feel to than Kydex with better heat resistance. All of the DC line holsters can be ordered in tan, black or teal with either black or brown stitching. It is my understanding a black cherry option will be available in about a month. If I had one criticism of the Cover-Up rig, since it is all leather, it’s not very rigid. The Cover-Up Plus dealt with that by adding support to the mouth of the holster to make reinserting the pistol after drawing a bit easier. But it’s not perfect; I find I need to use my free hand to help nose the gun back into the holster.

Though Boltaron has the look and feel of leather, it’s much more rigid than leather; so the DC-2 keeps it’s shape and makes re-holstering with one hand a snap. Boltaron is even thinner than leather, which makes the DC-2 less bulky than the all-leather Cover-Up. There’s one last feature on the DC-2 that I really appreciate that could easily go unnoticed. The belt clip is set up in such a way that it is slightly offset at an angle from the holster itself.

As a result, the grip of the gun is pressed firmly and flush up against your body; it does not stick out from your side at all. Angling the belt clip in this way serves the same purpose as the “claw” feature you see attached to many Kydex IWB holsters these days, and accomplishes the same goal without the added bulk.

Tucker’s Cover-Up holsters don’t have this feature because the leather-only construction isn’t rigid enough to maintain the offset angle of the below clip.

It seems that I have found myself a new IWB holster for my EDC. I have been saying for years the Cover-Up Plus is the best IWB holster on the market. Those days are over. The king is dead, long live the king.

Comfort: * * * *
Boltaron is just as comfortable against your skin as leather, and much more comfortable than Kydex.

Concealability: * * * * *
All of my commander-sized 1911 Pistols disappear under a t-shirt as long as the shirt isn’t skin-tight. I know all about wearing t-shirts and concealed carry; I live in South Florida and carry a gun 15 hours a day, 365 days a year.

Value: * * * *
I have paid twice the price for custom IWB holsters that are neither as functional or as comfortable as the Tucker DC-2 IWB.

Overall: * * * *
The Tucker DC-2 IWB just wins no matter what aspect or feature you consider important for an IWB holster. I have tried them all, the DC-2 is simply the best at any price.