March 11, 2014: the U.S. Patent Office approves a patent for the Advanced Combat Sighting System, or ACSS. This novel reticle design combines near-instant, intuitive ranging of human targets out to 800 yards with built-in bullet drop, windage, and running target compensation markings. A full review of Primary Arms’ 1-6X ACSS is forthcoming. But, for those looking to range and engage targets a little less grave than enemy combatants, today we’re checking out a version of the ACSS reticle designed for ranging clay pigeons, cans, and bottles out to 200 yards. It’s built into the Primary Arms 6X 22LR scope. . .

The reticle is the star of the show, so let’s start there. 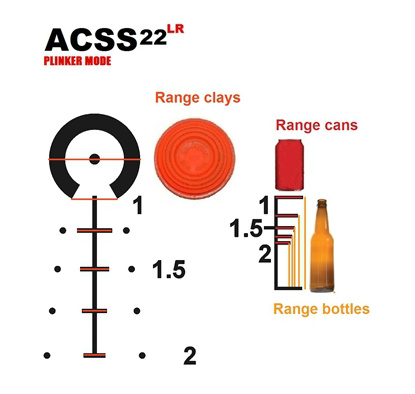 On the right side of the reticle is a ranging tape for cans and bottles. The horizontal width of the top five lines corresponds to the width of a can at 100, 125, 150, 175, and 200 yards. To range a bottle, measure from the bottom, up. Once you’ve ranged your can or bottle, use the center tape to align the appropriate crosshair with the target. Squeeze that trigger. It works. It’s freakin’ easy. Yes, you too can hit clays, cans, and bottles with a .22 — with confidence — out to 200 yards. Time to win some bets.

Oh, and if you’re more of the varmint hunting type, there are a lot of critters that can be easily compared for size against these three items that we’re all so familiar with. Heck, a clay pigeon approximates the body size of a lot of birds, eh. Like the “real” ACSS, this .22 reticle variant is simply awesome. But let’s not forget that it has to go in some sort of optic and there’s plenty of opportunity to screw up a good thing with a cheap, unreliable scope. At an MSRP of $119.99 I was a bit worried that a cheap scope is precisely what I’d receive, but instead I got an inexpensive one.

The quality of the glass is better than you’d expect from a Chinese-made scope in this price range. In fact, one of the reviews on Primary Arms’ website claims the clarity in this little 6X is better than a 4X rimfire Leupold. That I cannot confirm or deny, but it certainly is bright and crisp as this cell phone photo attempts to show: Diopter is adjustable to maintain a clear reticle despite your wonky eyesight. Turrets click cleanly and solidly without the need for tools. Each click is 1/4 MOA. By loosening the two bolts and removing the turret, it can be re-zeroed against the zero indicator dot. The tube is 1″ in diameter, and I believe is a one-piece aluminum extrusion. I struck out for the woods of N’Idaho and randomly placed clay pigeons and cans of Ruby Red Squirt as far out as I had line-of-sight through the thick forest. The actual ranges to any of the targets were not known, leaving it for the reticle to determine. And determine range it did. I worked my way out to about 75 yards, hitting every target on the way, and then decided to skip to the farthest clay pigeon out there. It fit somewhere in between the 125- and 150-yard dashes — closer to the 150 though — so I held appropriately…and…center punched the clay. The middle broke, but the outer ring was still sitting on the fallen tree. Held again, just higher this time, and nailed the ring. Splash one clay. My laser rangefinder later confirmed the distance at about 140 yards.

The farthest target, though, was the Squirt can seen above. This betrayed a bit of a weakness in the .22 reticle, which is a lack of illumination. The black ranging tape was difficult to see against the dark can hiding in the heavy shade of thick forest. The reticles were visible enough to use for accurate shooting, but were too hard to see for ranging purposes. Clays, thanks to their near-neon color, caused no such issue.

Still, knowing the can was a few yards farther than the farthest clay, I just centered the 150-yard crosshair on it and…missed. A slight side-to-side breeze had kicked up and it was enough to drift the bullet off target. I used a half-5mph-dot windage hold and drilled it. Squirt squirt.

For the record, the bullet drop compensation is aligned with the velocity of most bulk box ammunition as well as CCI’s Mini-Mag. Basically, anywhere from about 1,200 fps to 1,300 fps and you’re dead-on. That said, I also had great success with subsonic rounds at 980 fps by simply adding like 30% to the range estimations (e.g. range a can at 100, hold for 130).

My impression of the weight and feel of the scope isn’t extremely high, but functionally it has been a rock star. Turret adjustments are spot-on and solid, glass is great, reticle is clear. And, man, the reticle. How freaking cool is that? It just flat-out works.

Gone are the days of walking in .22s at long ranges or wildly taking a stab at range estimation. This thing’s like a magic trick, and I fully intend to win money from my friends with it.

Feel & Function * * * *
A bit of a mixed bag here, as I think externally the scope feels and looks cheap. However, the turret adjustment feel is quite good, and functionally this thing is totally solid. The range-finding, BDC reticle rocks harder than a convertible on prom night.

Reticle * * * * *
Yup, awesome. Just to spoil the 1-6X review, it’s amazing also. I slapped it on my AR, zeroed it at 100, and proceeded to just drill steel all the way out to a half mile. Range estimation is so darn easy, and the BDC holds are dead-on.

Overall * * * * *
Love it. Fixed 6X zoom is great for 25 to 200 yards, image is bright and clear and parallax-free, price is reasonable, and the way the ranging and bullet drop compensation work together is as intuitive, easy, and effective as it gets.