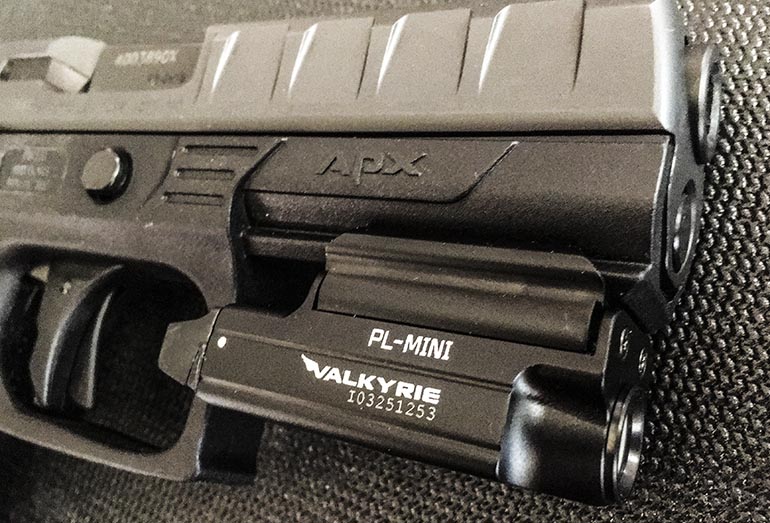 To weapon light, or not to weapon light. That is the question many gun owners ask themselves. Perhaps the most frequent use of pistol-mounded lights is in the service of home defense. Many a nightstand gun has one at the ready for the dreaded bump-in-the-night situation.

However, most of them are large and relatively expensive. But those are two drawbacks the Olight PL-MINI Valkyrie doesn’t suffer from. This tiny rail-mounted light packs an impressive 400 lumens in a very small package. The PL-MINI Valkyrie uses a USB rechargeable lithium-ion battery and comes with all the hardware (and even a tool) to ensure it will mount on your pistol (as long as your pistol is big enough…more on that later). The Valkyrie coms with a GLOCK rail spacer installed. It also includes a slightly wider 1913-size spacer, along with two screws and a tool for installation. The PL-MIN Valkyrie charges via a magnetic attachment point on the bottom of the light. Simply plug the charging cord into a power source… And attach it to the light. It fully recharges in about 45 minutes. Once you get a green indicator, you’re good to go. Mounting the light couldn’t be quicker or easier thanks to the quick-release lever, a welcome change screw-mounted lights. The Valkyrie actuates through two toggle switches, one on either side of the light. Rock the switch down momentarily to turn it on. Hit it again to turn it off. If you hold the switch down for any length of time, it goes into momentary mode and will turn off as soon as you release it. There’s no strobe option. While the PL-MINI is small, it won’t mount on just any pistol with a rail. Here you can see it on a full-size Beretta APX with a four-inch barrel. Anything shorter is problematic. While it clamped onto my FNS-9c the spacer wasn’t in one of the rail gaps and the unit extended past the muzzle. It won’t mount at all on smaller guns such as a Springfield XDs, Smith & Wesson M&P9 Shield or similar short-barrel pistols. Those 400 lumens are generated by a Cree XP-L HI emitter. The light is rated at 70 minutes of run time, but I was only able to get about 60 minutes out of it. That said, that’s a lot of time to run any pistol light, particularly one used on a home defense gun. You’ll only get the full 400 lumens of power for about the first five minutes of continuous run time. After that, the Valkyrie gradually powers down to about 70 lumens, still enough for plenty of illumination. That’s to protect the unit from overheating and to give you more total run time.

If at any time after five minutes you need more candlepower, simply cycle the light off and on again to jump back up to the full 400 lumens of output.

When the light is almost drained, a small red LED on the side (above) tells you it’s time to plug it back in. Four hundred lumens is a lot of luminosity. That’s a 50 foot distance in the photo above, more than enough to illuminate any distance in your house in a home defense situation. And if you need to take it out in the elements, the Valkyrie is IPX6 rated for water resistance. That means it’ll stand up to a very stiff thunderstorm and keep on going. Just don’t totally submerge it in water, OK?

One of the biggest plusses the PL-MINI Valkyrie has going for it besides its performance is its price tag. At only $79.95, it’s downright cheap. Given its size and output, it’s directly comparable to the Surefire XC1. The Surefire isn’t rechargeable (that may be a plus or a minus, depending on your POV) and puts out only 300 lumens. But the XC1 costs almost three times the price of a Valkyrie.

With its 400 lumens and affordable price, the Olight PL-MINI Valkyrie is a very attractive option for your full size home defense gun. Plus, it’s easy to move from pistol to pistol, should you want to. Just don’t expect it to mount on your smaller guns.

Brightness * * * * *
Four hundred lumens from such a small package is impressive. That’s more than enough to handle any situation you’re likely to find yourself in.

Ergonomics * * * *
The two rocker switches mount at the end of your pistol’s trigger guard and are easily accessible to anyone with average to large hands. Smaller-handed shooters will have to reach a little, but it’s very do-able.

Mounting * * * *
The built-in quick-release lever and GLOCK/1913 compatibility are excellent. Attaching or removing the PL-MINI Valkyrie is a snap and and it stays securely mounted even when knocking it around. Just don’t buy one expecting to use it on a compact pistol.

Overall * * * *
The Olight PL-MINI Valkyrie is an excellent option for a full-size home defense gun. It’s relatively small, light weight and more than bright enough to handle virtually any situation. Just keep in mind that it’s made for pistols with a minimum barrel length of four inches.