One of my gripes about the Remington 700 XCR Tactical Long Range .308 rifle: it’s lacking in the “tactical” department. I’m not talking mall-ninja tactical (a.k.a., “tacticool”). The Remy doesn’t need a built in knife sharpener, nor should it convert into an emergency shovel. I’m referring to upgrades and add-ons that actually add to the intended purpose of the rifle. . .

In the original write-up, I mentioned that the TLR should have come with a stock with an adjustable cheek-piece. Instead of borrowing the B&C Varmint/Tactical stock that Remington installs on Target Tactical model, they decided to go with the “Light Tactical” model instead.

Don’t get me wrong, the stock is solid and more than serves its purpose, but for me – and I’m willing to bet many others as well – a little extra in the cheek weld position would have been welcomed.

The other issue where I thought Remington dropped the ball: the lack of a detachable magazine. Badger Ordnance makes bottom metal to accept the world-renown AI magazines. The AI magazines are damn-near bomb proof and are the yardstick by which all other magazines are judged. Another quality aftermarket manufacturer: Wyatt’s Outdoors, manufacturer of the “DetMag.” Les Baer chose Wyatt’s for their custom tactical rifles.

One of the items that I didn’t mention: a larger bolt knob. Why? Well, because I didn’t know I wanted one! I recently picked up a Savage 10 BAS-K rifle for testing. I’m amazed at how nice a larger knob makes manipulating the bolt – particularly left-handed shooters like me who shoot right-handed rifles.

So I looked around and settled on the Badger Ordnance bolt knob. I was originally going to place my order with Brownell’s for the Tactical Bolt Knob and then send it to Phoenix Custom Rifles here in town to have the bolt modified. After visiting the Badger Ordnance site to verify the part number was correct, I saw that Badger will also install the knob and decided that there was no one better to install a Badger bolt knob than Badger.

I downloaded the form and packed up the bolt for shipment in an insured USPS small flat-rate box and sent it to Missouri. Badger says that the turn-around time is 5 to 7 days after they receive the bolt. . . Since I just started reloading .308 Win ammo, I had enough case prep work to keep me busy for a week or so. Before I even had the chance to call them and see if they had received my bolt, I saw the charge come through on my debit card.

The next day, the bolt arrived via the Big Brown Truck. According to the USPS website, Badger Ordnance received the bolt on a Monday and I had it back in my hand the following Tuesday, for a total turn-around time of 6-days – not too shabby. I inspected the bolt and everything looked great. The new bolt knob doesn’t shorten the bolt handle, so there should be no interference with most (if not all) stocks – OEM or aftermarket. I was worried that there wouldn’t be much clearance with the new knob and the scope. Even with a fairly large Trijicon Accupoint, there’s plenty of room.

Bolt manipulation is now extremely easy. So easy, in fact, that it can be done with just my pointer-finger. The knob does stick out a bit further than the smaller OEM ball, so it may not be appropriate for hunting or dragging through the woods. Then again, a 26” barrel, 50mm objective scope with tactical turrets, and a detachable magazine doesn’t exactly scream tree-stand hunter. 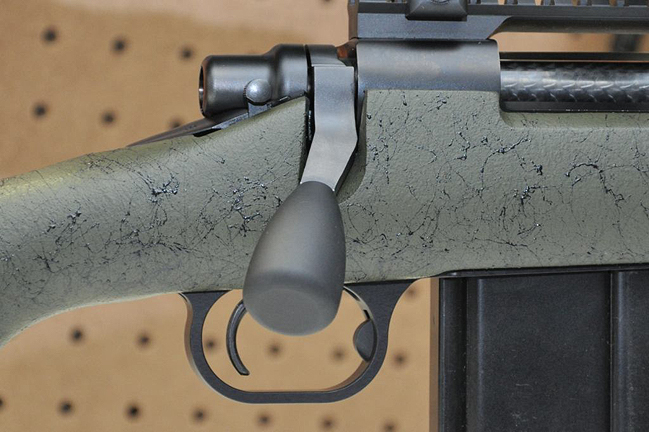 I must admit, I usually filed “tactical bolt knob” in the same category as those Chinese-made scopes with the built-in light and laser on top – worthless. I’m glad I changed my mind, at least on the bolt knob. So far, it has proven to be $98 well spent ($30 for the knob, $68 for installation and shipping).

For those so inclined, you can purchase the knob from retailers such as Brownells, Midway, etc. and install it yourself. There is even a nice “DIY How To” on the 700Rifle.com website. Since I didn’t have the necessary die, spending the $15 on one wasn’t worth it to me. Add to that the $8 savings by ordering it directly from Badger and it just made sense for me to send it in.

– Cost ($98) with the install is almost 1/5th the purchase price of a Remington SPS!
– Maybe a bit too big for stalking/tree-stand hunters (although it is easier to open with gloved hands).
– Only one style of knob to choose from.