Austin Knudsen submitted a nice piece recently on five handguns he couldn’t live without. Me, I’m more pragmatic. Any handgun that goes bang every time, and shoots to minute-of-bad guy accuracy works for me. Much as I prefer concealable guns with good triggers and higher capacity, any gun that’s carried beats the perfect gun left at home.

Not surprisingly, I’ve run across a complete lemon or two in my time. Also, other guns have zero practical appeal to me. Several, actually. Herein lies a list of five handguns I can – and do – live without. You might want to do the same. 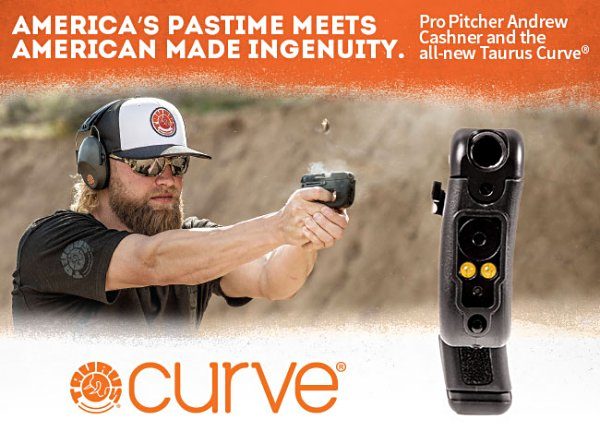 Guns and Ammo initially gushed over this offering from Taurus. A shock, I know. Meanwhile, I rather crudely dubbed it the Taurus Turd right out of the gate when I called out G&A‘s gushing promo piece. In response, they threatened to sue us. That threat sort of blew up in their face (Streisand Effect). In the end, calmer heads at G&A‘s publishers prevailed.

Since its introduction, the Curve has pretty much gone the way of the Studebaker. I got my hands on one brought by a student. In my experience, it shot okay for a gun without sights. In contrast, the person who brought it struggled with it. He never could have hit the Sasquatch-sized B-27 target enough times to qualify for a CCW using that gun.

You read that right, the Curve has no sights. Just like using birdshot in your home defense shotgun works at three feet or less, so too does a sightless pistol. But what if the bad person presses their attack from across the room? Taurus touts the gun’s (anemic) flashlight and laser as sighting tools.

A person with evil in their heart can cover 21 feet in well under 1.5 seconds. Knowing that, how long does it take them to cover 12 feet? “Not very frickin’ long” stands as an acceptable scientific answer.

An a perfect world, a user would identify a deadly threat, activate the laser, bring the gun on target and fire before the bad actor reaches them. But we’re not all operators and stress makes people — especially untrained or inexperienced people — freeze or perform less than ideally.

The sightless Curve seems as though made to facilitate employment for trial lawyers. I bought a new Hi-Point 9mm pistol about 25 years ago for $89. How could I go wrong? I giddily waited the requisite three days to pick it up (may God curse Illinois’ silly waiting period law).

Looking my new gun over, I soon started to question my sanity for trading most of a perfectly good C-note for this hunk of cast iron. It felt like a brick-shaped boat anchor. Oh well, if it worked, I’d be fine.

Then I got to the range. Shooting it proved… frustrating.  While I shot well enough with my Beretta 92, I struggled stay on a letter-sized piece of paper with the Hi-Point. At 12 feet. When it fired.

Malfunctions of every sort plagued me. As an added bonus, those times it did fire and I hit the paper, the rounds often key-holed. “Added stopping power!” I thought in my effort to remain positive.

Fifty rounds later, I surrendered. A week later, I sold it to a co-worker’s friend’s mom for $100. Feeling dirty, I gave her a box of ammo to assuage my guilt.

A few years ago, Benjamin T. Shotzberger wrote a laugh-out-loud funny review of his experience with the C9 here at TTAG.  An excerpt:

The Hi-Point C9 ships with a rear Ghost-ring sight. Too bad that extra bit of plastic wasn’t added to the nearly-impossible-to-operate-from-a-firing-grip safety. Hi-Point calls it the “quick on/off thumb safety.” Operating the switch is about as fast as a herd of turtles stampeding through peanut butter uphill. In January.

Tim over at GunNuts Media published his experience firing 2200 rounds through the Hi-Point C9. His findings? A stoppage or malfunction every 28 rounds on average. They must have improved the gun dramatically since I bought mine.

Anecdotally, I had one family come to a concealed carry class. Dad brought three tricked out Hi-Point pistols. While some had compensators, others had lasers and other accessories I didn’t even know Hi-Point made. “I got all of these for less than you paid for your Beretta,” he boasted. Curious, I asked him about reliability. “Never had a problem,” he says.

By the afternoon, his entire family had ditched those malfunction-prone guns for our loaner guns. The same guy came up to me Sunday morning to tell me, “Your Beretta shoots pretty nice.” Yeah, I replied, you should try the GLOCKs. Many gun aficionados quickly became excited at Remington’s modern take on the old Remington Model 51. One, a prodigious collector and member of Guns Save Life, got an early one. He shot it and then invited me out to try it with him.

The slide bit me on the first shot. I adjusted my grip. From there, it delivered good accuracy while punishing my hand and inducing a flinch. Some pistols do that.

Reading some reviews of the gun left me scratching my head. Those gents must have stouter hands than I. Then I read Nick’s review and thought it not only honest but brilliant. He identified all the problems I found in my limited experience and a whole lot more. While Nick took a lot of heat initially for his review, in the end he prevailed.

I recently won a R51 Gen 2. While I have yet to take it out and shoot it, I have high hopes for it. A .45-70 Derringer: just what every man needs, right? The base model American Derringer M-4 retails for about $780. Not only does it weigh almost as much as a loaded GLOCK 19, it only holds two rounds.

The owner of Rock Creek Arms in Dawson, Illinois brought one to show off at a recent Guns Save Life meeting. Norm had it on consignment after the original owner decided to sell it. “He said it’s been shot twice,” Norm said, laughing jovially. With great love, Norm told me I was welcome to come out and shoot it.

The fine folks at American Derringer market the gun as the a bear-stopper. Given a choice between being mauled by a Grizzly and pulling the trigger on a .45-70 derringer, I’d have to think about it. On one hand, the pain would last longer if I fired. On the other hand, if the shot proved ineffective (or I flinched and missed), I would probably scream in pain like a little girl as the bear killed me.

The smart fellow spends half that on a Ruger LCP-II .380 pocket pistol as a last-ditch bear defender. How does a .380 stop a bear, you ask? Easy. You shoot the other guy in the legs a few times then run like hell. I wrote about my skepticism of .410 revolvers here not long ago. As novelty guns? Maybe. For self-defense? For the size and heft, other options prove much better choices unless the threats you expect to face slither on the ground and have venomous fangs. And no, I’m not referring to lawyers.

These enormous wheelguns look like hand cannons. However, when loaded with .410 shot shells they pack the horsepower of a .38 Special…or less. Obviously, the .45 Long Colt makes a better self-defense round but most users become enamored with the shotgun rounds.

In my experience, they make great slayers of tall weeds. But a machete does the same thing a lot quieter and more cost effectively.

Yes, the Taurus Judge and Smith & Wesson Governor families will work for self-defense. And a Coleman lantern will provide some light in a dark room, but that doesn’t mean there aren’t better options.

While RF gave the Governor four stars way back when, his final line spoke volumes: Kinda like the world’s most fire-retardant paper hat.

In conclusion, while almost all guns can be used for personal defense and recreational shooting, some perform better than others. Better to read and learn from others’ mistakes, than to experience those mistakes the hard way, as so many of us have.