Back in the day, television was heavily censored. Even married TV couples had to sleep in separate beds (Luuucyy!). But characters could shoot at each other with reckless abandon, if the spirit moved them. And move them, it did.

There was a fair amount of gunplay in old television shows. Westerns were big, with at least one climactic gun battle each week — usually more — to keep things interesting.

Some of the more action-packed programs were based upon World War II. The most popular were westerns. Whatever the show or time period, the basic recipe was usually the same; somebody who’s bad was going to get ventilated.

That said, the early TV programs were still subject to strict violent image restrictions. The Powers That Be™ prohibited graphic depictions of real physical damage. The bad guys grimaced, grabbed their stomach and fell down dead with their eyes closed when they were hit. Most of us young ‘uns grew up believing that a gunshot wound was little more than a scratch.

However real or unreal the depictions, the TV shows we grew up with had a profound effect on us, on how we enjoyed entertainment, and on our love and appreciation for firearms. Here are five famous weapons from TV’s “Golden Age” that most of us of a certain age still can’t forget.

1) One of the most interesting weapons on TV was The Rifleman’s modified Winchester Model 1892 rifle. The lever action rifle had a rapid-fire custom trigger release that allowed Lucas McCain to shoot almost Miculek-fast and ask questions later. It also meant that fans rarely missed the intense opening sequence as the rangy hero moved forward behind a spray of bullets.

2) Josh Randall in the western series ‘Wanted Dead or Alive’ also owned a modified Winchester rifle. Steve McQueen, with his mare’s leg, played the lead, bringing an icy coolness to cowboys, a bunch who were already plenty damn frigid. Randall wore the shortened Winchester a leg holster. He was able to draw the weapon as quickly as any fast gun with a pistol and he looked while cool doing it. (Did I mention that already?) He even wore larger caliber .44-70 bullets on his gun-belt, even though his rifle was chambered for smaller caliber .44-40 bullets. 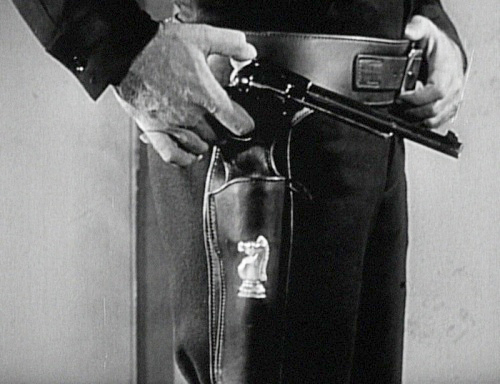 3) Paladin from ‘Have Gun Will Travel’ was a master of many weapons. His primary piece was a western favorite, the Colt .45 handgun. The opening sequence had the viewer staring down the barrel of his gun.

Paladin also carried a saddle-holstered Winchester lever-action rifle on his horse. He was an expert marksman with his trusty weapons. To add an element of concealed lethal surprise to his arsenal, Paladin sometimes packed a Remington derringer in his belt, just for good measure.

4) ‘Gunsmoke‘s’ Marshal Matt Dillon was a big man who worked hard to keep the peace in wild and wooly Dodge City. The marshal could settle disputes with his fists or with his Model 1873 Colt .45 single action handgun.

The actual TV prop was a real Colt manufactured in 1895, so Matt was essentially period correct. The opening sequence was originally a showdown in the streets of Dodge — at high noon, no doubt — in which some idiot tested Matt’s draw. Bad idea. 5) The final TV show up for discussion is ‘The Rat Patrol’ because nothing says WWII fun quite like a Jeep-mounted Browning M2 mowing down Nazis.

In the show’s opening sequence, a steely-eyed Christopher George spots a passing German column in the North African desert and our heroes spring into action. The shootouts and scenes of Jeeps racing around and over the dunes, getting air while the gunner hangs on and blazes away at enemy forces was mighty impressive for young viewers in the late 1960s.

It was a bygone era that was anything but politically correct, one in which men were men and the firearms were as important as the actors.