While the wicked preyed upon innocents in a horrific attack in Las Vegas, brave American sheepdogs showed their nation our very best. The very next day, in a striking contrast to the bravery and courage under fire from Las Vegas, social justice “warriors” in the NFL flipped America off.

People tend to freeze during an attack, when the unthinkable happens. For some, beginning to move happens quickly, while others will remain paralyzed by fear.

Sheepdogs on that field in Las Vegas selflessly stepped up to help their fellow Americans in time of need. These courageous men and women helped others move to safety, preventing further injuries. While bullets ricocheted off the ground, these sheepdogs moved the wounded out of the line of fire and tried to stop the bleeding, saving lives.

One man ran while carrying a 20-year-old cancer patient who was too weak to walk, much less run. That brave man’s fiancee guided the cancer patient’s mother. Recall the picture of a man atop a wounded woman. He helped her to safety, then went back and saved another person’s life using his belt as a tourniquet as bullets hit flesh and pavement around him. Later, he stuck his finger into the bullet wound of a third person to save another life. Another hero rescued as many as 30 of the wounded before he too was shot in the neck. At that point, another sheepdog rescued him.

One man “borrowed” a pickup truck, loaded it with wounded and drove to a nearby hospital. He then returned with the stolen truck for a second load.

Other men died shielding their wives.

And the truth is that, as seen in places like Houston and Florida after natural disasters, America has no shortage of these courageous men and women.

Unfortunately, in a nation of over 300 million, we can’t all be heroes.

The very next day, instead of coming together as America mourned, well-paid NFL players continued their protests against our flag, our soldiers, and our nation during our national anthem. In fact, at least one player literally showed his ass to the flag during the anthem on Monday Night Football. 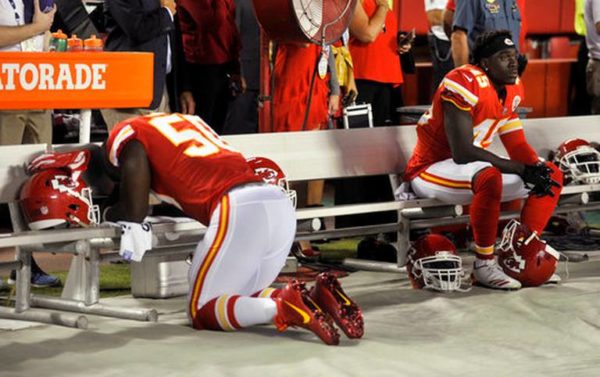 Make no mistake, everyday Americans have noticed these antics. Angry fans continue to burn their NFL licensed gear.   Millions of Americans have tuned out the NFL, once America’s most popular professional sport, as evidenced by an increasing number of empty seats and plummeting ratings.

Soon, if the trend continues, the NFL will stand for “No Fans Left”. Frankly, it couldn’t come soon enough.