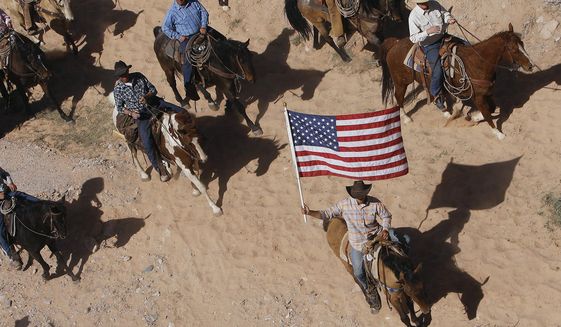 I once found a gem buried deep within the comments pages of a Washington Post anti-gun agitprop article. The trolls were hard at work churning out their vitriolic hyperbole, hoping to slay each other, wielding their ad hominem swords. As usual, seventy-five percent of the pro-2A crowd was providing thoughtful argument supported by statistics and appeals to principles. The libertarian sympathies of the gun rights crowd’s core were evident, and when someone dared point that out, a certain liberal troll quipped, “Libertarians=Anarchists in Dockers.” That comment, as inaccurate as it may be (I happened to be wearing Patagonia Rock Crafts pants at the time) forced me to ask myself . . .

“How does the broader public perceive gun owners, and how is our message interpreted?” I fear that the pro-2A movement is somewhat hamstrung by associations with the far right, anarchism, and violence. Indeed, we are painted as violent “gun nuts” who, motivated by bloodlust, seek out violent confrontation, believe the government is our enemy, and that all hope to someday relive our apotheosis at Ruby Ridge.

When politicians like Joni Ernst say things like, “I do believe in the right to carry, and I believe in the right to defend myself and my family — whether it’s from an intruder, or whether it’s from the government, should they decide that my rights are no longer important,” liberals get antsy. Kirstin Powers’ response to Ernst’s statement highlights my concerns more accurately than Jerry Miculek can shoot a 9mm at 400 meters. She asked, “WHO from the US govt would Joni Ernst shoot?? Be specific. A member of the military? A police officer?” While I agree with Ernst on principle, her message is not only easily misconstrued, but IS dangerous without further qualification. Here’s why.

First, we get linked to actual nut jobs. Just over the past three years, we have seen quite a few cop-killing psychopaths murder police officers in the line of duty. These were not efforts to escape justice, or reprisals for drug war-related vendettas, but targeted, premeditated, and ideologically inspired shootings. Eric Frein’s cowardly murder of Pennsylvania officers follows a string of similar shootings including, but not limited to William Spengler, Christopher Dorner, and Jerad and Amanda Miller.

In each of these cases, we are talking about people who are clearly mentally unstable, and I am in no way saying that the pro-2A movement is somehow responsible for their actions, but we have to understand that people like Bill Cope do. You see, like it or not, we have a responsibility to articulate our message in a way that doesn’t feed the delusional savior complexes of the John Wilkes Booths of the world, or virulent cynicism of the blogosphere’s liberal pundits (read Salon, Mother Jones, and Huffpo). When we have people like Dutchman6 over at the Sipsey Street Irregulars posting things like “Gentlemen, prepare to defend yourselves,” and essentially calling for civil war in the un-Constitutional State, or when James Yeager threatens to “start shooting people,” it may actually be time for some introspection.

We often talk about the right to resist a tyrannical government using weapons, about “Nazi, jackbooted thugs” at the ATF, about how lovely the wound cavity of a .40 S&W Federal HST seems compared to an FMJ. But we must be mindful of how our rhetoric is interpreted, not just by MDA, but by the Eric Freins among us, or even the Christopher Dorners on the left. Thus, it is imperative that we answer Ms. Powers’ question, and do so in a way that clearly articulates the “hows,” “whys,” and “whens” of the protection of our Second Amendment rights.

So when is enough indeed enough? When is it appropriate for Americans, armed with an AR-15 and a sense of duty, to “shoot people?” Two short anecdotes help answer that question; the American and French Revolutions. In the first case, Americans were armed, organized, and prepared – albeit in a somewhat inferior manner – for the use of force. When the British army came to confiscate their weapons, the minutemen reacted defensively and in concert. When they fired the “shot heard round the world” they did it under the supervision of militia commanders, provoked by direct British aggression, and were accountable to a colonial government and a nascent Continental Congress. Certainly, the proliferation of arms among the population presented its challenges. The American Revolution was as much a civil war as it was a rebellion, but the Revolution endured in large part due to its fundamental populism and relatively strong political institutions that predated hostilities.

The French Revolution was entirely different. The people were deprived of arms from the start, so mobs of Parisians stormed the Bastille and the Hôtel des Invalides in order to resist the anticipated crackdown by loyalist troops and foreign mercenaries. Yet the Republic feared its own as much if not more than its enemies. The violence that characterized the Reign of Terror included mass conscription, and the disarming and murder of anyone opposed to the regime, and the trampling of the very essence of liberté, égalité, fraternité. Ultimately, the French Revolution devolved into tyranny, and a series of violent uprisings that would last a half century.

In the end, Americans acted not as an angry mob, but in a highly ordered and coherent way when compared to the mob rule of the early days of the French Revolution. This luxury was only possible because the people possessed the means to resist prior to the moment of conflict. The same must be true today.

Bearing this in mind, we advocates of the Second Amendment’s role as a check against tyranny must remember to clearly state the context in which this right exists. The following three questions offer a test for the validity of Second Amendment invocation:

1. Have I exhausted all legal, personal, and societal means to affect change?
Indeed, this is not the case in America. We still have the courts, although they can be unreliable of late. Likewise, public opinion trends ever more pro-gun. While states like New York, Connecticut, California, and New Jersey are suffering under very real infringement, we have yet to have the door slammed shut by either the legislature or the courts. Redress of our grievances is far from being totally discounted.

2. Are my actions accountable to a higher authority?
Shooting a police officer or BLM agent who is not threatening you is murder. Our founders did not attack the British in their barracks or on the parade ground, but only when the redcoats in Concord were armed and obviously marching to do them harm. Had an American preempted this by shooting and killing a British soldier of his own accord, I am confident that John Adams would have made sure that he receive a speedy and fair trial…followed by summary execution. Any violence must be committed with the oversight and accountability of the rule of law. To act outside it is to bring shame upon the very cause one may be seeking to advance. No one can or should be judge, jury and executioner.

3. Is my action defensive or offensive? Does the individual or group upon whom I am considering violently acting represent a grave and existential threat to my life, liberty or property, and does that threat merit or justify the taking of human life?
The beauty of the first two tests is that they will inform the third. Violence MUST be a last recourse, and it must be accountable to a higher authority. In the event that, someday, Americans may have to rise up in arms against tyranny at home, their rebellion must be directed at specific, clearly delineated, and solvable problems, and the action must be taken in harmony with the principles of freedom, justice, and the inordinate value we place on human life. Thus, a revolution MUST maintain the moral high ground to succeed.

Human life is precious and sacred. To take a life is a grave act due the most intense scrutiny and oversight. We, as the “armed intelligentsia” have a duty to articulate our position in a way that doesn’t undermine our cause. Freedom lovers are not “anarchists in Dockers.” We don’t want bloodshed, nor would we glory in it. No one wants a second Civil War to live out our neo-Confederate fantasies. We only condone violence as a last resort, when all legal means are exhausted, when government has ceased to be legitimate and a new authority must be put in its place. The end is not justice through bloodletting, but freedom through regime change. As Thomas Jefferson so eloquently stated in the first of our great founding documents,

Prudence, indeed, will dictate that Governments long established should not be changed for light and transient causes; and accordingly all experience hath shewn, that mankind are more disposed to suffer, while evils are sufferable, than to right themselves by abolishing the forms to which they are accustomed. But when a long train of abuses and usurpations, pursuing invariably the same Object evinces a design to reduce them under absolute Despotism, it is their right, it is their duty, to throw off such Government, and to provide new Guards for their future security.

So no Ms. Powers, while I am unable to speak for Joni Ernst, I will not be shooting anyone. I haven’t yet made it beyond step one. And if I do, will Dockers qualify as tactical pants?