In October 2019, a very interesting paper was published regarding mass public shootings in the United States by the Rockefeller Institute of Government titled Deconstructing Mass Public Shootings.

From the paper’s abstract:

It appears to be a scholarly attempt to rationalize more gun people control. Without a whole lot of interest, I idly skimmed over it, thinking maybe I’d do a full-scale fisking.

Then this tidbit virtually leapt off the page and grabbed me by the eyeballs. 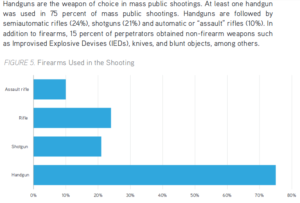 Handguns are the weapon of choice in mass public shootings. At least one handgun was used in 75 percent of mass public shootings. Handguns are followed by semiautomatic rifles (24%), shotguns (21%) and automatic or “assault” rifles (10%). In addition to firearms, 15 percent of perpetrators obtained non-firearm weapons such as Improvised Explosive Devises (IEDs), knives, and blunt objects, among others.

They claim to have found that 10% of 318 mass public shootings during the time period were committed with automatic weapons: 31 to 32 shootings depending on how they rounded the decimal place.

I found that number astonishing. As of the publication date of their paper, I had documented fewer than five criminals uses of machine guns as defined in 26 U.S. Code § 5845(b) since passage of the National Firearms Act of 1934. And none of those uses were mass public shootings as defined by Capellan and Jiao (“the killing of four or more individuals in one or more closely related locations within a 24-hour period”).

In hopes of updating my machine gun information, I asked the authors for their source data for the “automatic or ‘assault’ rifle” shootings. After two and a half weeks of reaching out to the Rockefeller Institute of Government, Rowan University, and the authors, lead author Capellan finally responded and promised to have the data sent to me.

That was five weeks ago. The data was never sent, and Capellan does not answer emails. Thus, I do not know what the alleged incidents were; when, where, who, nor the actual type of weapon.

I can, however, speculate.

My first thought was that they encountered news accounts of weapons reported as “MAC-10,” “AR-15,” or “AK-47” and mistook them for automatic weapons. If such were the case, a review of their data would have revealed it and I could quietly inform the authors so that they could quite professionally retract and revise their paper.

But the time-frame — 1966-2017 — they use for their study is interesting, as is the number of shootings they say they found.

Their first footnote is “Public Mass Shooters and Firearms: A Cross-National Study of 171 Countries,” Lankford, 2016“, which also found mass shootings starting in 1966, and up to 2012. Lankford found 292.

I suspect Capellan and Jiao used Lankford’s list, and updated for US shootings up to 2017. I see that as a possibility because Lankford’s 292 mass shootings over a 46-year period is an average of 6.35 shootings per year. Adding in the additional five years, at the same rate, of Capellan’s and Jiao’s study period would be 323.7 shootings; that’s only a few more than the number they claim: 318.

If they did so, that’s a rather large problem. Lankford’s now debunked list of found 292 shootings worldwide, not just the United States. Only 91 of Lankford’s mass shootings during the period took place in the US.

Capellan’s and Jiao cite Lankford for their numbers; but if they only used his 91 US shootings, then they somehow found 227 mass shootings took place in the next five years; an average of 45.4 per year.

Time Magazine found a small fraction of that number for the 2013-2017 period — 33 total — and average of 6.6 per year (note the similarity to Lankford’s 6.35 average). That includes shootings which would be excluded by the Capellan and Jiao definition, which yields a total of 21, averaging 4.2 per year.

Without being able to see the Capellan and Jiao data, it very much seems as though they mistakenly used Lankford’s complete worldwide mass shooting list.

If this is the case, it could also explain how they may have found actual machine gun shootings. Lankford’s data includes shootings committed by foreign military personnel, an example being the Rwandan soldier who went on a rampage in 1995 killing 14 people and wounding another 19. But you might expect the authors to notice that was in Rwanda and not the United States.

Perhaps someday Capellan will provide the promised data and I will know for sure. Perhaps it will prove accurate, and my knowledge on the topic (and my list) will be expanded.

While this is not a complete deconstruction of the paper, there’s one more thing about the mass shooting weapons used in the study that’s notable.

They mention handguns, semiautomatic rifles, shotguns, and assault rifles. But what of other types of rifles, such as the bolt-action Remington 700 ADL used by the 1966 University of Texas tower shooter? Or the 1974 Olean High School shooting? The 2006 West Nickel Mines School shooting with a Ruger M77 bolt-action? And the Winchester lever-action rifle used in the Skagit County shooting spree?

Did Capellan and Jiao take the time to note the use of non-firearm weapons (IEDs, knives, etc.), but somehow omit bolt and lever guns?

In truth, while I was primarily hoping to see the machine gun list, I really think all of their data needs to be vetted.

(This article first appeared at The Zelman Partisans. Reprinted with permission.)