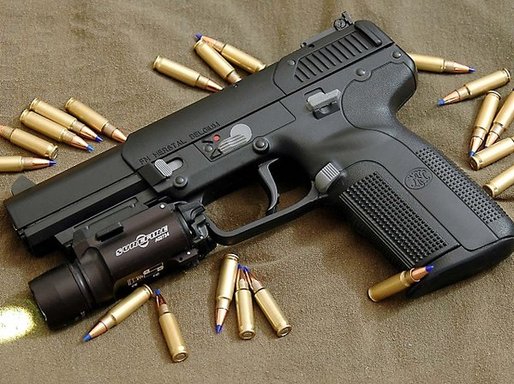 Ah, political grandstanding. Where would we be without it? More specifically, where would the civilian disarmament movement be without pandering to people’s irrational fears? [NB: The NRA’s alarmism is based on rational thinking, mostly.] One of the gun grabbers’ key tenets of terror: some firearms are WAY too dangerous for civilians. Machine guns? Certainly. (Providing you forget the fact that police are civlians, too). “Assault rifles”? Most definitely. (Providing you forget the fact that tens of millions of Americans own them without incident.) And handguns. Admit guys, you want to ban handguns. Some handguns more than others, apparently . . .

politix.topix.com reports that NY Rep. Eliott Engel has introduced legislation to ban “Five-seveN” handguns, which the website describes as “pistols capable of killing a police officer wearing a bullet-proof vest from over 200 meters away.”

According to Engel, several types of ammunition for the Five-seveN have the ability to pierce law enforcement body armor. The Five-seveN handgun is one of the most popular with Mexican Drug Trafficking Organizations who have nicknamed the gun the “mata policia” or “cop killer.”

Wait. Didn’t Engel already fight and lose this battle back in the day? Yes. Yes he did. Sherman set the Wikipedia Wayback Machine for 2005.

That’s when The Brady Campaign to Prevent Gun Violence labeled the Five-seveN a “cop killer” and called for its ban. Rep. Engel responded with H.R. 1136: PLEA Act. Even though Senator Lautenberg championed a Five-seveN ban in the Senate the push to rid America of FN’s partially plastic pistol failed.

In March 2007, Engel tried again, under the new designation H.R. 1784: PLEA Act. That didn’t fly either, although our elected representatives managed to ban civilian (non-law enforcement) sales of the Five-seveN’s hotter supposedly “armor piercing” ammo. Even though some pistol and most rifle rounds are far heavier and more powerful.

Engel tried to ban the FN again after the Islamofascist Fort Hood shooter used a Five-seveN to murder 13 people and injure 30 more. “In July 2010, legislation was introduced in the United States Congress by Rep. Engel, for a third time, under the new designation H.R. 6030: PLEA Act.” Again, no sale.

By now the career taxpayer-tit-sucker’s fed-up with that whole democratic process. In addition to banning his pet peeve through legislative recycling Engel wants the Prez to [once again] exercise his Executive Powers to git ‘er done, “assault rifles”-wise. His statement on the subject:

In addition to banning this weapon, which is designed to kill, especially our brave police officers, we have other means to stop the violence. I again call for the president to reinstate the ban on imports of assault weapons, a ban enforced during the administrations of Presidents George H.W. Bush and Bill Clinton. This is something he can do immediately by executive order, while Congress works on other measures to limit gun violence and increase measures to treat the mentally ill.

Isn’t one of the definitions of a mentally ill person someone who keeps doing the same thing expecting different results? Just sayin’.