The long, difficult saga of Colt’s Manufacturing has taken another turn. Firearms distributer RSR Group has sent an email blast to their retail customers announcing that Colt will no longer produce long guns for the retail market. 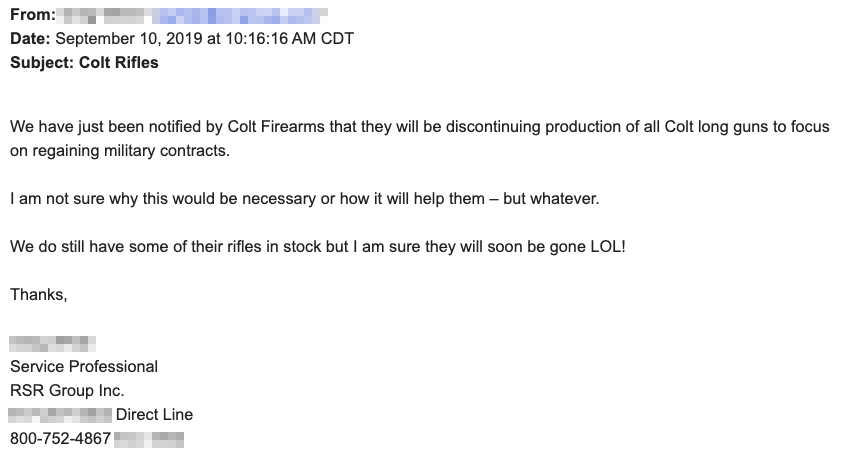 Recall that Colt filed for bankruptcy protection in June of 2015, emerging in January of 2016. We hear that they’ve struggled to make money on their retail long gun sales for a long time. Colt lost its primary military contract for M16 and M4 rifles in 2013. In response to the news, one industry insider told us . . .

They’ve been losing left and right to companies both big and small. They don’t have the high end or the low end market, and they’ve finally realized that the prancing pony isn’t enough for this generation of shooters to buy less rifle for more money. Instead of getting better, they’ve given up.

TTAG has requested a comment from Colt, but has not received a response yet.

UPDATE: TTAG was able to speak directly with Paul Spitale, Senior Vice President of Colt’s commercial business line. He confirmed the above. Colt has halted production of its commercial long guns lines and is focusing its manufacturing and sales on 1911s and revolvers.

He also stressed that Colt has about 110 days of long gun inventory in its distribution network and if market conditions change down the road, they could revisit this decision.

FURTHER UPDATE – 9/19/2019: Colt has issued the following statement on their web site:

Company Response to Questions about Colt Participation in Consumer Markets

WEST HARTFORD, Conn. (September 19th, 2019) – There have been numerous articles recently published about Colt’s participation in the commercial rifle market. Some of these articles have incorrectly stated or implied that Colt is not committed to the consumer market.  We want to assure you that Colt is committed to the Second Amendment, highly values its customers and continues to manufacture the world’s finest quality firearms for the consumer market.

On the other hand, our warfighters and law enforcement personnel continue to demand Colt rifles and we are fortunate enough to have been awarded significant military and law enforcement contracts.  Currently, these high-volume contracts are absorbing all of Colt’s manufacturing capacity for rifles.   Colt’s commitment to the consumer markets, however, is unwavering.  We continue to expand our network of dealers across the country and to supply them with expanding lines of the finest quality 1911s and revolvers.

At the end of the day, we believe it is good sense to follow consumer demand and to adjust as market dynamics change. Colt has been a stout supporter of the Second Amendment for over 180 years, remains so, and will continue to provide its customers with the finest quality firearms in the world.

Note that nowhere in our report did we state or imply that Colt lacks commitment to the civilian market. As Mr. Spitale told us when we spoke, demand for Colt’s 1911s and revolvers is strong and the company is focusing its production on those lines.

We simply reported that the company has halted production of civilian market long guns, a fact that Mr. Veilleux (and Mr. Spitale before him) has confirmed. We stand by our report.