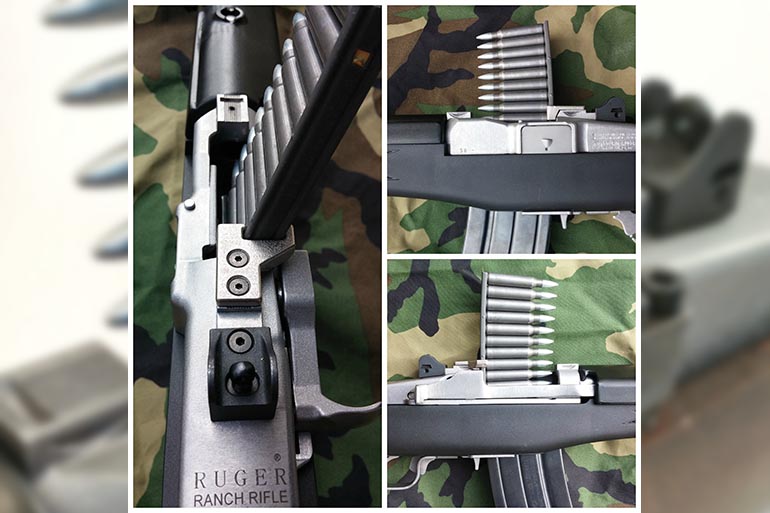 You may have read Josh’s recent review of the venerable Ruger Mini Thirty. Josh noted that despite the Mini Thirty’s (and Mini-14’s) Garand-style action, it’s not loadable with stripper clips like its famous forbear did with en bloc clips.

Josh was correct. You can’t reload a Mini with a clip. At least not a factory rifle. But our review got the attention of the folks at Cogburn Arsenal who let us know that they make aftermarket stripper clip guides for the Mini-14 and Mini Thirty. How cool is that? They offer a couple of different configurations depending on whether your Mini has been factory drilled and tapped for a scope mount or not (early models weren’t). As you can tell from a couple of the photos above, you have to insert the clips at an angle to get around the extractor. But Cogburn says it just takes a little practice to get good and fast at it.

Why would you want to load your Mini with stripper clips instead of magazines?

But if that wasn’t enough for you, Cogburn provides a few reasons of their own:

Many times when I see the idea of stripper clip loading proposed, usually someone quickly asks “but why?”

For a lot of people, the sight of stripper clip loading is self-explanatory. If this is you, feel free to read no further. For other people, they look at stripper clips as an inferior and out dated loading method. In all honesty, they are correct. It’s slower and more finicky than changing a magazine. People take that correct view and go one step farther and think something that is inferior and out dated doesn’t have a place. That’s where I disagree.

Reason 1) Stripper clips prove their worth as a supplementary loading method. They don’t replace magazines, they supplement magazines. There generally a finite number of magazines in any given situation. Proprietary Mini-14 and Mini Thirty magazines cost significant amounts of money.

The U.S. military still employs this method, although they issue a spoon to load the magazines directly. These spoons are available for the Mini-14 and I encourage their use. Keep in mind no such product exists for the Mini Thirty (yet). I don’t see a good reason why someone should complain about stripper clip guides attached to a rifle but not the little spoons currently still issued to U.S military personnel for resupply. It’s the same thought process for both.

Reason 2) Shooting with outdated technology is more fun than you’d think. I point to the continued popularity of lever actions, revolvers, and black powder for proof. When you can envision what it was like for a Viet Cong soldier using a Chinese made Type 56 SKS against the French in a jungle, it enriches the shooting community with some history. I think we can all embrace a little novelty into shooting.

Not every item in your safe needs to be for the protection of your life. There are a lot of people not interested in shooting for fun, but that’s okay. If that’s you, no problem, but it’s also okay to let others have our fun. Keep in mind, it has never been recommended by us that you use a stripper clip to reload your rifle while being shot at, unless that’s your only means of reloading.

Reason 3) Gadgety things captivate me and make my soul hum. I know others feel the same deep pull. I’m fascinated by adapting things together that normally have no business together. There is no foreseeable end for the tinkering with my rifles.

I need to re-zero my rifle on every range visit because I’ve changed so much that I can’t trust the zero anymore. It’s a real problem, but it’s not one that will stop in the near future. Let us tinker. Sooner or later we’ll come up with something you really like. There are things in the works that we think more people will like, so keep that in mind.

Reason 4) Gun laws and legal restrictions determine new sets of requirements for others. I commonly hear “just move” like it’s a simple concept to leave family and friend networks. Our products weren’t specifically built for this purpose, but I absolutely understand the demand for more loading options in several restrictive U.S. states.

They even make clip spoons if you want to load your mags with stripper clips.

We haven’t tried these yet, but it isn’t rocket science. We’ll try to get our hands on one and give it a go.