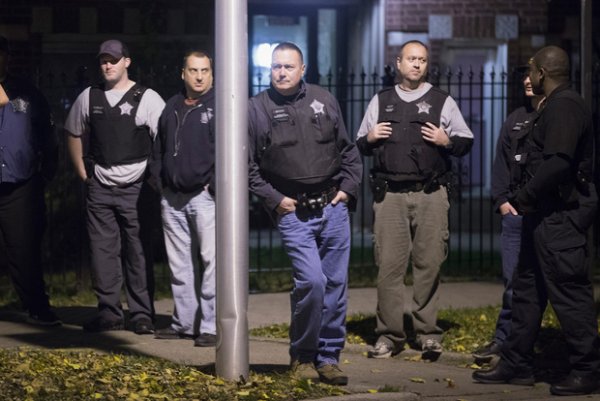 NBC’s Chicago P.D. television show draws lots of viewers each week (for a network series, anyway). Like just about every other cop show, detectives and beat cops work together, in the Windy City, of course, to solve homicides. Every week the brave good guys and gals get their man, or woman. Yet here in the real world . . .

Chicago’s streets run red with the blood — just like on the TV show. In fact, Murder City USA saw 812 homicide victims and thousands more wounded in 2016.

Unfortunately, real-world cops identified suspects in just 20 percent of those homicides. Keep in mind cops didn’t arrest and convict suspects in all those cases. They merely fingered a suspect.

This year, Chicago’s finest have suspects in barely 10 percent of homicides in the first two months. That number plummets to an anemic 6.1 percent if one factors out the police-involved fatal shootings and the lone justifiable homicide so far this year.

Even when police manage to ID suspects, the Cook County State’s Attorney’s office doesn’t always prosecute them. In 2012, 94 percent of non-fatal shootings saw no prosecution. Why? Because the SA’s office wants cops to find an eye-witness willing to testify.

Residents tend to keep quiet, unwilling to risk their lives to testify against dangerous criminals. Police offers of protection in the form of some cash to move to another neighborhood mean little.

People know gangs in Chicago enforce the “no snitch” culture. One witness took such a deal to testify in a high profile case in 2012. She moved to a new neighborhood. The gangs found her. They shot her 20 times, including three rounds to the face. She never made it to the witness stand.

Unsolved and unprosecuted violent crimes contributes to the public’s “no confidence” vote in the criminal justice system. Residents vote with their feet in turning away from helping cops solve crimes. The gangs see this and become further emboldened.

Of course, the cycle just continues to worsen. Innocents get caught up in the crossfire between gang members shooting it out on a regular basis.

How bad is it?  Watch this video of the gunfire, posted by some Chicago cops. Note where they parked to record the mayhem back in early December 2016. There’s a reason we say Chicago is America’s largest open-air shooting range.

Until and unless local residents stand up to the violent gangs and help police root them out of the city, nothing will change.