Every gun in my collection has a purpose. I start with a concept of what I want the gun to do and then I build something that is absolutely perfect for that role. Last year I finished off my ideal 300 AAC Blackout build with a new Noveske upper, but there’s something else I’ve been working on for hunting season that is on the other end of the 30 caliber spectrum. Not only is it quite possibly the perfect hunting rifle for anything under 500 yards, but it’s proof that even an ugly duckling like the SCAR 17 can evolve into a beautiful swan given the right mofications . . . 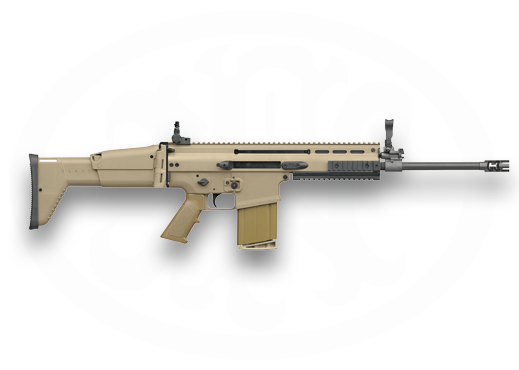 There’s little debate about the aesthetics of the original SCAR series of rifles. It just looks like an absolute trainwreck of function dictating form. That’s great for the military, but it sucks when you’re trying to show off on the range. I decided that in order to perfect this rifle, it needed to be shorter, slimmer, sleeker, and quieter. That meant changing the stock, the handguards, the barrel length (to an NFA regulated 13 inches), and adding a silencer at some point. While the tax stamps were in process I started with the aesthetic changes.

The first thing that any good SCAR owner should do is immediately remove the Ugg boot of a stock and chuck it. Finding the perfect replacement, though, can be a bit of an issue. 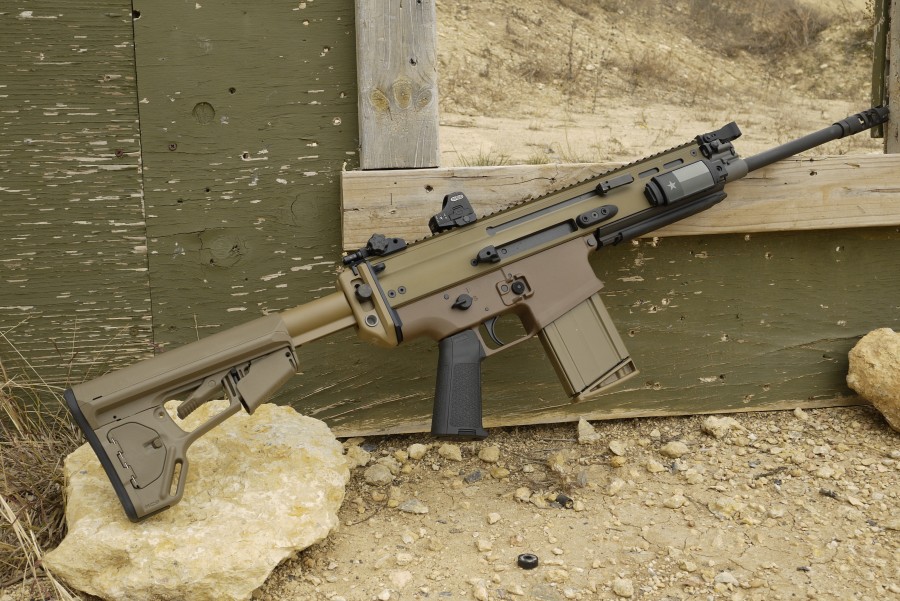 My first attempt at doing something about that stock was with the VLTOR Re-SCAR stock adapter. This handy kit allows you to slap any standard AR-15 stock onto your SCAR, and even allows you to adjust the comb height to fit your body. It was a pretty good solution and the engineering was solid, but the aesthetics were still a bit off. It just didn’t flow with the rest of the gun the way I wanted it to.

In the meantime I also replaced the A2 grip on the gun with something a little more ergonomic. A Magpul MIAD is the go-to grip for my guns and so one was procured for this purpose. While I was noodling with the aesthetics, one of my old friends at MH Machining had been playing with an idea I gave them. I hated the fixed charging handle on the SCAR 16 I used in competition shooting, so I asked a buddy with a CNC machine to design a better folding charging handle that would be less likely to catch on things while shooting, yet provided more surface area to get a grip when I really needed to yank on it.

The original version was great, but one day a package arrived with something even better. He had improved the design to make it even more sturdy and found a way to have the thing be fully ambidextrous. It was genius and I immediately slapped it on my gun. The SCAR’s stock makes it look clunky, but the other reason it looks like a bloated fish are the rail sections on the front of the gun. Instead of looking like the svelte sleek predator it is, the rails make the gun look decidedly bulky, and they interfere with getting a good grip on the gun. There are some extended rail sections out there, but by far the best of these is produced by Kinetic Development Group. KDG’s SCAR MREX Rail slims down the profile of the gun and extends the rails giving the SCAR a more slender appearance while also providing more mounting options for lights and bipods. The KDG MREX Rail is a definite win-win, and while they sent us one to review, (A) it was too long for my 13-inch SBR, and (B) was immediately snapped up by RF for his SCAR 16. So I bought a new shorter rail from KDG in black for my SCAR 17. KDG also had another item which was perfect for my purpose, namely their SAS ACR replacement stock adapter. It filled that position perfectly, almost as if it had been designed for the SCAR series of rifles instead of the ACR. Then again, this is a Magpul design, so the sexiness shouldn’t be a surprise to anyone. The final part I had in mind for the rifle was a silencer. My original plan was to use my AAC 762-SDN-6 for this project, but after AAC helpfully re-cored the can and fixed the worn latch, I never wanted to shoot it ever again. Not because it was bad, but because that was my first silencer and now that it was pretty and pristine again, I wanted to keep it in factory fresh condition. Needing a new can for the gun, I first looked at the Liberty Chaotic. I talked with the guy who designed the can and he confirmed that it would probably be OK for shooting on a 13-inch .308 Winchester rifle despite it being mainly designed for .300 AAC Blackout usage.

It functioned, but it wasn’t perfect. The diameter was a little big for my taste, and while it kept the gun short, it was also a bit of a pain to install and remove. I wanted something with a fast-attach mount that was lighter and thinner, and the Dead Air Armament Sandman S was the perfect tool for the job. I really like the Dead Air team. They’ve done a great job designing their first proper silencer (Mike Papas of SilencerCo fame brought a lot of weight to their engineering efforts), and as a result it not only looks amazing but it works really well.

Their Dead Air Sandman silencer uses a slick fast attach system that makes installation and removal a snap, and the internals turn a barking-loud SBR’ed .308 rifle into a stealthy pussycat. It does a great job and fits aesthetically with the rest of the rifle, so I regret nothing about the pile of cash I slid their way in exchange for it. The final piece of this puzzle is still in flux. For a scope, right now I’ve got the brand new Atibal Velocity 1-4x scope mounted for testing purposes. I like the concept of the scope, but the reticle leaves a lot to be desired. I’m already working with them on trying to develop a reticle to my exact specs for their next run (to be branded an official TTAG-endorsed product if all goes well…I think) so that might be changing soon. The scope caps are covered to prevent them from being accidentally turned, the magnification range is ideal for the distances I’m targeting, and the size is ideal for this kind of gun. I’m digging it, but I really hope its successor stays on my rifle permanently. I’m close. I’m very close. I’ve taken the ugly duckling of the original SCAR and upgraded it to the point where it actually looks like a sexy beast, and at the same time I’ve kept the FN action and accuracy that I loved about my SCAR 16 while I was on their competition team. In this current configuration (with this scope) I’m getting 100 yard groups that I can cover with a quarter and that’s before I’ve even touched the trigger. There’s definitely more to do, but even if I stop here, I’m pretty sure I could be happy.

No, I take that back. It needs to be perfect. Stay tuned. For now, here’s the parts list for everything you see: