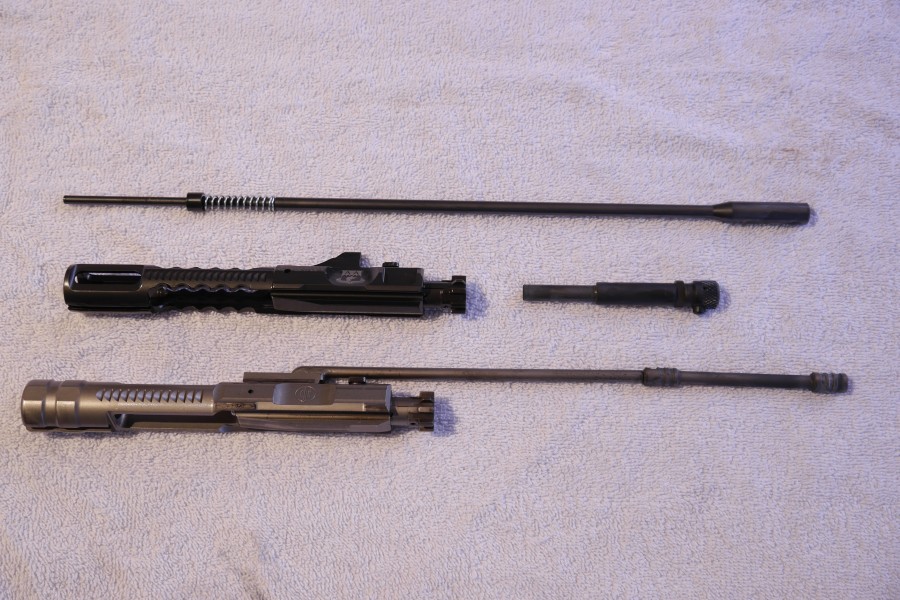 The piston-based operating system has long been the gold standard for firearms design. Sure there are other methods like roller-delayed blowback and Blish lock designs, but nothing really stands up to the simplicity and raw reliability of a piston. Armalite’s AR-15 rifle was originally designed to use a “gas expansion” direct impingement system for operation, but these days more and more people are getting into the piston game. I’ve had a couple people ask me the difference between long and short stroke pistons, and so here’s the long and the short of it . . .

Hiram Maxim is credited with inventing one of the first automatically repeating firearms, his Maxim Machine Gun. The story goes that Maxim was out shooting with some friends and noticed that there was a lot of wasted energy in a recoiling firearm that could better be used operating the action and reloading the gun. That same concept — using recoil to the shooter’s advantage — is the basis for most modern firearms designs.

The trick with using recoil to do the work is figuring out a force delivery mechanism. The most efficient way to capture that excess recoil is by using excess gas from the propellant vented off from the barrel after the bullet is already up to speed, since at that point pulling off the excess energy won’t negatively impact the bullet’s performance. But getting that excess force from the front of the barrel all the way back to the action was problematic. Early attempts used everything from a spring-operated lever such as that on Browning’s early machine gun models to a reciprocating barrel and “recoil booster” that captured the energy from the muzzle, but the best solution was the simplest and cleanest: bore a small hole in the barrel (gas port), and vent the gasses that way. That’s the way almost every semi-auto action gets its energy these days, and piston powered AR-15 rifles are no different.

Once the gasses are vented, in a gas piston AR system it’s the job of a long metal shaft (the “piston”) to move the forces from the vent to the action. The gasses act directly on the front of the piston, forcing it backwards and imparting enough momentum to the bolt carrier to cycle the action. That much is common to all gas piston systems, but the great debate rages on about whether a long stroke or a short stroke gas piston system is best. As for what that means, let me take it one at a time.

A long stroke gas piston is one where the long metal piston is physically attached to the bolt carrier. Examples of long stroke piston systems include the AK-47 rifle, the M1 Garand rifle, and PWS’ line of AR-15 rifles. I’ll use the PWS as the example in this explanation. With the PWS rifle, the piston is welded in place and attached to the bolt carrier. When the gun fires, the  gas pressure acts on the front of that long shaft (you can see the discoloration from those gasses at the front) and those gasses force the piston backwards. The piston and the bolt carrier group (BCG) recoil as-one, traveling the entire length of travel and then returning to the starting point under the hand guard ready to start the whole process again.

The long stroke piston system is the oldest of the piston driven designs, and has the benefit of delivering the most power to the action. Since the piston is simultaneously in contact with the expanding gasses at one end and the bolt carrier at the other, force from the front of the gun can be constantly applied to the bolt carrier throughout the entire reloading cycle. However, usually manufacturers will drill some vent holes in the gas tube that houses the piston to vent those gasses off before the piston stops moving so that there’s nothing impeding the forward motion of the piston when chambering a new round.

While the long stroke piston system works, it isn’t ideal for every situation. The added mass of the piston attached to the bolt carrier slows down the cyclic rate of the gun, and can lead to increased felt recoil. There was a demand for a system that had the same basic concepts, but could be used for much lighter firearms and quicker cyclic rates. The man who first designed such a system was a bootlegging murderer who built his firearms while in prison: David “Carbine” Williams. While the long stroke piston system moves as-one, the short stroke design system has a couple different moving parts. The piston and the bolt carrier are separate moving pieces, and they operate somewhat independently of each other.

When the gun fires, the expanding gasses apply kinetic energy to the piston and force it backwards just like in the long stroke system. Also like the long stroke design, the piston directly acts on the bolt carrier and forces it rearwards as well. That’s where the similarities stop, though. The piston only moves back about an inch or so, imparting all of the required energy in a short period of time, and then it stops. Once the piston stops moving, the bolt carrier continues moving rearwards due to the momentum it still has from that initial shove. That momentum carries the bolt carrier through the rest of the semi-automatic or automatic reloading cycle, and then everything marries up once more when the bolt slams home.

The beauty of the short stroke system is that it is simpler to build and maintain, as well as lighter on the shooter since the moving mass inside the gun is much lighter. The trade off is that there are more moving parts, and these systems are especially susceptible to a condition known as “carrier tilt.” Since the force is being applied directly to the top of the bolt (instead of in-line with the bolt like the gas expansion system Stoner originally designed), the bolt carrier has a tendency to tilt. The rear bottom edge and the front top edge exert more force on the surrounding materials due to that tilt, and it has been known to wear holes in the receiver extension. For that reason most good short stroke piston systems will have an exaggerated beveled rear edge to mitigate that carrier tilt somewhat, but eliminating it completely is impossible.

The short stroke system is by far the most popular for the AR-15 rifle simply because it is easy to retrofit existing designs to use the new operating mechanism. You need a special upper receiver for a long stroke piston, but the short stroke piston can be inserted into any upper. There are even retrofit kits available to let you do it yourself at home. It is currently in use by guns like the Adams Arms piston guns (their operating guts shown above), as well as the M1 Carbine, the SCAR rifle series, and others.

I’ve never been able to perform a legitimate test to determine if there is a winner, but in my mind the long stroke piston is the better option. There are fewer parts to worry about, and the heavier moving mass feels more solid to me. Short stroke systems seem to be more finicky — there’s one short stroke rifle I’m testing right now where I need to send it back because it just didn’t work with most ammo. That has never happened with a long stroke gun. Then again, there is more recoil to deal with, so that might be a dealbreaker for some.

It all boils down to personal preference in the end. There are companies that make great rifles using both systems, and you need to decide for yourself which one you prefer. But now that you know the difference, hopefully that decision will be more informed.

Click below to see other articles about rifles with various gas systems.