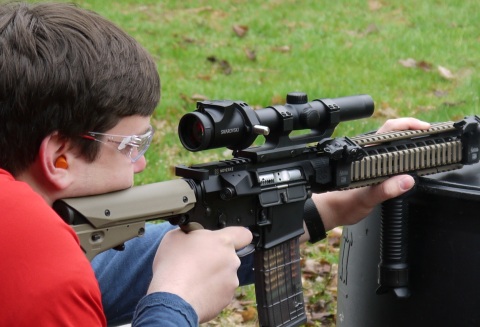 I’m looking to expand my firearm collection out into the realm of AR-pattern rifles, but I could use some advice. I’m a lefty and I’ve heard stories of other lefties having trouble with empty brass being ejected back at them. I’ve done some searching and found that there are companies that make ARs for lefties, do you have any that you would rank best? Also I like that you can change the upper and/or barrel to fire other calibers like .22LR or 300BLK. If I wanted to do the same on a southpaw-AR would it be as simple as changing just the barrel or would I need a whole new lefty upper in the new caliber? Thanks for the help.

I have a flood of AR-related questions to work my way through (yes, yours is coming Chris), but I thought this one would be a good place to start.

(The picture is from my Swarovski scope review, BTW. Just in case you wanted to see what a two star review for a $2,300 optic looks like.)

Semi-automatic firearms like the AR-15 are so easy and convenient to use (especially in competition settings) because they fire as fast as you can pull the trigger. There’s nothing to manipulate between shots like on a pump action or bolt action firearm so the time between shots is much shorter.

One side effect of the faster action is that the spent brass from the fired cartridge needs to get out of the way of the fresh round and do it quickly. Thanks to the speed with which the bolt flies backwards firearms such as the AK-47 and AR-15 have been known to fling hot brass into people’s faces, especially those standing right beside the shooter. Trust me, as someone who was the recipient of such a gift on more than one occasion, it’s not pleasant. Some guns mitigate this by ejecting the brass straight down (like the Steyr AUG) or up (like the M1 Garand), but the “modern assault rifles” were having none of that.

The U.S. Armed Forces quickly realized that this was going to be an issue with the M-16, as making one version for lefties and one for righties was impractical, and in the heat of battle the ability to use someone else’s gun was essential. The solution they came up with was ingenious — a small metal dealie was added just behind the ejection port on the gun that deflected the brass away from the shooter’s face. 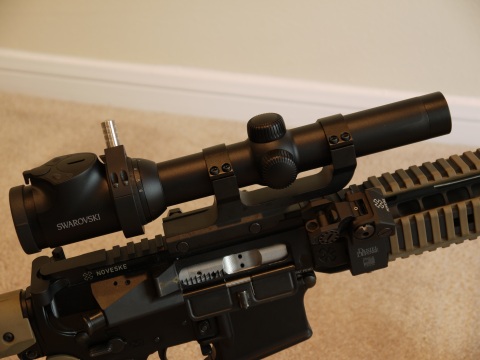 You can see the brass deflector pretty clearly in this picture, it even has some brass marks from where the cases have been hitting it.

The deflector works, and lefties need not fear hot brass nicking their face. Even the hot gasses that come out of the bolt carrier as it cycles are no worry thanks to it being positioned well forward of the shooter’s face. Even so, there are some people who think the flying brass is distracting and prefer the ejection port be on the “proper” side of the gun, and so the AR industry has designed and sells AR-15 uppers that eject on the left side.

So what’s the difference between a right and left side ejection port in an AR-15? The only differences are in the bolt, bolt carrier and the upper receiver. Those parts need to be changed so that they operate like a mirror image of their “standard” counterparts, ejecting shells to the left instead of to the right. Everything else, including the barrel and lower receiver, can remain the exact same.

Speaking of the barrel, thanks to the AR-15 barrel being more or less symmetrical there is no need to swap it out for a special left-handed version. All AR-15 barrels fit all AR-15 upper receivers no matter whether the ejection port is on the right or the left. So go on, grab that .300 BLK barrel you’ve always wanted and go crazy. And just FYI, .22lr works just fine out of a 5.56x45mm NATO barrel with a conversion kit. It’s not exactly the same diameter but close enough to work for me.

Which manufacturer makes the best leftie uppers? I may be a little bit of a fanboy but I’d say Noveske is the place for you. Sure they’re spendy, but they’re perfect. If you’re willing to do some of the work yourself STAG Arms makes a great left-handed upper receiver that can be purchased online and will work for you, just make sure you get the left handed BCG as well.