Despite (or because of) various cover stories, we still don’t know what the CIA was doing in Mexico when an armed group attacked a diplomatic vehicle. Rest assured The Company’s agents weren’t there for pleasure. And that the U.S. is up to its eyeballs in the ongoing intra-cartel conflict, which has left over 50k Mexicans dead, thousands more tortured and raped, and an entire country swimming in corruption. A vicious war fueled by U.S. drug money and enabled by an alphabet soup of U.S. federal agencies. In case you’d forgotten. Anyway, here’s the lastest on the CIA ambush from Proceso introed and translated by borderlandbeat.com. It doesn’t shed much light on the motives for the attack but it does show you what happens when you mix lawyers, guns and money . . .

United States intelligence services have an extensive and detailed file regarding Genaro Garcia Luna’s alleged ties with drug traffickers, DEA sources tell Proceso. Added to the suspicions surrounding the person who served as Secretary of Public Security in Mexico is a pathetic episode in which he was the main actor.

In a meeting of the Merida Initiative that took place last September in Washington, Barack Obama’s security cabinet was surprised when Garcia Luna begged “forgiveness” for the attack by federal police officers against CIA agents at Tres Marias. “Deplorable” attitude, says one of the witnesses to the incident.

“I want to take this opportunity to apologize on behalf of the institution and personally for the events that took place at Tres Marias,” reads the transcript of Garcia Luna’s words, contained in State Department “classified documents” — of which Proceso has a copy– referring to the meeting of the High Level Consulting Group of the Merida Initiative behind closed doors last September 18th in Washington.

Addressing Secretary of State Hillary Clinton, Attorney General Eric Holder and Janet Napolitano, Secretary of Homeland Security, Garcia Luna stated: “We will do everything to punish the persons responsible.”

The State Department’s classified documents — in volumes 7 and 8, provided to Proceso by one of the  secretaries present at the meeting — give the impression that Garcia Luna and Felipe Calderon know who carried out the attack against the CIA agents and a captain of the Mexican marines, and why the attack was carried out.

“The President has instructed us to do our part and our conviction is to carry out an efficient task. The responsible persons will be punished, undoubtedly.

“The agency will do everything necessary to resolve this case and, of course, maintain effectiveness in our cooperation with you,” emphasized Garcia Luna in the apology directed at all the members of the United States security cabinet.

CIA agents Stan Boss and Chase Garnes and a Mexican Marine captain were the victims of an attack on August 24 at Tres Marias, Morelos, carried out by federal police agents –then commanded by Garcia Luna– wearing civilian clothes and using AK-47s.

Garcia Luna “spoke in Spanish, and I was stunned to hear his words apologizing to the United States for the Tres Marias incident, while the United States Border Patrol keeps killing Mexicans on the border and no one, on behalf of the U.S. government, apologizes for that,” said the secretary who delivered the classified documents to Proceso. 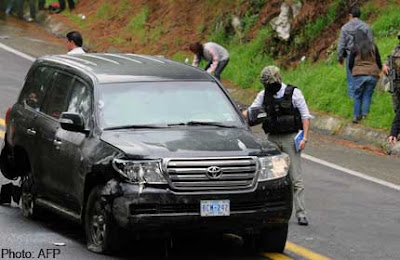 Trusted fully by Calderon, Garcia Luna was always a truculent and mysterious figure for the United States government, which throughout the six-year term chose not to get involved and avoided commenting about the hundreds of reports it has about the former head of the SSP’s ties with organized crime.

“The intelligence services have a bulky file of reports compiled in Mexico and the U.S. that point to  possible links that Garcia Luna has with members of drug trafficking (organizations). For example, with the Beltran Leyvas, with the Zetas and the Gulf Cartel. Some of this information goes back to the Fox administration,” a DEA agent, who asked to remain anonymous, tells Proceso.

“If the (Enrique) Pena Nieto government decides to review and follow up the intelligence information regarding Garcia Luna, it’s possible that this will clear up some of the doubts and mysteries there are in the Calderon government’s struggle against drug trafficking,” he specifies.

— Why now, when Calderon’s term is ending, are the U.S. agencies speaking out more openly about Garcia Luna? Why didn’t they do this before, if they already had important intelligence information about his?– the DEA source is asked.

— Out or respect for Mexican institutions and because he was the direct contact with the United States, assigned by the Mexican president. Only because of that.

— In the United States, is there proof that could directly implicate Garcia Luna with drug trafficking?

— There’s detailed information. Development of the investigations is the responsibility of Mexican federal authorities, if they have the will to do this and to develop an inquiry– he answers. 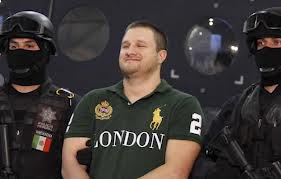 Edgar Valdez Villareal, La Barbie, in a letter  published on November 28 in the journal Reforma, claims that Garcia Luna has been on the payroll of drug trafficking groups for ten years.

“I swear that he has received money from me, from drug trafficking and organized crime, also with a select group made up of Armando Espinosa de Benito, who works with the DEA and would  leak information to me; Luis Cardenas Palomino, Edgar Eusebio Millan Gomez, Fancisco Javier Garza Palacios, Igor Labastida Calderon, Facundo Rosas Rosas, Ramon Eduardo Pequeno Garcia and Gerardo Garay Cadena, who are also part of this group and receive money from organized crime and from me,” says La Barbie.

(Excerpt from a report published in Proceso 1883, now in circulation).