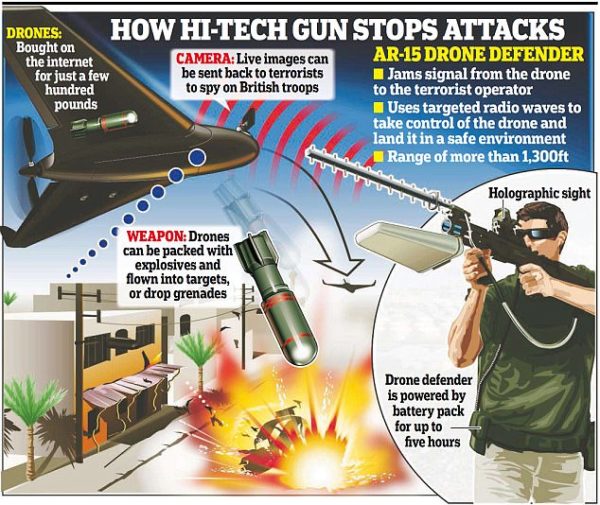 The image above – courtesy dailymail.co.uk — is slightly incendiary. The drones used by IS and its allies don’t look like that weird plane in the original Indian Jones movie. And there hasn’t been an incident where members of the Islamic death cult have deployed [obviously smaller] bombs on drones have been used against Allied forces in Iraq, Syria or Afghanistan. Yet. But, as the report indicates . . .

They are using drones for surveillance, which is a tactical advantage for the bad guys. Enter the AR-15 drone defender.

When the drones in Afghanistan are spotted over the New Kabul Compound they are disabled by US soldiers using the AR-15 Drone Defender, which looks like a rifle with an antenna mechanism to the front and has a range of more than 1,300ft.

Instead of firing bullets, its radio waves disrupt the signal controlling the drones, forcing them to fall to the ground . . .
Major Paul Martin, of the 1st Battalion The Royal Irish Regiment, said there had been 68 drone sightings in the past two years over the Kabul compound where a total of 150 British troops are based.

It is not clear, however, if the drones are being sent by civilians or insurgents.

The regiment’s commanding officer, Lt Col Graham Shannon, said: ‘They could be rich kids or they could be the bad guys.’

There are several Drone Defenders on the base which US soldiers from the 82nd Airborne Division are trained to use.

Of course, this raises the problem of bad guys using drone defenders to knock our drones from the sky. One assumes that our drones are now protected against radio wave interference.

And so it goes. But I have to say: I’d like to have a drone defender, too. Not because there are regular drone flights over TTAG’s secret above ground bunker. Because if the s hits the f, drones will be used against American citizens.