It’s a brave new world out there. Things are changing, and new manufacturing process are turning things that we would normally scoff at into reality. One of those new products is polymer cased ammunition, replacing the expensive brass cases with cheap plastic and saving not only a ton of weight but also rare(ish) metals. PCP Ammunition is the first to market with a prototype polymer ammunition, running at the moment in .308 Winchester only. We were handed a box to test out, and so I headed to the range with chronograph in tow to find out if the ammo is any good. Our test rifle today is the same one we’ve been running since forever, which is a Remington 700 AAC-SD model. I have made no adjustments to the internal mechanism of the gun, and only added an AAC muzzle brake slash silencer mount. However for today’s test the silencer has been removed — I don’t fancy using experimental ammunition in something that would take close to a year to replace. The change shouldn’t impact the final results, since we’re concerned about a calculated metric and not an absolute number. The ammunition ran fine through the gun, with one caveat: six rounds failed to fire. I struck each round about three times, and yet they didn’t go off. This same gun ran 50 rounds of factory ammo just fine on the very same day, so while I’m willing to entertain the possibility that I need a new firing pin it’s also possible that the primers are either harder than usual or just plain don’t work. Keep in mind that this is still experimental ammunition, and the final product will incorporate the feedback that I’m giving today. Also LuckyGunner went through 100 rounds of the same ammunition without a reported issue, FYI. Somewhat troubling, however, was the condition of the cases when they left the chamber. A large percentage showed some missing material from around the case mouth, which I chalk up to the extraction / ejection process. I’m betting that the case mouth knocked against the side of the receiver when the round was being extracted, and the brittle material deformed and fell off. So while it probably didn’t follow the projectile down the barrel, it doesn’t bode well for the ability to reload the ammo.

Enough farting around, let’s get to the numbers. The ammo was relatively evenly distributed in terms of data points, which is nice. There weren’t any wild readings on the chronograph, so I’m pretty happy with the consistency of their product in terms of being normally distributed. However, the IQR of the velocities put the ammo square in the middle of the range we’ve tested so far. 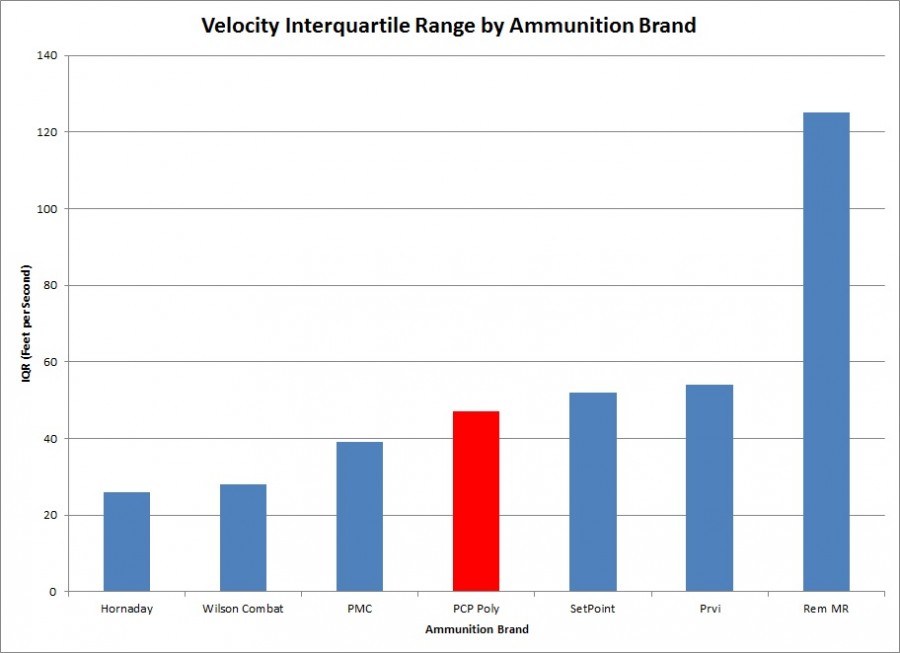 The ammo is planned to run somewhere around $2/round, and at that price you’d expect it to be pretty close to match grade. However, a number of factors are at work keeping it from competing with the big boys. First and foremost is the velocity — the cases can’t take a lot of strain so the ammo is loaded a little lighter than normal. Lower velocities tend to increase the variability of the ammo and keep it from being as consistent as possible. Also, as a new manufacturer PCP Ammo hasn’t quite ironed out the kinks yet so I’m willing to give them a little leeway for the moment. At the moment, I’m not that impressed with the performance of PCP Ammunition’s offering. But the good news is that they’re still tweaking things, so it has the possibility of getting really, really good before finally launching to the public. What I’m really excited about is that someone is finally doing something new with ammunition, not just making a new caliber or new formula but actually changing the way that the cartridges are made. I’m looking forward to how this will pan out in the future.

As always, here are the current charts showing the various brands of ammo and their relative IQR scores.