The first Kalashnikov clone I shot was an imported, Chinese MAK-90 which belonged to a friend. I was shocked by the low recoil and by how accurate I was with it. I came down with the “AK fever.” Unfortunately for me, this is not about now I acquired my friend’s MAK-90.

The AK-47 is an iconic and easily recognizable firearm. The Kalashnikov design is the most prolific rifle platform in the world and has a dedicated following in the United States. Due to AK-47, AK-74, and all Kalashnikov clones use by tyrants, criminals, and terrorists, it has a perception by some in the U.S. as a tool for evil. However, as seen in the Matthew Bowman case, it has been used for legitimate home defense in the U.S.

Taking all this into account, I found the right medicine for my “AK fever”: the Century Arms C39V2 Zhukov. This AK-47 clone is an American-manufactured AK for the 7.62x39mm round. This model has a milled receiver made from 4140 ordnance quality steel. The 16.5 inch barrel has a 1:10 twist which is chrome moly 4150 nitride treated. The barrel has a concentric LH 14×1 metric thread and comes with a nice muzzle device.

This C39V2 came with a 30-round Magpul PMAG, extended Magpul Zhukov hand guard and a folding stock. This rifle has standard AK sights, and the ability to attach a side mount for a micro red dot. MSRP on this model is $1,084.99. I purchased mine for approximately $100 less.

There are two things you quickly notice about the C39V2. The first is the weight. Per the Century Arms website, it weighs 8.65 lbs. The second is the high quality fit and finish. I did not see any scratches or scuff marks on the rifle. 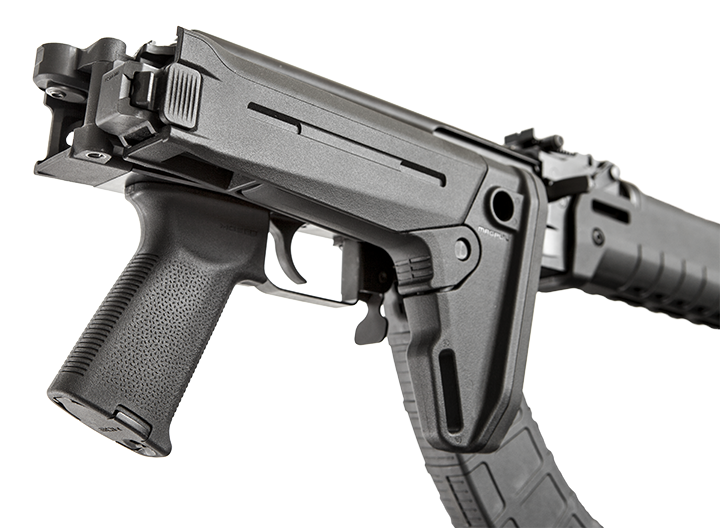 The folding stock fits securely in the receiver. This stock is adjustable and a QD mount. My only (minor) complaint is you have to purchase a Type 1 or Type 2 QD mounting kit to mount a sling at the end of the stock with a QD point. Other than that, this stock is amazing. It locks into place securely and tightly with no wiggle. When the stock is folded, it stays folded, but easily moves into position. As with other AK clones, the C39V2 can be fired when the stock is either folded or locked in place.

The Magpul pistol grip is nicely textured and has a storage compartment. Like all Magpul grips, it does its job. To me, one of the best compliments you can give a grip is saying you do not even notice it is there. This grip definitely earns that compliment.

The only ammunition I could find at my local gun store for this review was Tul Ammo, 162 grain FMJ steel case. It is not the most expensive ammo you will find as a box of 100 rounds cost me around $30 each. Due to the condition of the ammo boxes, which were taped together, I made an educated guess this ammo had been sitting on the shelf for some time.

I zeroed the sights from the prone position at 50 yards, as I do any AR-15. I zero at 50 yards because that is the distance my range allows. Since my primary focus with firearms is self and home defense, 50 yards is adequate.

Since this was the first time I have zeroed an AK, it took me longer than zeroing an AR-15. I noticed two things about the C39V2. First, it wasn’t comfortable to shoot prone. There is more recoil than an AR-15. There also felt like less surface contact since the AK magazines are more curved. I think a bench rest would be more helpful to mitigate recoil.

The second thing I noticed was the trigger. This is a smooth trigger. I feels light, but not too light. I do not have a trigger pull scale, but I can say that it is smoother than my IWI X95 or a mil-spec AR trigger. I found that while shooting prone, I had to be more intentional with my trigger press in order to avoid double taps. Once I zeroed the C39V2 I shot various drills. My targets were hostile QIT targets at distances between 25 yards and five yards. The trigger shined while shooting in a standing position with everything from single shots to rapid bursts. My Magpul PMAGs worked flawlessly. Conducting reloads was not difficult.

The magazine release is ambidextrous by design. I used various reloading methods including utilizing the fresh magazine to activate the magazine release and push out the empty. I was able to conduct save magazine reloads with little difficulty. That said, I was not as proficient as I am with an AR-15. If I were to use the C39V2 for home defense, I would need to train more.

The three negatives about the C39V2 are problems I would have with any AK: the safety, the bolt not locking back, and the sights. Most firearm safeties are on the left side of the firearm, with some being ambidextrous. Most right-handed shooters utilize their right hand thumb to manipulate the safety. Left-handed shooters have various methods depending on the firearm and safety. The AK safety is not easily set to “fire,” the down position. I found myself removing my strong hand grip (right hand for me) to manipulate the safety.

As with your standard AK platform, the bolt doesn’t lock back at all. The only ways to know your magazine is empty is to pull the trigger and hear “click” or to count the shots, which isn’t very practical.

If you’re used to AR-15 iron sights, you might struggle some with standard AK sights. At least I did. Generally speaking, I squint, not close, my support eye while firing. Doing some sight acquisition drills after the range, I discovered keeping both eyes open, the way one should, helped with sight acquisition and alignment. A red should definitely be utilized if the C39V2 is used for home defense.

Despite my struggles with the sights, the C39V2 is accurate at “minute of bad-guy” distances. The muzzle device probably aided in the rifle’s lack of muzzle rise. Shots to center mass grouped well. I made head shots relatively easily.

My final shooting drill consisted of 40 rounds at 15 yards. I rapid-fired a fully loaded, 30-round magazine center mass. I then shot 10 head shots slowly. The rapid fire grouped well, but was not fun. The recoil is noticeable when shooting that many rounds quickly. Moreover, there was a lot of smoke coming from the gas port. The head shots were decent. Being the end of my range time with the rifle and rather hot, I didn’t expect to do well. However, the grouping was tight elevation wise, just spread out horizontally. I attribute the horizontal distance to my lack of familiarity with the sights.

I wore gloves during all strings of fire. The Magpul furniture made for very good heat shields. I did not feel any discomfort due to heat at all, even at the end during the rapid fire. I have found several AR-15’s with quad rails and modular rails to be warm to the touch, even while wearing gloves.

Disassembling the C39V2 is as simple as any other AK. Push in the rear button, pull off the top cover, remove the recoil spring, then piston and bolt carrier. Finally, flip the switch at the rear sight to remove the piston tube. Cleaning and reassembly are also quite simple. Just do everything in reverse.

I added an MLOK rail at the front of the handguard for an Inforce WML. Every home defense rifle should have a light.

The only thing that concerns me is finding the right defensive use ammunition. Searches at some popular firearm accessory online retailers yielded much fewer results for 7.62X39mm than 5.56NATO. The fact is, the AR-15 is the most popular rifle platform in the U.S. Ammo selection definitely reflects that fact. However, there is some Remington 7.62×39 Core-Lokt that looks promising. Add a decent suppressor and optic and you have another possibility for a home defense firearm.