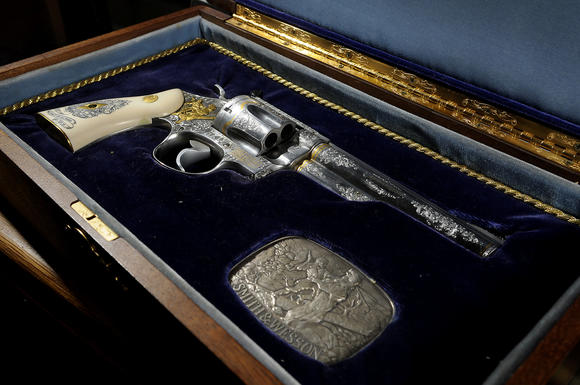 The owner of this one-of-a-kind S&W 629 .44 Magnum is putting the gun up for sale. Asking price: $100,000. Scott Hoffman, owner of Hoffman’s Gun Center and Indoor Range in Newington, Connecticut, is selling the gun in support of gun rights. He says that the money from the sale will go to support candidates for political office who are committed to overturning the gun legislation passed in the wake of the school shooting in Newtown. “I’m giving up something I love to fight those laws,” Hoffman said. If you’re interested, the gun is listed on Gunbroker. . .

Corpus Christi, Texas would like to remind residents that live ammunition (even .50BMG) is not recyclable through the municipal system, so please discontinue putting it in your recycle bins. (What’s the headstamp on the other one?)

The Thurston County, Washington Sheriff’s Department held a firearm and drug takeback day (their name) which netted seven guns, 150 pounds of prescription drugs, and several thousand rounds of ammunition. The interesting part of this event, to me, was the disposition of the weapons. According to Sgt. Ray Brady, one of two things can happen with the firearms: they can be destroyed at the owner’s request, or the owner is asked whether the Sheriff’s Office can trade them to a firearms dealer in exchange for ammunition for deputy training. I still disagree with buy-ups, but in this case they’re not paying for the guns, and more training is not a bad thing.

A few weeks back, RF wrote about the Gun Box, the RFID-enabled gun vault for storing your goodies. A few days ago they announced that they’d surpassed their $100k IndieGoGo funding goal, raising nearly $140k, and that the first 400 units would begin shipping December 12th. So if you kicked in, there’s that to be excited about.

I’ve been saving this for a weekend post, because it’s long, but it’s worth it. Well, it’s worth it if you like Carnik Con. If you don’t like Carnik Con, well… sorry. (P.S. NSFW language, but what are you doing at work on the weekend?) (P.P.S. Full minute of gag reel if you hang on to the end.)


Don’t use your thinking brain, just use your doing brain.

If you don’t like Carnik Con, I don’t want you to miss out on your video fix, so here’s Richard Ryan tapping a beer keg with det cord.