That’s right, a range review of a nightstand-sized gun safe. Why? Because I shot it. A lot.

Watch the video embedded above, or click HERE to view it on Rumble. Big thanks to Silencer Shop for helping with our video production! They have the best prices and the easiest, most streamlined suppressor buying process in the country, so check them out.

By the way, we’ll be launching a range video like this one every Thursday afternoon and a studio video (like this week’s The Truth About Silencer Volume Level) every Monday afternoon. Subscribe on Rumble to see ’em before their associated TTAG articles go live. We receive a lot of emails from Chinese companies asking us to review their products. Most often it’s gear like flashlights and tools, plus plenty of small gun accessories like muzzle brakes, optics, and bipods. All of it cheap, much of it gimmicky. PINEWORLD‘s email was, by its subject line, clearly in this same vein of a Chinese company looking for a review. So I ignored it and I ignored a follow-up.

Then, be it catching me at the right time or something in the Gmail snippet that piqued my interest, I clicked and read their next email and saw a biometric gun safe — the PINEWORLD K5 — that looked pretty legit. It was clearly very feature-rich, appeared to be of good quality, is a good size for a nightstand, desk, or closet, and they obviously believe it to be extremely tough. So tough, in fact, that they say it will stop pistol bullets. So from-a-country-that-doesn’t-allow-firearm-ownership, though, that the ad image demonstrating its ballistic resilience shows an entire rifle cartridge rather than a pistol bullet. LOL.

For the first time, not only did I read the unsolicited email but I replied to it and said “okay, send me a safe.” The very next week it was at my door.

My first impression was that I was surprised and impressed by its weight. Almost 20 pounds. Yup, it’s actually made of heavy gauge steel so we’re off to a good start. I read the instructions, installed four AA batteries, and had a six-digit password and three sets of fingerprints programmed into the PINEWORLD K5 safe within about five minutes. There’s also a key lock in the front for backup use and a USB-C port so the safe can be plugged into external power, allowing it to be opened with the code or fingerprint even if the owner loses the keys and the batteries are dead. Slick. Somehow I had missed in the description that there’s a speaker built into the K5 Gun Safe. This made setup even easier as it gave verbal confirmations when I configured the code, admin fingerprints, etc., and it announces when the safe is unlocked. Furthermore, should someone tamper with the key lock or pry on the lid, the speaker emits an alarm. Volume is adjustable and the speaker can be disabled, too.

Another tech feature included in the PINEWORLD K5 Biometric Gun Safe, but disabled by default, is WiFi. By turning it on and connecting the safe to a WiFi network then downloading the app, the owner can change settings and monitor or even open the safe remotely. Tamper alarms are sent as push notifications to the owner’s phone, wherever the owner may be.

Before taking it to the range and shooting it up, obviously I put the K5 through regular testing to see how it functioned. The short version: it’s a great little safe. There are more secure safes, to be sure, but as convenient little “residential storage containers” go, the PINEWORLD K5 seriously holds its own. 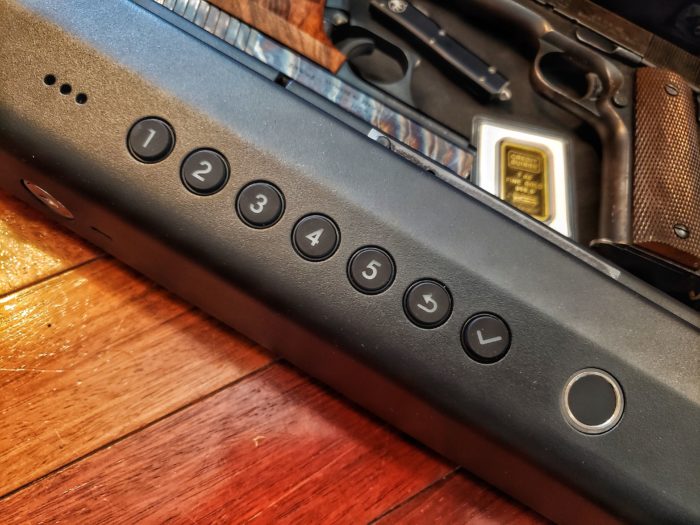 I found the fingerprint sensor to be extremely fast and surprisingly accurate. Unlocking was accomplished with almost no delay at all, and only once in over a hundred attempts did it not recognize my fingerprint. At the same time, my girls and almost-ex-wife weren’t able to trick the K5 despite giving it more of a “go” than I would have had the patience for. Whether unlocked via the backlit keypad, the fingerprint sensor, or the manual key lock, the K5’s lid pops right open thanks to a gas strut. It opens smoothly, quickly, and solidly, and will do so regardless of the positioning of the safe. A cable allows the safe to be locked to a solid object like a seat bracket in your truck or a bed frame. I appreciate how the cable actually bolts inside of the safe rather than simply squeezing through a slot in the door like with most similar safes. For a more permanent solution, four pre-drilled holes in the back of the K5 Gun Safe allow it to be mounted to a wall or to the floor.

Interior surfaces of the PINEWORLD K5 are lined with a rubber foam to keep your firearm(s) safe.

Lockup is secure, and the fit of the door within the sides and back of the frame is precise and slightly recessed. This makes attempts to pry the safe open much more difficult by reducing panel gaps and making any remaining gap difficult to access. Fit is also good at the front of the door, with a tall, rounded edge making pry attempts difficult.

How did the PINEWORLD K5 Biometric Gun Safe hold up to a bunch of 9mm and a round of .308 Winchester? I’m afraid you’ll have to watch the video to find out! 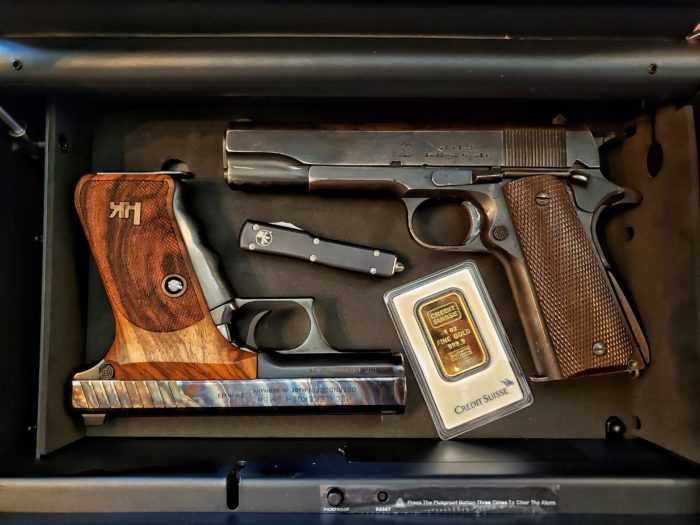 I’m glad I read that email, because this turned out to be a really solid product. PINEWORLD sent me a coupon code to share in case anyone wants to pick up a K5 of their own: “PINEWORLD” is good for a 25% discount.

For the record, this is not an affiliate thing and neither I nor TTAG is receiving any sort of kickback or commission or payment or anything of the sort as part of this, and PINEWORLD isn’t an advertiser. I always feel weird when including a coupon code in a review, but PINEWORLD informed me of the code when they shipped the safe and, especially given it’s a solid 25% off, I’d be remiss not to include it.

Overall  * * * *
Color me surprised, but the ships-directly-from-China PINEWORLD K5 Biometric Gun Safe is a feature-rich, well-made, quality product that compares extremely favorably to other containers in its general price range. It’s a solid choice for a quick-access desk, nightstand, closet, or vehicle handgun safe.