Who could have possibly seen this coming? . . . Seattle’s gun-sale tax raises less than $200,000 in first year – “Seattle’s tax on the sale of firearms and ammunition raised less than $200,000 during its first year, according to Seattle City Councilmember Tim Burgess. The city had previously kept the revenue information confidential to protect taxpayers’ privacy, as reported in a recent Seattle Times story. In an email sent to The Times Tuesday, Burgess wrote: ‘City and state laws prohibit the city from releasing specific tax information when such information is likely to identify specific taxpayers. In this context, we can report that there were approximately 15 potential firearm and ammunition taxpayers in the city for 2016. During its first year, the firearms and ammunition tax payments received by the City were less than $200,000. … When Burgess proposed the tax, he said the city’s budget office had estimated it would raise $300,000 to $500,000 a year.'” Notice he doesn’t say how much less than $200,000 they collected. Wasn’t that the point? . . . New Ohio gun law expands where people can carry concealed weapons – “A new Ohio law begins today, allowing employees to bring guns to company parking lots and licensed Ohioans to carry concealed guns to more places. Employers can still ban weapons inside their businesses, but they can no longer prohibit concealed carry permit holders from leaving firearms locked in their personal vehicles parked on company property. The new law also grants civil immunity to employers for injuries and deaths that result from guns brought on company property.” 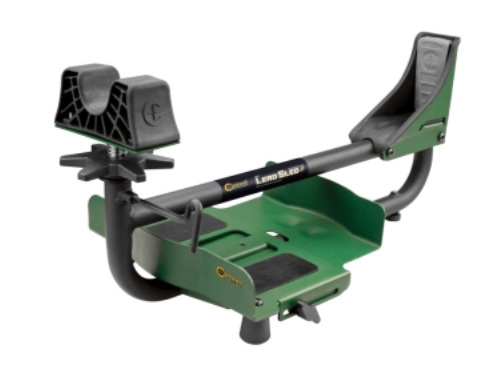 Caldwell® Shooting Supplies Launches Innovative New Shooting Rest – “The new Lead Sled 3 shooting rest securely holds a firearm on target, and reduces felt recoil by up to 95% when compared to shooting without the rest. The innovative skeletonized front rest, with non-marring surfaces, securely holds a variety of firearms in place without damaging the firearm’s finish. The improved rear buttstock cradle featuresa top of the line recoil reducing pad and a non-marring cradle to keep the firearm in place. The Lead Sled 3 also features a “no wobble” elevation ram to easily stay on target.”

Only certain people can handle the responsibility that comes with firearms . . . Former Fairfield police janitor sentenced to prison for selling guns from evidence room – “‘Roy Hunter was stealing guns from a police department and then selling them to persons who could not legally buy a firearm,’ Posey said. ‘ATF and the Alabama Law Enforcement Agency stopped that illegal flow of guns back onto the streets. Our community is safer because of their work and this prosecution.’ Hunter was federally indicted on July 26, 2016, and arrested the following month. His first arrest happened in July 2015, when he was charged with smuggling guns out the Fairfield Police Department’s evidence room and then selling them out of his home. At the time, he was a janitor at the department.” Looks like there are exceptions to the Trump Slump . . . Rifle maker expands operation – “A maker of AR-15 and AR-10 rifles, parts and accessories in the area has expanded. Jenison-based Next Level Armament said it added 6,000 square feet to its 24,000-square-foot facility. Next Level Armament, along with Next Level Manufacturing, has a product line with both forged and machined billet receivers and complete rifles in calibers such as 5.56 x 45, .308 Win and .450 Bushmaster, the latter ‘a favorite among today’s Michigan deer hunters.’” Baby steps . . . Lawmakers trade fire during gun bill debate – “Concerns over a proposal to allow concealed weapons at schools that are used for religious services prompted a heated exchange Wednesday between two House members. Guns are prohibited on school grounds unless they are secured in a locked vehicle, but House Bill 174 aims to carve out an exception for ‘educational property [that] is the location of both a school and a building that is a place of religious worship.’ Sponsor Rep. Rena Turner, R-Iredell, (above) said the measure would let concealed carry permit holders take their guns with them to religious services if it was ‘outside the operating hours of the school’ and a representative of the educational property gave them prior authorization.”