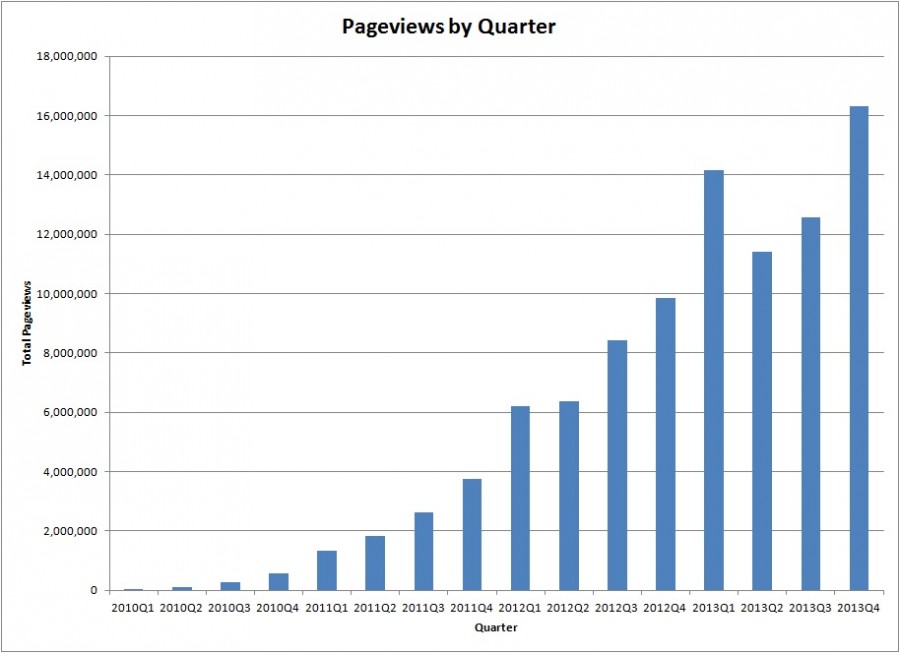 If RF had his way, there’d probably be a giant banner across the top of the website proclaiming our awesomeness with one of those cheesy “visitor counter” widgets. But I made a deal a few years back: keep the cheerleading to a minimum and I’ll do a full stats breakdown every quarter and post it for all the world to see. Well, another quarter just ended and that means it’s once again time to draw back the curtain and give you, our readers, an eye-full of the site’s latest stats. And if I could use three words to describe how we’re doing, they’d be “better than ever.”

The first quarter of this year spiked our stats so hard that it took nearly six months to get back to the normal trajectory. There’s a standard and predictable growth pattern that we’ve seen in terms of readership, and anything beyond that tends to freak me out just a little bit. But ever since about the end of the second quarter, we’ve returned to our normal “up and to the right” pattern that we’ve enjoyed for years. Month over month, we seem to be experiencing an extended spike in traffic. We’d heard form other bloggers and our previous ad partners that they usually see a slump during the holidays, but for us it’s been the exact opposite. I figure it’s because people prefer to spend their time with us than their families, but that might just be me. The interesting thing is that even though we switched to a less frequent posting schedule for the holidays, it doesn’t seem to have impacted our traffic. That’s mainly due to a couple articles which really knocked it out of the park view-wise, but I’ll get to that in a bit. The metric known as “unique visitors” isn’t exactly the most scientific count of the number of people who read our site, but it’s an internet standard measure and its ‘s close as we get. And that number for this quarter is over one point five million. Per month. That’s almost three times the readership of Guns & Ammo. In fact, that’s more readers than the NRA’s American Rifleman (1.39 Million according to WA). That means one could make the claim that TTAG is the most widely read firearms publication in the world. Which is kinda cool.

And then there’s the derived metric we can extrapolate from that figure: lost productivity. It’s pretty simple: if we know how much time people spend on the site and how many of them were here, we can use the average hourly wage (for November 2013, since December’s isn’t available yet) to figure out how much money we cost the economy in lost productivity when all of you could have been working. The tally: for Q4 of 2013, that figure is $958,466,623.47. In other words, this one website cost the world economy almost $1 BILLION DOLLARS in lost productivity. And that’s only this quarter. How cool is that?

So is all this traffic because gun sites are doing well, or are because we’re just the best? Well, here are a few selected competing websites and their global rankings, as reported by Alexa.com:

That might seem pretty low, but keep in mind that this is a ranking against all other websites in the world. Like Google. Or those sites that require a credit card to enter. So, I’d say that we’re still the most popular firearms blog in the world — and gaining. Bearing Arms came out of nowhere in the last few months, driving traffic to their site by using the “2nd Amendment” Facebook page to promote their posts to over a million followers. And seriously, who doesn’t like the Second Amendment? It’s social (network) engineering at its finest, and for that I tip my hat.

For us, our popularity is due to the ever-popular posts we have in our back catalog and their easy availability via Google. So it comes as no surprise that our most-read articles aren’t necessarily from this quarter. Here’s the top 25:

Gun reviews are the theme, as usual, but there are some more timely articles sneaking their way in there. The story about gun confiscation notices in New York City absolutely exploded, and probably is the reason why our monthly numbers are running a little higher than expected.

So, that about wraps up our quarterly stats. I’ll run a post in the coming days detailing our top posts for the year, but overall things are looking pretty peachy. Nevertheless, we won’t rest on our laurels — we’re committed to continuing to bring you the best and most comprehensive coverage of the world of firearms, and that’s exactly what we’ll do. As long as the ammo lasts, that is.