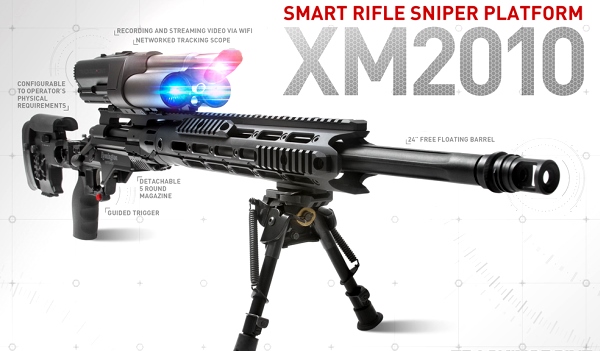 A couple months ago TrackingPoint was apparently circling the drain. The guns were selling and things looked rosy, but some remarkable downsizing within the company gave the impression that they were looking to shed some dead weight in order to maintain their profit margins. It looked like TrackingPoint may have reached market saturation with the civilian population and the military and law enforcement agencies hadn’t fully bought in just yet. After a couple months without taking orders it looks like TrackingPoint is getting back on its feet and re-launching once more . . .

TrackingPoint announced today the successful completion of a financial and operational restructuring.  The company is accepting new orders while fulfilling its backlog of existing orders.  In the spring of 2015, TrackingPoint temporarily suspended production and deliveries in order to put the company back on a strong financial footing.  TrackingPoint previously announced 2014 year-on-year unit growth of 281%, and its management indicated that the rapid growth subsequently outstripped the company’s ability to manage its operations.

TrackingPoint’s founding team of John Lupher and John McHale has returned to manage the company going forward.  John Lupherreassumes his founding role as Vice President of Engineering, while John McHale, formerly Chairman, returns to his original role as CEO.  “We were successful early on, so John Lupher and I decided to go back to our roots and take TrackingPoint to the next level,” said McHale.  Frank Bruno, Chief Operation Officer, and Richard Wierzbicki, Chief Financial Officer, bolster the team to ensure the company operates efficiently going forward.

The company has a five person board of directors that includes Eric Olson, the first Navy Seal to rise to the rank of four-star Admiral.  Olson, a Navy Seal for 38 years and retired former Commander of the US Special Operations Forces, helps lead TrackingPoint’s defense strategy and initiatives.  “I’m glad to see TrackingPoint moving forward with renewed focus on law enforcement and the military.  This is innovation at its best, with a real and meaningful purpose for security forces and war fighters,” said Olson.

“This is a new beginning for TrackingPoint,” said McHale.  “We will focus intently on the consumer, continue to innovate, and operate in a way that ensures long term success.”  The company’s investors include the Friedkin Group, Goff Capital Partners, and McHale Labs.

The astute reader will notice no mention of a new business plan or any semblance of an idea of what they’re going to do differently this time. I had a chat with returning CEO John McHale this afternoon and he confirmed that, as suspected, “meet the new business plan, same as the old business plan.” The focus will still be on presenting their line of commercial products for sale while working with military and law enforcement partners to meet their needs. The restructuring the company went through was mainly based on back office issues dealing with the 200%+ growth they had experienced and not any cash flow issues after all, so a change isn’t really warranted in their eyes.

In terms of the commercial side there is a little bit of a change. Where previously TrackingPoint had simply manufactured the rifle and shipped it to the customer, the new focus will be on creating more of an experience around the product. McHale talked about bringing new owners down to Texas for a walk-through of the technology and a familiarization course, among other projects. If they can create a community around these firearms, there might be more of an appetite for subsequent sales from that pool of clients. That could provide a revenue stream that would otherwise be difficult to maintain as they reach market saturation among those capable of purchasing their rifles.

There might be some changes on the horizon, though. “We’ll never be in Walmart” John says, but he also mentioned that there would be a down-market line extension some time late next year to finally put a TrackingPoint rifle within the price range of a larger audience. He mentioned that they’ve been inching lower on the MSRP with their line of AR-15 rifles ($8k instead of $13k to $27k for the bolt action rifle systems), and while they’ll never be as inexpensive as a Wally-World Bushmaster there’s hope that eventually that number will be below the “used car” price point point.

In terms of the market for their firearms, John isn’t concerned. He noted that TrackingPoint had grown significantly year over year, and hasn’t seen any indication that the market for their guns isn’t going to dry up any time soon. The business was profitable last year and continues to be profitable, and they expect to chug through the backlog of orders and expect to have the existing orders shipped out in the next 60 days or so.