The above graphic is from Smith & Wesson’s investor presentation [via businessinsider.com]. I’ve already written a post about the business side of the gunmaker’s recent results. I’d like to highlight a different aspect here: the fact that personal/home protection is the number one reason people buy a firearm – despite the fact that violent crime continues is historic decline. Gun control advocates paint gun sales in general and the personal protection purchase rationale in specific as a sign . . .

of NRA and industry-induced paranoia (with the implication of racism). I think of it as Americans taking responsibility for their own safety, even as the number of armed law enforcement agents has dramatically increased. (Wikipedia: “Ten of the 50 largest local police departments reported double-digit increases in sworn personnel from 2004 to 2008.”) Americans taking responsibility for themselves? How great is that?

Almost as great as the stats debunking the antis’ constant chorus that firearms ownership is falling. Here’s the data: 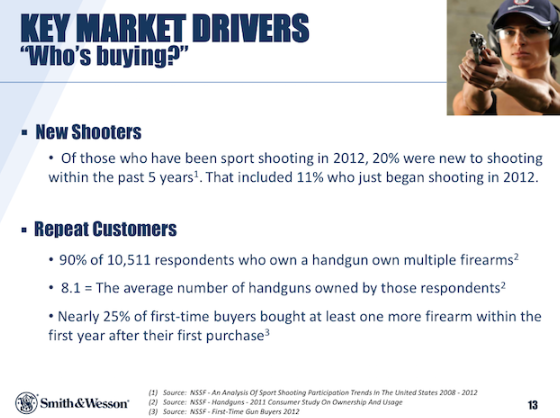 Notice that 25 percent of first-time buyers bought at least one more firearm in their first year of ownership. That means new gun owners remain active buyers and, thus, gun rights supporter. After all, they are [still] at the sharp end of any legislation designed to delay, deny or inconvenience lawful owners. I mean, keep guns out of the hands of dangerous people. Or something.