Let’s take look at two mainstays: the 5.56mm and 7.62mm NATO rounds. These are easily two of the most popular rifle rounds in America, and for good reason. And they’re still the subject of a lot of questions we get from readers here at TTAG.

Both cartridges offer a number of substantial benefits to every level of shooter and hunter. And they’re the subject of almost endless debate. I could end this article right now by saying that a person could do anything and everything they’d need to with these two chamberings, but where’s the fun in that?

We will start by looking at the general use characteristics of these rounds as far as where they are similar, but don’t worry, we will also be looking at the distinct advantages each offers as well. The first thing that you should know about these two rounds is that they share a very similar story. Both were the result of post-WWII armament decisions, decisions that showed how little had been learned from battlefield experience.

Unlike the Soviet Union, which very closely mimicked the German STG-44 and the 8mm Kurz cartridge with their AK-47 rifle and 7.62x39mm round, the US and their NATO allies decided to go with a larger and more powerful rifle and FMJ cartridge. The 7.62x39mm and the AK-47 were the direct result of Russian experience in the war, but the weapons and cartridges fielded by NATO in the post-war era still adhered to what were essentially modernized Napoleonic theories of engagement.

The 7.62x51mm NATO was designed and adopted worldwide to replace many Allied cartridges such as the American .30-06 and .303 British in rifles and machineguns. The British army’s adoption of the FN FAL rifle family led to an almost international acceptance of the platform to the point that the gun was called the ‘Right Arm of the Free World’.

The FAL, often pictured in the hands of strapping young men, sometimes wearing shorts, became the world-wide symbol for the struggle against the evils of Communism, Socialism, and Marxism. The 7.62 NATO had taken hold, but the fight against Communist domination would soon spawn another round: the lighter weight 5.56x45mm NATO.

This little cartridge is, in one form or another, the most popular centerfire rifle round in America. Even though NATO had planned for years and finally adopted the 7.62x51mm, the war in Vietnam called for smaller and lighter weapons that allowed for more ammo to be carried.

Vietnam was the second land conflict in Asia that was essentially a proxy war between communists and the free world, but it would not be the last. The United States battled communist guerrillas and regulars that had the AK-47, which was a mature weapon at the time and superior in almost every regard to the USA’s M14, which was essentially an M1 Garand that featured 7.62x51mm cartridges in detachable box magazines.

The little-known AR-15, a civilian sporting rifle that was designed with aerospace materials, was adopted in small numbers by select units and sent to the front in Vietnam. The weapon eventually became the M16, and the ammunition it fired was dubbed the 5.56x45mm NATO. NATO pushed back against this choice, but seeing as how America was, and still is, the trend-setting big brother of limp-wristed European tea-drinkers, the 5.56mm NATO became a thing.

As a side note to complete the cycle of violence, the Soviets, after looking at the value of small-bore, high-velocity rifle rounds, designed their own answer to the 5.56x45mm, the 5.45x39mm and chambered it in the AK-74 rifle. This round accompanied them into Afghanistan, where they became mired in their very own Vietnam against American-backed fighters, a choice that spawned perhaps the best action movie of the era, Rambo III.

When it comes to what you get with today’s variants of 7.62×51 and 5.56×45, you have more options than a warehouse-sized Golden Corral. The ammunition is plentiful and, for the most part, interchangeable with commercial .308 Winchester and .223 Remington, respectively. Yes, I know they are slightly different and I’m sure some of you will be all too happy to tell me just why, but for the average person, there is no noticeable difference.

There are a couple basic platforms that I will cover here. The first is the semiautomatic class of rifles. There are many, many, many types and brands out there from dozens of manufacturers. The two most common are the 5.56mm AR-15 and the 7.62mm AR-10. These are, for the most part, very mature platforms that have massive market support. They are widely used for home defense, hunting, target shooting, recreation, sports, and collecting. You will struggle to find a more adaptable type of rifle than the AR-15/10 and there isn’t much you can’t do with them.

The next major platform is the bolt action. Most bolt action rifles today are used for hunting and target applications. It is rare to find a home-defense bolt-action these days, but I’m sure it happens. The hunter and target shooter will typically select a rifle for the game being hunted. Many small-game and varmint hunters prefer a bolt-action in 5.56/.223, as the small bullets will not ruin a pelt in most cases. Hunters after deer and larger game would do well to have a 7.62/.308 because the bullets are larger and have better terminal ballistics over distance.

At the end of the day, most people looking at these two rounds will select a semiautomatic because it offers a far wider degree of uses and can be readily adapted to nearly any circumstance. When looking at them as apples to apples the logical choice between the two, for most end users, is the 5.56mm. The only major and significant advantage to the 7.62mm for general use is that it has more energy for hunting large game. 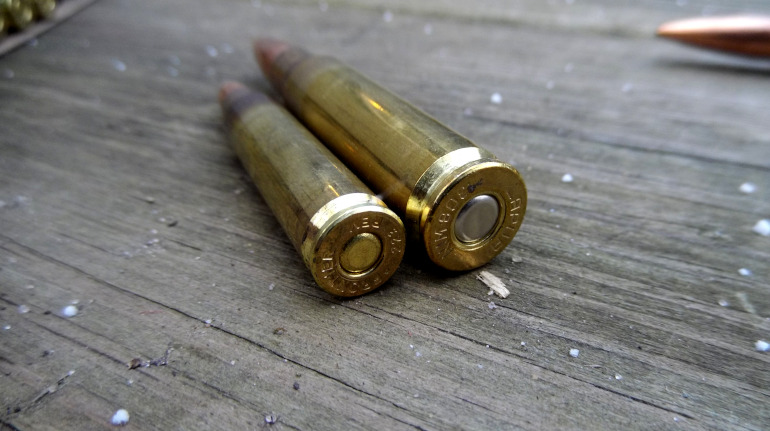 For the average American gun owner, the 5.56mm makes a huge amount of sense. The ammunition has substantially lighter bullet weight, is cheaper, and has lower recoil. Inside a 500 yard effective range, which is long range for most shooters out there, there is little difference in terms of trajectory between the two (in a generic sense, I know that special rounds will vary). The low recoil combined with flat trajectory and generous magazine capacity makes the 5.56mm very appealing. A person with an 18” SPR-style rifle similar to the Mk12 would be hard-pressed to find a better general-use rifle.

This is not to say that I don’t like the 7.62 NATO. I have used it for years and have tens of thousands of rounds downrange, mostly from bolt actions. I find that it is a better round in bolt actions than in semi-autos and it offers extremely long barrel life, moderate recoil, and relatively low expense when compared to round that are larger, but only slightly more powerful. If you reload your own and like a forgiving round, the 7.62 NATO is your best friend.

For many people, the choice is easy: get both and make them specialize a bit. A safe with an AR in 5.56mm and a nice, well-built bolt action 7.62mm is the safe of a very practical man.

These two rounds are under constant assault these days by rounds like the 6.5 Grendel, 6.8 SPC, 6.5 or 6mm Creedmoor, and many other soon-to-be-forgotten flavors of the day, but rest assured that the choice of either is a wise one in the long run. They will never lose effectiveness. You can certainly improve upon the performance of both the 5.56mm and 7.62mm NATO, but if TEOTWAWKI comes tomorrow, would you really pick that boutique six-point-something?