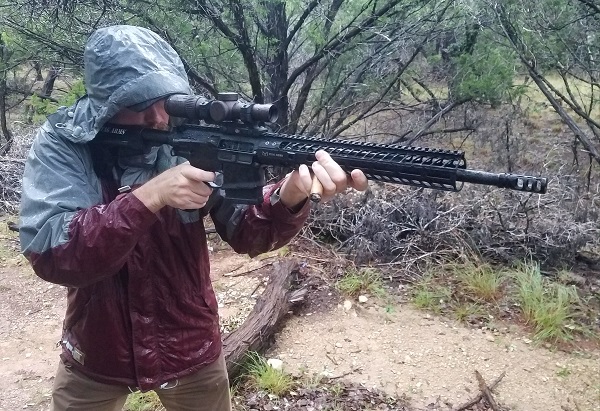 From short range combat in the bush to long range sniping, the AR-10 has proven itself in combat. It’s also proven itself on hunting grounds all over the world, especially here in the US. In fact, if I go pig hunting and someone shows up with an AR-15 in 5.56NATO, I’m secretly hoping they’re a good shot. They’d better be if we’re recovering those hams. If someone shows up with an AR-10, I’m not worried. That pig’s not going far.

Unfortunately, the AR-10s are often much more expensive than AR-15s. That’s almost entirely down to the smaller platform’s popularity. In terms of materials, AR-10’s aren’t that much more expensive to manufacture. Stag Arms — a company that’s been making rifles so long I forgot about them — is now churning out a budget AR-10: the Stag 10S. SPOILER ALERT: It’s an AR-10 with a quality level well above its price point. The Stag Arms 10S in .308 looks a whole lot like a standard-issue mil-spec AR-15s, just a bit bigger. The forged receiver is anodized. The 16-inch barrel is chrome lined. The furniture is a bit of a mixed bag, including Magpul’s adjustable ACS. I’m a big fan of that stock, if only because it has built-in storage space for batteries and ear plugs. While it doesn’t offer much in the way of a butt pad, the 10S doesn’t generate enough recoil to make you miss it.

The Stag Arms rifle comes equipped with a Hogue pistol grip with deep finger grooves and textured sides. I never like finger grooves; I like to crowd my hand up against the trigger guard as high as possible. But both the stock and grip have been a commercial successes for many years on other rifles and they work well together on this one.

We can assume that most buyers will put a scope on their 10S. Chances are it will live right over the charging handle — making it even harder to get at the handle. A big boy latch would be more appropriate for this gun, and wouldn’t raise the price much. Of course, an aftermarket swap is simple and the first thing I’d do to a stock 10S. 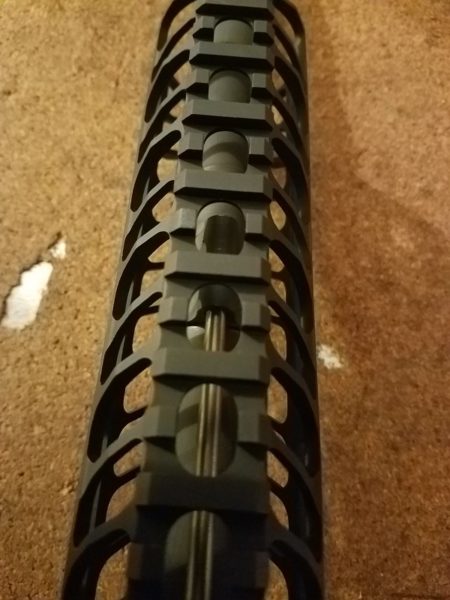 The 10S’s 13.5-inch M-LOK hand guard looks kinda weird; every other horizontal rail section on top is missing in the middle. I assume it was designed that way to save weight. Or just look different.

The set-up affords a good view of the gas tube, but exposes it as well. That may help with heat, but I can’t imagine it reduces weight by much. If you’re one of those people who wraps their thumb or fingers around the top of the hand guard, the edges of the abbreviated rail sections will get pretty uncomfortable pretty fast.

The rest of the hand guard is skelotonized, with M-LOK compatible sections down each side and the bottom. There’s a built-in QD sling attachment point a couple of inches in front of the magazine well, but none in front. (The same hand guard is also available in KeyMod.) Located on the left side of the 10S’s lower, the bolt lock/release button gave me a little trouble.

There’s a horizontal molded ridge circling on the top of the lower receiver. On the right side, that looks good and gives the user a good place to index the firing finger to keep it well away from the trigger. But that same line continues around to the left and goes a little too far back; the bolt lock/release is cut into it.

To lock the bolt back, you have to be careful to make sure you push the lever into the ridge — something I missed quite often. When the bolt is locked back, I could always get it to release with a solid palm slap — unless I was wearing hunting gloves. When that was the case, I missed it a few times as well, as the ridge shielded the lever.

The rear take-down pin is a good set up, with a recessed divot on a raised platform. There’s no problem pushing it out with your finger. The pivot pin requires some kind of object, like the point of a bullet, to help you push it through. The 10S’s magazine well is flared quite a bit, funneling AR-10 size PMAGs with ease. Unfortunately, straight out of the box, the supplied Magpul magazine wouldn’t drop free. They required a bit of a tug to release them from the lower. After a few dozen runse, the mag began to spring out when I depressed the standard mil-spec right side release — as it should.

The supplied Gamma VG6 muzzle brake (previously reviewed by Nick), does an exceptional job of turning recoil into noise and blast. At 8.2lbs, the Stag 10S isn’t particularly heavy, but it still has enough heft to knock out much of the recoil. The Gamma brake does the rest. The .308 is pleasant to shoot even in fast fire, and there’s no challenge in keeping the muzzle down.

Hearing protection is an absolute must, especially for everyone else on the range. The 10S is much louder beside the shooter than behind the gun. To prevent death stares, I recommend yanking the brake off the moment you get the 10S and installing a decent silencer. Easy enough, as the Republicans in Congress and the White House have made buying a silencer simple, cheap, fast and easy. Oh. Wait. I swapped out optics a few times, switching between a Sightmark Wolverine Red Dot, a Vortex Razor HD 1-6x and an Atibal Nomad 3-12. In this application, the Vortex is the one that shined. It offered a huge field of view, absolutely bomb proof reliability, a true 1X setting and enough magnification at its highest range to reliably take game out to 600 yards.

I ran all of the same drills with the Stag Arms 10S that I’d run with an AR-15. Shooting from the kneel, prone, turn and fire, barricades, walking and firing, the gun ran great. There were many times I thought “I wish I’d had this gun in-country instead of my M4”. I also remembered the reason I don’t have a mil-spec trigger on any of my AR pattern rifles: they’re not good.

Pulling the 10S’s trigger in slow fire, I felt some grit, a kind of catch (like a 2-stage trigger, but not quite), another wall, then a heavy release. I like single stage triggers in the 2½ to 3 lbs. variety. This is not that trigger. Stag claims the 10S’s trigger breaks somewhere between five and eight pounds. This one was closer to eight. While the Stag’s gas pedal took some getting used to, I was rewarded with surprising accuracy. And accuracy is one of the biggest reasons to shoot an AR-10: to project your will at a longer distances than you can with the AR-15’s smaller, lighter round.This is where many cheaper AR-10s fall down. Good reliability, mediocre accuracy. Not so the Stag Arms 10S.

For accuracy testing, I mounted the Atibal Nomad 3-12 scope. Turning it all the way up, I sat down and got to work with 200 rounds of mixed ammunition, shooting off a rest at 100 yards. I used a wide variety of commercial ammunition, including cartridges from Hornady, Federal, and Fiocci. The rounds varied in weight all the way from Hornady’s Custom Lite reduced recoil 125gr SST, (all you would ever need for White Tail Deer), to the Federal Gold Medal 185gr Juggernaut OTM (which completely fills the the magazine). It should be noted that several other rounds, including the time-honored and practically ubiquitous Federal 168gr SMK, shot at 1.25 inches on average. The Fiocci was the outlier; none of the other seven different rounds I tried even shot as large as 1.4” on average.

Knowing that a commercial round is going to print you 1.2-inch groups is a good thing. Knowing that just about any hunting round you pick up at the store will put you in the vitals of deer and other game all the way out past 400 yards is even better.

I put a full 500 rounds through this rifle, with help from a couple of other willing assistants. I had zero issues with feeding, firing, extracting, anything. A few different shooters shot the 10S from different positions, mostly in hurricane Harvey’s rain. After an initial spray inside the action and barrel with Rogue American Apparel’s Gun Oil, the rifle was never lubed or cleaned in any way. I’m supremely confident in this gun’s ability to pour out rounds.

Stag Arms is famous for making left-hand versions of AR pattern rifles. By the grace of God I wasn’t born with that inconvenient birth defect, so this version is the standard right-hand AR-10. You can get the exact same rifle in a left hand configuration. Regardless of which hand you use to fire the rifle, the Stag 10S is a quality .308 at a great price.

Style and appearance * * *
It looks a whole lot like mil-spec AR-15, only bigger. The furniture is functional with no fancy finishes or flourishes. The 10S is a working gun and it looks like it.

Customization * * *
For those of you only familiar with the AR-15 pattern, the AR-10 is a little more tricky. For the Stag 10S, you’ll need to keep the upper, lower, takedown pin, pivot pin, and takedown pin detent. The rest of the rifle can then be swapped with DPMS platform parts.

Reliability * * * * *
Perfect reliability over a wide range of commercially available rounds and weights, including shooting in soaking wet conditions.

Accuracy * * * *
Groups just over one MOA out of a gas gun is very good. It’s not the half-inch groups that some other guns will produce, but many of those are twice the price.

Overall * * * *
Perfect reliability, easy shooting, and better than average accuracy over a wide range of ammunition choices —  an exceptional value. With the 10S, Stag proves why they’re still doing business when so many other AR companies have come and gone.