OSS Suppressors is known for “flow-through” suppressor designs that greatly reduce backpressure for the firearm and gas blowback for the shooter. After many years of focusing on suppressing rifles, OSS has finally branched out into pistol silencers with the release of the RAD 9 and RAD 45 tested here. Silencer Shop was good enough to loan me both of these suppressors, and as always they remain the most streamlined way to buy a silencer at the best price. They have a staff of experts standing by to answer questions and guide you through the process, too.

I’d also be remiss not to thank Gary from OSS. He went out of his way to bring a different RAD 9 and RAD 45 out to the range on a different day, because I’m so stupid that I forgot to get photos or video of either of them in their short configurations while I had the loaner cans from Silencer Shop. To run the RAD 9 or RAD 45 in shorty mode, simply install the front cap onto the base module. For long configuration, install the front module and top it off with the front cap.

It probably goes without saying that full-length configurations are quieter, but that this comes at the expense of extra length and weight. Cup style, stainless steel baffles stack up and seal against each other. There is a first and a last baffle for each module, but the rest are interchangeable.

As you can see, this unique design allows gases to pass not only through the bore, as usual, but also around the outside of the baffles where it is spun down the suppressor’s length by those external fins on the baffles. No doubt this radial gas channel is where the RAD suppressors get their names. 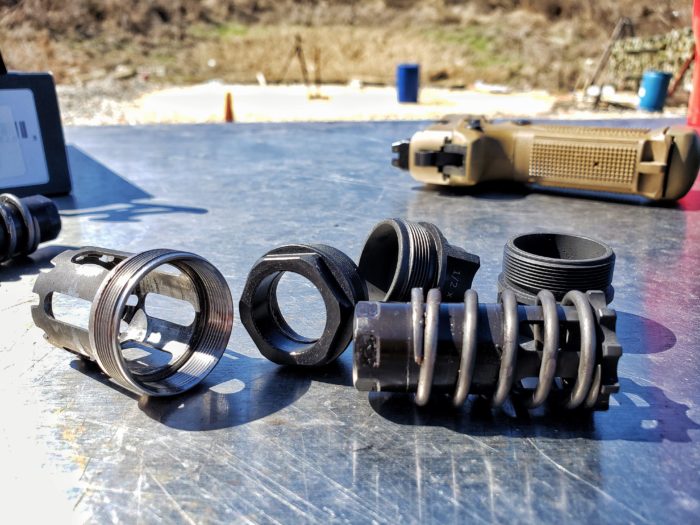 To accomplish mounting on all sorts of different host firearms, the RAD 9 and RAD 45 have a highly adaptable mounting system that obviates the need for a fixed barrel spacer. Booster pistons and fixed thread mounts are available, but the fixed mounts thread directly into the booster housing, which threads into the suppressor. Here you can see a 5/8×24 fixed mount screwed into the booster housing. That assembly then threads into the base of the RAD 9/45 and you’re ready to hit the range with a fixed-barrel gun like a pistol caliber carbine, pistol, or even a 300 BLK rifle. I shot the RAD 9 on my SIG P365. In full-length configuration it was about as quiet as a 9mm pistol suppressor gets. As close to that Hollywood WAP WAP as you’ll find on a semi-auto without running the can “wet.” In short configuration the RAD 9 was a fantastic match for my little P365. It looked and felt awesome on this micro-compact pistol. There aren’t many suppressors that don’t look ridiculous screwed to the end of a tiny pistol like this, but the RAD 9 in short config is unquestionably one of them.

It also sounded really good, as super short pistol cans go. Generally the design intention of a shorty mode like this is to get the suppressor to the shortest length possible while barely staying this side of 140 dB at the shooter’s ears, Hollywood be damned.

Often this is right at the edge of causing mild discomfort, which is the case with the two 9mm suppressors I own that are also super short (they’re slightly…half an inch…shorter than the RAD 9, mind you). While the RAD 9 was obviously much louder in short mode than long mode, it was quieter than my other two, similar suppressors and caused no discomfort at all. As most of y’all know, I’m not a Boomer. Which means I haven’t shot a whole lot of .45 ACP. But most of what I have shot I’ve shot suppressed, and the RAD 45 on this FN FNX-45 Tactical is quieter than I recall other suppressed .45 pistols being.

Quiet and smooth with a distinct lack of blowback. Sign me up. In short flavor the RAD 45 looks much cooler and handles faster and lighter. I was absolutely floored with its suppression performance. With both cans in full-size mode I found the 9mm ever-so-slightly quieter to my ears than the .45, but in short mode this changed. The RAD 45 remained what I’d generally refer to as quiet. In fact, it more closely aligned with my past experiences shooting suppressed .45 ACP. Needless to say I was extremely impressed here. I threw the RAD 9 with 1/2×28 fixed mount on my favorite machine gun setup (CMMG radial delayed blowback upper on a cheapo polymer lower) and went to town. It sounded great and it ran great with no noticeable gas blowback or noticeable change to this setup’s rate of fire. It was also cooler to the touch afterwards than I expected. After a louder first round due to oxygen in the suppressor causing some “first round pop,” I was again very impressed with how quiet these OSS cans are. It sounded like suppressed subsonic 300 Blackout does with the majority of dedicated .30 cal rifle silencers. For good measure I also ran the RAD 45 on this 9-inch 300 BLK. It was louder by just enough to tell a difference — still a quiet setup. Completely and totally comfortable, and definitely quiet enough to confuse hogs, deer, etc. as to what’s going on or where the noise is coming from. Both the OSS RAD 9 and the OSS RAD 45 can be run with a wipe (they weren’t designed with it in mind, but a 3/4-inch diameter rubber washer happens to fit in the baffle just before the front cap), which typically takes the form of a rubber gasket or washer near the nose of a suppressor. By forming exactly to the diameter of the bullet — sometimes even flexing open while the bullet passes through and then closing behind it — a wipe more efficiently “wipes,” strips, and seals gas from the projectile and keeps it contained in the can for longer. I shot the RAD 45 on my 9mm P365, both with and without a wipe, in both full length and short configurations, and again I was impressed by the performance. A little bit more first round pop than the RAD 9 on the 9mm, but after that the two suppressors perform very closely with the 45 just barely louder. Hard to notice, really, but not as quiet as the superbly quiet 9 on 9.

As for the wipe, it barely made a difference assuming any difference I heard wasn’t just placebo anyway. The suppressor is so quiet and efficient already that adding the rubber washer in the business end did nothing appreciable. If I were to pick only one of these suppressors, I’d pick the RAD 45. Considering how closely it comes to matching the stellar performance of the RAD 9 on 9mm and 300 BLK, but how much more versatile it is with its ability to shoot .45 ACP, 10mm, .40 S&W, etc., I’d go with the larger bore.

You can’t go wrong either way, though. OSS Suppressors’ new RAD 9 and RAD 45 are fantastic pistol cans and I was highly impressed with both. Hit up Silencer Shop to learn more about these silencers and about any aspect of the purchasing and ownership process.

Overall  * * * * *
The OSS RAD 9 and RAD 45 do everything a pistol suppressor should do, and it does it all extremely well. Add to that a modular design, including a great mounting system, and really impressive suppression performance on multiple calibers all with a distinct lack of gas and particulate blowback and it’s a recipe for a well-deserved five-star rating.