While packing up my desk for a recent move, it dawned on me that my pen holder of the past eight or so years was actually a New Frontier Armory stripped polymer lower receiver this whole time. A day later and an M16 full-auto fire control group, the appropriate federal licensing, and some curiosity combined to find out if a $22.99 AR-15 lower receiver made of fiber reinforced plastic was durable enough to form the foundation of a machine gun. 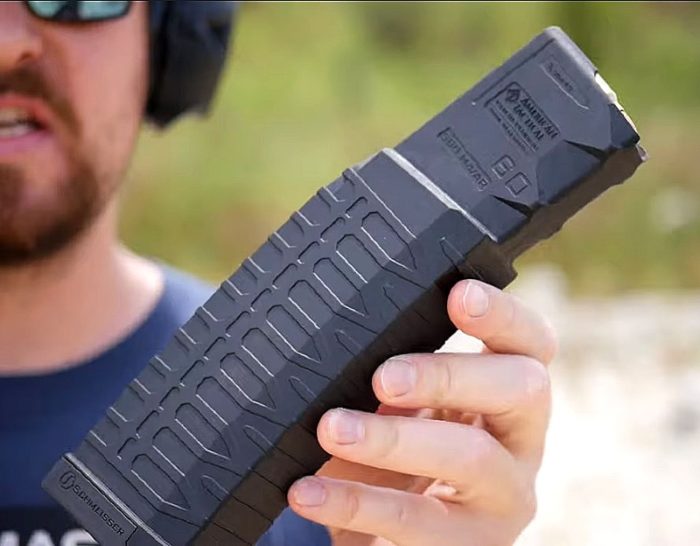 Coincidentally I had also just purchased a few ATI Schmeisser S60 magazines (available at Brownells HERE) and figured testing ’em out at full-auto speed was just about perfect. The S60s loaded up 60-rounds-deep more easily than I anticipated, though for sure the spring system is stiff and once you hit about 40 rounds there’s a bit of a thumb workout involved.

If you’re cleaning these bad boys watch out when you pop that baseplate off! The large spring in the quad-stacked section uncorks like a coked out genie. Keep a handle on it, and keep your face out of the way.

With an old tank of a YHM suppressor screwed onto the business end, I proceeded to dump 120 rounds through the polymer wonder with only enough time in-between magazines to move my camera around. The upper was screaming freakin’ hot, and the finish was burned off about 1/3 of the silencer.

The action shots are in the video embedded at top, of course, but the punchline is that, after the upper cooled down enough for me to touch and remove, the New Frontier Armory lower was absolutely fine. 100% just as good as new in every last way.

Which is not a surprise. An AR-15 lower receiver doesn’t typically have much in the way of demands put on it. It holds the magazine in its place in space, it holds the trigger in its place, and it holds the receiver extension and stock where they belong. Your shoulder is supposed to support the stock under recoil, so even that rear threaded area of the receiver has a fairly easy life if you’re shooting the rifle in a normal fashion.

Frankly, you could (and should) make a lower out of wood and it would be totally fine. Yes, I promise I’ll do it.

Likewise, the ATI Schmeisser magazine performed flawlessly. I did have a failure to fire stoppage somewhere in the middle of the ATI-fed 60 rounds, but the round stripped properly and chambered fully, so it was a trigger or hard primer issue and nothing magazine-related. Since this range day I’ve shot the S60s a bit more and have had zero issues. They appear to feed reliably, feed strongly enough to keep up with full-auto, and are very high quality.

If an area on this polymer lower was going to fail eventually, I believe it would be around the pivot pin. After 120 rapid-fire, select-fire rounds the chamber area and barrel nut area of the upper had heat soaked pretty thoroughly and that heat was beginning to migrate into the pivot pin area of the lower. At some point I believe it would soften up and then begin to melt.

That said, it’s possible that under non-stop full-auto fire the gas tube or another component in the upper may well fail first.

Is a polymer lower sufficient for machine gun use? Yes, yes it sure is. Though I may return this one to pen holder duty.