Suppressor technology has come a long way, and it’s the rare exception, indeed, that isn’t hearing safe when shot dry. Even so, you may still want to shoot your suppressor wet. But what does that mean, anyway, and what the heck is ablative?

A firearm silencer/suppressor quiets a gunshot primarily by slowing down, expanding (in a controlled fashion), and cooling high-pressure combustion gases before they leave the suppressor. This massively reduces the pressure — from thousands of pounds per square inch to dozens — thereby reducing the loud “bang” of a gunshot. Think of popping a champagne cork versus easing it open, or popping a balloon versus letting the air out the mouth.

All of this energy must be sucked out of the muzzle gases by the “can” before the gas leaves the suppressor. And that gas is moving damn fast. We can help the suppressor do its job by using an ablative medium — material that pulls heat out of hot gas better than metal does.

In this context, we’re more or less borrowing the word “ablative” from the fire protection and aerospace industries, where it’s used to describe a sacrificial medium designed to absorb and disperse heat by evaporating or burning off. Converting a liquid, gel, or solid into a gas takes energy. And taking energy from the ammo combustion gas is our goal.

Shooting a suppressor “dry” means shooting it as-is. Nearly every modern suppressor on the market is optimized for shooting dry (notable exception), and, unless it’s specifically stated otherwise, any decibel rating information you see is with the suppressor dry.

Shooting a suppressor “wet” means shooting it with ablative media added to the inside. This will typically reduce the sound volume by an additional three to 10 dB versus shooting the same suppressor dry. Don’t worry, you don’t [yet] have to register ablative under the NFA.

As a reminder, reducing sound by three decibels technically cuts the sound intensity level by half. Reducing it by 10 decibels, to most people, cuts the perceived noise level in half. So, while going from 131 dB to 121 dB may not look like a lot on raw numbers, to your ears (and brain) it’s a pretty huge change. Stated in the opposite manner, 131 dB sounds twice as loud as 121 dB. The most common ablative medium for use in suppressors is good ol’ water. It’s an extremely effective choice, but it has some downsides. Namely, it’s thin so it leaks out and typically blows back out of the action to varying degrees while shooting. It also evaporates quickly — a reason it’s so effective — so, in most cases, it can’t be added to a suppressor far in advance of shooting as it will be gone by the time you shoot.

The most popular alternative is wire pulling gel, aka cable pulling lubricant. This stuff is cheap and can be found at most hardware stores, online, and, certainly, at electrical supply stores. Its normal use is to lubricate wire or a cable before pulling it through a tight-fitting insulation or protective sleeve.

The consistency of these gels/lubricants varies from thin like liquid dish soap to thick like waxy petroleum jelly. Downsides can be mess and smoke. The thin stuff is cleaner, the thick stuff stays in place better and doesn’t evaporate.

What I use is seen above: ultrasound gel. It’s easiest to find online (I buy this stuff on Amazon and three tubes lasts a long time) and though it’s a bit more expensive than most wire pulling gel it’s still just pennies per use. Plus, ultrasound gel does have some advantages.

Ultrasound gel is clean. Really clean. And safe. Plus chicks dig it. Pregnant ones, in particular. Seriously though, it wipes cleanly off skin and it burns cleanly out of your suppressor; no residue, no smoke. It’s thick enough to stay in place pretty well, but it’s watery enough to boil off rapidly and suck lots of heat out of your muzzle gases lickety-split. It’s fairly ideal. If your suppressor disassembles, great. This allows access to each baffle for manual application of ablative. About 5cc of ablative (approximately the amount a plastic bottle cap holds), regardless of flavor, is enough to make a big difference.

If your suppressor doesn’t disassemble, no worries. As those ammo combustion gases are hottest and under highest pressure closest to the firearm’s muzzle, ablative tends to make the biggest sound reduction difference when applied in the first part of the suppressor anyway.

Depending on caliber, barrel length, suppressor design, ablative material, amount of ablative, and other variables, you can expect five to 30 rounds of extra quiet shots before the ablative has completely evaporated and burned away and volume levels return to normal, “dry” levels. SAFETY NOTE: there is absolutely such a thing as too much ablative. Unlike air, these mediums do not compress. Empty air space is still a must inside most suppressors.

Too much ablative can lead to increased internal pressures and even a popped suppressor. The risk of this is significantly higher with centerfire rifle calibers than with pistol calibers. Five cubic centimeters of ablative is considered conservative and safe, but always follow manufacturer recommendations and guidance.

Additionally, it’s best not to block or impede the bore — the bullet’s path. We want it to fly straight for obvious reasons, and certainly don’t want to deflect it so badly that it strikes a suppressor baffle. With ablative, as with everything, enjoy in moderation. 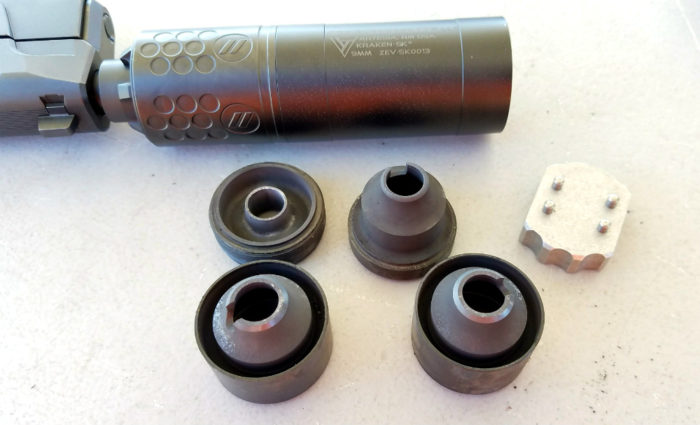 Seen above are the baffles of my CGS Group Kraken SK after 90 rounds of shooting wet with ultrasound gel applied to each baffle every 30 rounds. I think they’re actually cleaner than they were prior to shooting this suppressor wet for the first time.

Just as sound reduction wet vs. dry varies with ammo choice in this particular suppressor, so will the difference between shooting dry and shooting wet vary in other cases. Suppressor design, caliber, barrel length, specific ammunition, environmental factors, ablative medium type and quantity, and more will effect the end result.

So go out and experiment! Safely. If you’re unsure, contact your suppressor manufacturer for guidance or consult the experts at Silencer Shop.