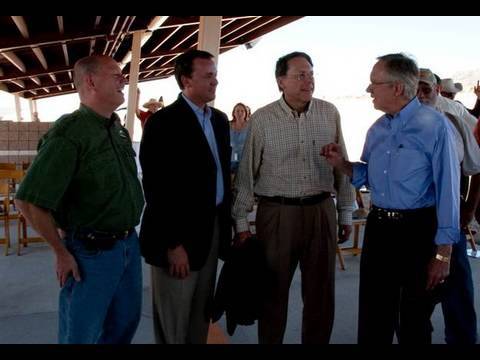 Full disclosure: I’m a Life Member of the NRA. Full(er) disclosure: that could change, if the NRA keeps doing incredibly stupid things. Case in point, the idea that they might well endorse Harry Reid’s re-election campaign for the U.S. Senate in Nevada. Yep. That’s right. On the heels of their bailing on opposition to a bill that would effectively muzzle political dissent (except for Unions, AARP, and the NRA) simply because “it doesn’t affect them,” now comes word that Really Soon Now, the NRA plans to endorse Harry the Horse’s Ass for another term in the U.S. Senate, and presumably as Senate Majority Leader (unless the GOP retakes the Senate in November).

Pause with me for a nanosecond whilst we consider how screwed up this really is.

The NRA would have you believe that the Reid-a-Saurus Rex is a friend to gun owners everywhere, and is a long-time support of We the People’s 2nd Amendment rights. Um…not so much. Turns out the NRA is mucho grateful for a $61,000,000.00 earmark (that’s PORK to you and me) that the Harrynator put in for a gun range in Nevada.

So if you’re keeping score, this means that not only is the NRA willing to sell their soul for the price of a gun range (okay…a really nice gun range), but they are also willing to line up at the pig trough, as Mr. Personality brings home the bacon, for a cool $61 mill to Nevada, from which you and I will never see benefit one (unless we happen to go shooting in Nevada).

But no!, claims the NRA. It’s not about bringing home the Benjamins, Home on the (Gun) Range. It’s all about Reid’s stellar support for the 2nd over the years. Huh? Reid’s opponent, Sharron Angle, is leading in the polls, and for an incumbent – especially an incumbent Majority Leader – that ain’t good. By all rights, Reid should be kicking back and counting the slush fund coin, instead of fighting for his political life. But in a year which will be remembered in history as the one where we Threw the Rascals Out, Reid looks, at least for now, as The Biggest Loser.

So what about it, NRA? Why endorse Reid? With the money in your coffers, surely $61 mill isn’t that big of a card to play. So let’s take a look at his record, with some stats compiled by Erick Erickson and the fine folks over at Red State:

Below are just a few of the votes that demonstrate Reid’s longstanding hostility to guns and the Second Amendment. Not included in this list is the long list of consistent and active support for anti-gun nominees to the Federal Judiciary and to high level cabinet posts. The reason I did not include anti-gun nominees is because he supported every last one of them.

October 21, 1993. Vote 325. Voted to eliminate the Army Civilian Marksmanship Program.Only the most fringe anti-gun Senators voted for the amendment.

November 19, 1993. Vote 385. Allow states to impose waiting periods over and above the 5 days waiting period required under the Brady Bill.

November 20, 1993. Vote 394. Voted for the Brady Bill, which imposed a 5-business-day waiting period before purchasing a handgun.

August 25, 1994. Vote 294. Voted to close off debate on the Clinton Crime Bill, which contained the ban on so-called “assault weapons.”

April 17, 1996. Vote 64. Voted to expand the statute of limitations for paperwork violations in National Firearms Act from 3 years to 5 years.

May 12, 1999. Vote 111. Voted to give the Treasury Department expansive new authority to regulate and keep records on gun shows and their participants, and criminalize many intrastate firearms transactions.

May 14, 1999. Vote 119. Voted to criminalize internet advertisements to sell legal firearms in a legal manner.

May 20, 1999. Vote 134. Voted to give the Treasury Department expansive new authority to regulate and keep records on gun shows and their participants, and criminalize many intrastate firearms transactions. The vote was 50-50, with Vice President Gore casting the tie-breaking vote.

May 20, 1999. Vote 140. Voted for the Clinton Juvenile Justice bill, which contained a package of gun control measures.

July 29, 1999. Vote 224. Voted to close debate on the Clinton Juvenile Justice bill, which contained a package of gun control measures.

February 2, 2000. Vote 4. Voted to make firearms manufacturers and distributors’ debts nondischargeable in bankruptcy if they were sued because they unknowingly sold guns to individuals who used the gun in a crime. 68 Senators voted against Reid’s position, including 17 Democrats including Bryan of Nevada.

March 2, 2000. Vote 27. Voted to say that school violence was due to the fact that Congress “failed to pass reasonable, common-sense gun control measures” and call for new gun ownership restrictions on the anniversary of the Columbine shootings.

March 2, 2000. Vote 28. Voted to say that school violence was due to the fact that Congress “failed to pass reasonable, common-sense gun control measures” and call for new gun ownership restrictions on the anniversary of the Columbine shootings (reconsideration of vote 27).

March 2, 2000. Vote 32. Voted to use Federal taxpayer funds to hand out anti-gun literature in schools and to run anti-gun public service announcements.

April 7, 2000. Vote 74. Voted against an amendment to provide for the enforcement of existing gun laws in lieu of new burdensome gun control mandates.

May 16, 2000. Vote 100. Voted to commend the participants of the so-called “Million Mom March” for their demand for more Federal restrictions on firearms ownership, and to urge the passage of strict gun control measures.

May 17, 2000. Vote 102. Vote to overturn the ruling of the chair that the Daschle amendment(commending the participants of the so-called “Million Mom March” for their demand for more Federal restrictions on firearms ownership, and to urge the passage of strict gun control measures) was out of order.

May 17, 2000. Vote 103. Voted against an amendment stating “the right of each law-abiding United States citizen to own a firearm for any legitimate purpose, including self-defense or recreation, should not be infringed.”

May 17, 2000. Vote 104. Voted for an amendment commending the participants of the so-called “Million Mom March” for their demand for more Federal restrictions on firearms ownership, and to urge the passage of strict gun control measures.

March 5, 2009. Vote 83. Voted against a ban on the United Nations imposing taxes on American citizens after France and other world leaders proposed a global tax on firearms.

It doesn’t take a genius to see that Reid is anything BUT a friend to gun owners. So the question remains, why endorse Reid? Has the NRA gone mad? Are they so far “inside the Beltway,” that they can’t tell this deal from Shinola? Here’s an idea: make them explain themselves. If you wanna know why the NRA has this man-crush on Reid, call the NRA TODAY at 1-800-392-8683. You can either leave a message on their recorder, or wait to speak to a corporate toady live person and listen to them stammer out an excuse. Please…make the call. I don’t wanna regret that Life Membership for the rest of mine…