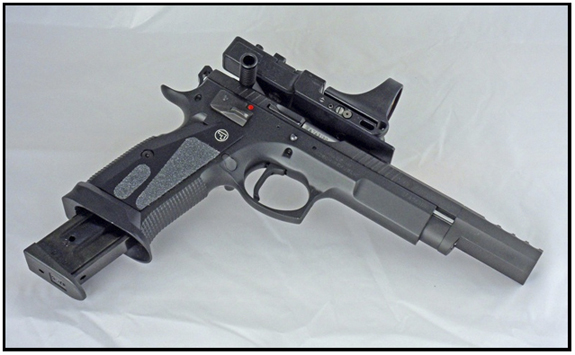 With all the options for customizing firearms these days –  recoil springs, triggers, custom barrels, enhanced magwells, magazine releases, and grip modifications – you’re just as likely to see a modified guns when you look around at the other shooters at the range as you are stock models. Shooters alter their firearms for a variety of reasons. Most modifications increase performance or reliability, while others serve to add to the gun’s utility. And let’s be honest, some shooters just want a cooler looking gun. While enhancing a firearm may seem like a win-win scenario that’s not always the case . . .

Why customize?
There’s no shortage of reasons to customize a gun. Unfortunately, plenty of alterations are made to make new guns just to get them to be reliable. Too many firearms come from the manufacturer in a, well, less than ideal state. They may have poor sights, a crappy trigger or any number of flaws right out of the box.

Most of the customization jobs you’ll see, though, are done in the competitive shooting world. Action pistol competitors shoot highly modified race guns that are to stock firearms what Tony Stewart’s NASCAR Impala is to an off-the-lot Chevy. Other than the model nameplate, virtually every part is new or improved in some way. These upgrades are done to stay ahead of the competition and improve the shooter’s performance. When done well, customization can make an average gun good, and a good gun better.

Why not customize?
If customization can make a firearm perform better and meet a shooter’s needs, why shouldn’t you modify it? Reliability, for one. Defensive firearms serve a singular purpose – to be available and functional when they are really needed. Many alterations that increase performance on a good day can also serve to decrease reliability when you really need the gun to work most .

I have no qualms with throwing my standard issue Glock on the ground, and I expect it to function flawlessly even if covered in dirt and grit. A finely tuned bespoke racegun, on the other hand, will probably malfunction pretty quickly after being subjected to the kind of abuse that would only make my Glock laugh and ask for more.

Training
Any customization that changes a gun’s manual of arms – including enhanced magwells, extended magazine releases, larger slide stops, safeties, or even improved triggers – can result in the user needing a significant amount practice to become proficient. While most of these mods will make a pistol’s operations easier, they can also create dependence. If you ever have to fall back on a standard model, you can find yourself fumbling around rather than shooting.

For these reasons, I prefer to keep my guns fairly standard. I don’t like to rely on crutches and I would prefer to be able to perform well with any gun I pick up than just my special custom-built model. You’ve probably seen Top Shot competitors demonstrate this concept when they’ve totally flopped as soon as they were handed anything other than their specially tuned competition gun. Ever wonder why you don’t see the Special Forces operators running around with tricked out race guns? They can’t always control their circumstances and have to get the job done, whatever the environment.

There are plenty of other considerations when deciding whether to customize your firearms. Customize if you want to, but consider that customizations can be a crutch, and learning to shoot again without that crutch can be a difficult proposition.

So come clean…what modifications have you make to your firearms?

Nick Savery is the author of www.IndestructibleTraining.com, a blog discussing integrating training across a variety of systems and platforms for the purposes of self-defense.