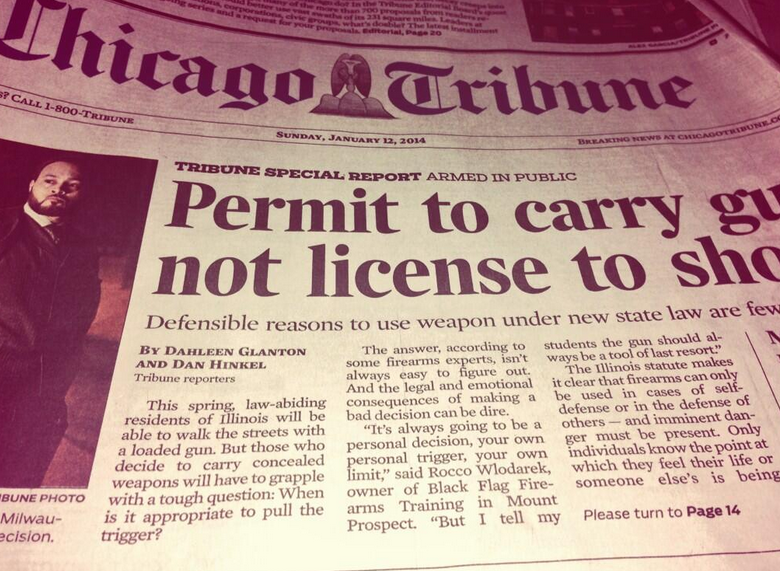 I’ve written before about the difference between feeling safe and actually being safe, but it’s a concept around which most in the anti-gun population will never be able to wrap their heads. Their entire argument is based on emotion, so asking them to think rationally about the issue is like asking a cat to recite a Shakespeare sonnet. A new poll was released on Monday reinforcing this disconnect between logic and emotion in the Windy City, as apparently 55% of Chicago residents feel “less safe” now that concealed carry is legal.

The numbers coincide with a rise in Chicago shootings this summer — headline-making cases include the tragic death of 11-year-old Shamiya Adams — and a decline in Mayor Rahm Emanuel’s job approval rating. The Trib reported last week that his rating slipped from 50 percent around this time last year to a current low of 35 percent, revealing significant dissatisfaction with how the incumbent Democrat — up for re-election this February — is handling the city’s myriad problems, crime being one of them. The mayor blames “economic stress” for his poor reviews.

There are two problems here.

First, despite Chicago residents having been conditioned over decades to fear “concealed carry killers” thanks to the civilian disarmament extremist crowd, people with a concealed carry permit are FAR less likely to commit a murder than even the police. In reality, Chicago citizens would be more justified in their lack of perceived safety if Rahm Emanuel put more cops on the streets as opposed to legalized concealed carry, but the population has been so well conditioned to think that all guns are evil and all gun owners are criminals that their perception of the situation in no way matches up with reality.

The second issue is that the NBC article conveniently correlates the availability of concealed carry permits with a “rise in Chicago shootings this summer.” I’ll give you a hint: no one involved in those incidents had a concealed carry permit. If someone with a legal concealed handgun permit went on a shooting spree in Chicago we’d hear about it non-stop from the Moms Demand Action crowd, but they have been oddly radio silent on this issue. NBC, just like the gun control establishment, believes that guns cause crime, and if we could just remove all firearms from the world then we would have finally achieved that utopian ideal where everyone is naturally good and kind to each other.

There’s just one problem: life is indeed nasty, brutish, and short. There really is true evil in the world, and the availability of firearms (on balance) does vastly more to allow individuals to protect themselves than contributes to the commission of crimes. But, of course, NBC doesn’t see it that way. To NBC and their ilk, firearms are a talisman of evil — a magical item that forces the holder to commit crimes. Without that firearm, those same criminals would have been perfect law-abiding angels helping old ladies across the street. I think not.

Perception is reality. It doesn’t matter if the crime rate plummets and murders become few and far between — we still have our rights on the chopping block so long as the public perceives our ability to defend ourselves as a threat to their safety. There is one silver lining to this story, namely that the percentage of people in Chicago scared of concealed carry is only 55%. While it’s a solid majority, it’s not everyone. With some luck, hopefully they too will start to realize that law abiding citizens are not the issue and come around on the gun rights issue. A man can dream, anyway…